Showing posts from July, 2022
Show all

Geography of War - The Battle of Yehuling 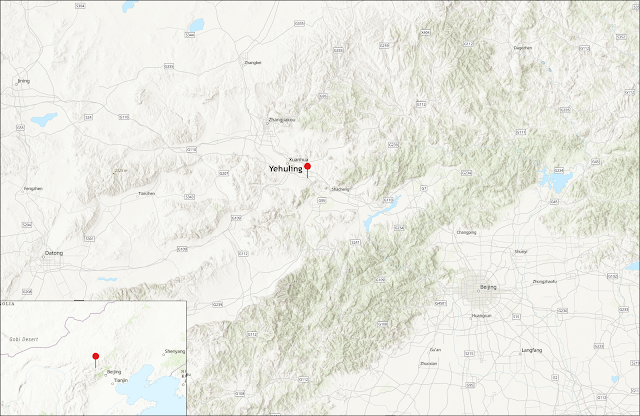 The Battle of Yehuling (Mongol-Jin War) Date: August-October, 1211 Modern Location: Northern China (NW of Beijing) Combatants: The Mongol Empire (led by Genghis Khan) vs. Jin China (led by Wanyan Chengyu) Summary: In the year 1211, Genghis Khan was on a mission.  After emerging victorious five years earlier from a bitter struggle to assume leadership of the Mongol confederation to the north and then defeating the rival Tatars to the east, he set his sights south towards the Chinese Jin empire.  Although the majority of the Jin population were ethnically from the Han and Khitan people groups, the emperor and leadership came from the Jurchen people group, originally from Manchuria.  Khan was unimpressed by the new Jin emperor who had ascended in 1208, named Xingshing, and publicly insulted him as an ineffective and cowardly ruler.  Emperor Xingshing, on the other hand, focused his defenses against the southern Song dynasty did not consider the Mongols to be a legitimate threat even after
Post a Comment
Read more

Geography of War - The Battle of San Jacinto The Battle of San Jacinto (Texas War for Independence) Date: April 21, 1836 Modern Location: Southeast Texas, United States Combatants: Republic of Texas (led by General Sam Houston) vs. Mexican Republic (led by President Antonio Lopez de Santa Anna) Summary: The month after the fall of the Alamo, which cost the lives of such popular soldiers as William Travis, Davy Crockett, and Jim Bowie, the armed forces which represented the Texas Revolution were in full retreat.  As the army under the command of Gen. Sam Houston moved eastward towards the Louisiana border, fearful citizens began fleeing in what became known as the Runaway Scrape.  Trying to outrun the oncoming Mexican army on foot, settlers burned whatever they could not carry and even threw artillery pieces into rivers to prevent them from being used by the enemy.  Houston did not believe his volunteer soldiers were prepared to face the professional Mexican army, but the Texians (as they called themselves) were motivated to attac
Post a Comment
Read more

Geography of War - The Battle of Teutoburg Forest The Battle of Teutoburg Forest Date: September, 9 (AD) Modern Location: Northwest Germany Combatants: Roman legions (led by Publius Quinctilius Varus) vs. Germanic tribes (led by Arminius) Summary: In 55 BC, Julius Caesar built bridges across the Rhine River to engage Germanic tribes on their own soil.  The northern extent of Rome was expanding, and the area that currently encompasses northern Germany was a formidable but enticing target.  Pushing the boundary if their frontier from the Rhine to the Elbe took 60 years of fighting, but by 7 BC the tribes in the area were largely pacified and Romans were more involved in colonizing than conquering.  Part of the strategy employed while subduing enemies included taking young hostages back to Rome for education and military training, then returning them to their native regions to communicate and negotiate with the peoples near their homes.  One such hostage was named Arminius, the son of the chief of the Cherusci tribe.  By the time he retu
Post a Comment
Read more

Geography of War - The Attack on Pearl Harbor 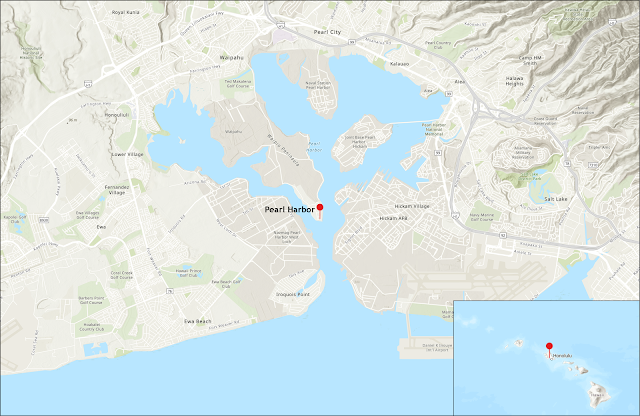 The Attack on Pearl Harbor (World War II) Date: December 7, 1941 Modern Location: Oahu, Hawaii, USA Combatants: Japan (led by Admiral Isoroku Yamamoto) vs. United States (led by Admiral Husband Kimmel and Lieutenant General Walter Short) Summary: On the morning of December 7, 1941, the United States was not at war.  Negotiations with the Japanese Empire, who was upset that the Americans had cut off oil and other exports to their island nation in the midst of their war with China, had been ongoing for several weeks but remained largely unfruitful.  In need of such resources, the Empire planned for a contingency - a preventative strike against the United States and their Pacific Fleet.  By setting out while peaceful negotiations were ongoing and attacking before a declaration of war, Pearl Harbor cannot be considered a battle and those Americans who were involved were technically non-combatants.  The quite of a Sunday morning was broken a few minutes before 8 am when the first Japanese d
Post a Comment
Read more
More posts