Geography of War - The Battle of San Jacinto

- July 18, 2022
The Battle of San Jacinto (Texas War for Independence)
Date:
April 21, 1836
Modern Location:
Southeast Texas, United States
Combatants:
Republic of Texas (led by General Sam Houston) vs. Mexican Republic (led by President Antonio Lopez de Santa Anna)
Summary:
The month after the fall of the Alamo, which cost the lives of such popular soldiers as William Travis, Davy Crockett, and Jim Bowie, the armed forces which represented the Texas Revolution were in full retreat.  As the army under the command of Gen. Sam Houston moved eastward towards the Louisiana border, fearful citizens began fleeing in what became known as the Runaway Scrape.  Trying to outrun the oncoming Mexican army on foot, settlers burned whatever they could not carry and even threw artillery pieces into rivers to prevent them from being used by the enemy.  Houston did not believe his volunteer soldiers were prepared to face the professional Mexican army, but the Texians (as they called themselves) were motivated to attack Santa Anna's forces by reports of massacres that had taken place in both the Alamo and Goliad.  On April 17, 1836, a fateful decision was made.  Upon reaching a small town named Harrisburg, which was little more than a ferry point across Buffalo Bayou, the retreat would either continue eastward towards Louisiana or southward towards Galveston Island.  The former route may have meant safety within the border of the United States, but it meant the end of the newly-proclaimed Lone Star Republic.  The latter route would lead to a battle, as there would no longer be an avenue available for retreat.  The provisional government led by David Burnet was in the process of escaping the mainland to fortify themselves on Galveston Island.  Without orders, discussion, or protest, the soldiers marched south. 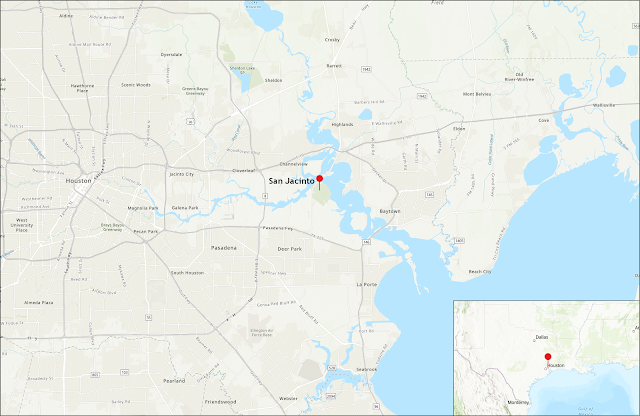 The delay had created a few advantages for Houston's forces.  His numbers increased as many settlers abandoned their homes in retreat and took up arms.  He was able to train his men, both the new recruits and the more seasoned soldiers.  Two donated cannons had arrived from Cincinnati, OH that became known as the Twin Sisters, which gave Houston at least some artillery support.  And Santa Anna had separated his troops into several smaller groups to accomplish different goals as they tried to capture the revolutionary government while also trapping and defeating the Texian army.  Arriving at a point along Buffalo Bayou named Lynch's Ferry, Houston set up camp in a wooded area on April 20.  Arriving just a few hours later, Santa Anna made the foolish decision to ignore the advice of other military commanders and set up camp in a field, backed up by woods, a lake, and marshes along San Jacinto Bay.  Confident in his advantage after a minor skirmish, the Mexican general even neglected to post sentries.  The next morning, reinforcements arrived under the command of General Martin Perfecto de Cos to swell Santa Anna's ranks to an estimated 1,300-1,500 men, compared to Houston's total of 800-900.  Undaunted, the Texians decided to destroy the only bridge that could be used for either reinforcements or retreat, and launched an afternoon attack which literally caught their enemy napping.  The Twin Sisters fired a single volley into the Mexican camp at 4:30 pm as the battle began, and Houston's infantry charged quickly across the limited breastworks Santa Anna's forces had built.  Within 18 minutes the Mexican army had fled the field in full retreat as the Texians gained control of their camp.  With no means to escape, the scattered Mexicans were hunted down over several hours.  Santa Anna's aide, Col. Juan Almonte, rallied a group of soldiers to stage a final last stand, which was overrun by the vengeful Texians, still crying out "Remember the Alamo!  Remember La Bahia (Goliad)!"  In all, over 600 Mexicans died and more than 700 were captured, while Houston lost fewer than 10 men.  Santa Anna himself was captured the next day wearing a private's uniform, and when his own men gave away his identity by saluting him as "el presidente" many of Houston's men urged for the opposing general to be executed for his atrocities.  Houston spared his rival and over the course of several weeks negotiated the Treaties of Velasco that put an end to the war and virtually ensured Texan independence.
Scene of the battlefield, from the view of Houston's camp: 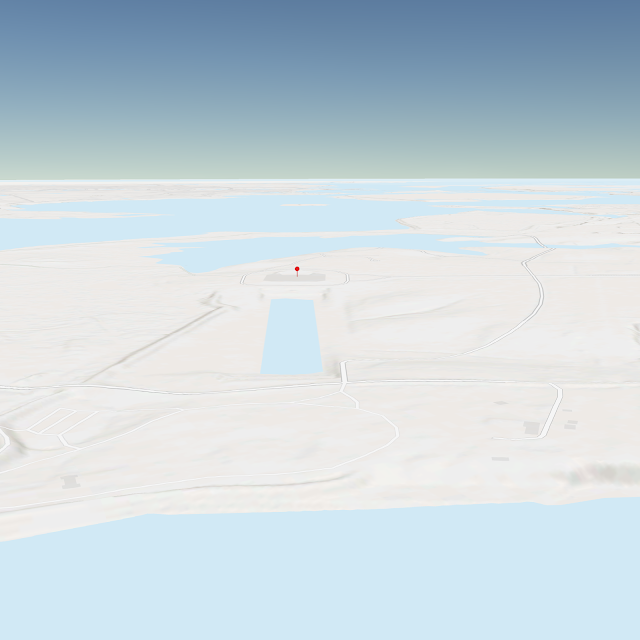 Geography:
The most important geographic feature was the marshland where the battle took place.  Familiar to the Texians but alien and uncomfortable to the Mexicans, the swampy conditions that had been exacerbated by recent rains made troop movements quite difficult (and retreat nearly impossible).  Santa Anna's decision to place his camp in a position where there was little room to fall back and regroup meant that his decision not to place sentries would be a fatal error from where there could be no recovery.  Unarmed men who had been awakened attempted to flee across bodies of water, only to be shot or overtaken.  The slight hill between the two camps, which is now disguised by the large monument that has been constructed on the site, also served to hide the advancing troops until they had closed to within 200 yards of the Mexican camp.  Finally, the steady rain across the low-lying terrain served to prevent any additional reinforcements from being able to join the fight or relieve Santa Anna.

Result:
The battle was incredibly lopsided and hardly any Mexican forces escaped.  As a result of the battle and subsequent treaties, Texas secured its independence as a nation.  To save Santa Anna from being executed, the acting government sent him to Washington D.C. rather than allowing him to travel back to Mexico.  By the time he arrived home again, he discovered that he had been deposed and was disgraced by newspapers throughout the country.  When the United States agreed to annex the Lone Star State, including claims on all lands south to the Rio Grande, Mexico objected to the agreements that had been made by their former president and the two nations were soon embroiled in the Mexican-American War.  As a result of that conflict, the United States would claim additional territory that stretched all the way west to California's Pacific coast - nearly 1 million square miles of land.