Showing posts from January, 2019
Show all

Our Story With God, Episode 5: Path to Egypt (Part I)

- January 29, 2019
Welcome back for a new week, and now we're ready to start a new month as well!  God made a covenant with Abraham, but it wasn't until the birth of Isaac that he had any tangible proof that God was fulfilling His promises.  One of those guarantees was that his offspring would be oppressed in a foreign land for 400 years.  That turned out to be Egypt.  In this episode we look at how the family grew and see that each generation, while they had many problems, continued to worship God.  The dysfunction among them unfortunately caused division and pain, but at last Joseph brought his entire family to Egypt to save them from famine (forgiving the brothers who had been so cruel to him).  God's story continues to march forward exactly as He said. Our Story With God, Episode 5
Post a Comment
Read more

Our Story With God: Abraham's Travels 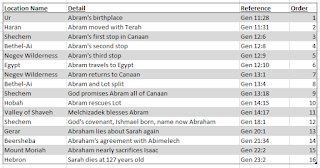 Hello to all my viewers!  I've put together a quick visual of Abram's (later Abraham's) travels throughout his life.  Take a look and let me know what I can do to make this more useful for you.  Making maps is what I do to pay the bills, so happy to customize these as needed.  The labels are fairly small in the animation (especially when viewing on a mobile) so I'm also including some images to help you out as well. Our Story With God: Abraham's Travels (Vimeo)
1 comment
Read more

Our Story With God, Episode 4: The Call of Abram

- January 22, 2019
Once the flood waters receded, mankind once again began to populate the world.  At first, a group of them decided to settle together in the plain of Shinar (what we'd call Mesopotamia) and build a tower - Babel.  God prevented them from finishing, but enough people stayed in this region to build several large cities.  Among these was Ur.  For some reason, God called one man from this place - Abram.  An older man with a substantial amount of herds, servants, and other material goods, the one thing he lacked was a child.  Without the benefit of a Bible or other knowledge of God, he nevertheless did what he was told and believed God in everything He said.  Abram had good moments (building altars, following instruction) and bad (lying about his wife, having a child with a servant) but God chose this man to establish a covenant - he made promises as the stronger party, asking nothing in return from the vassal.  Through God's faithfulness to Abram, the whole world would be changed.
Post a Comment
Read more

Our Story With God, Episode 3: Noah

- January 15, 2019
It's a story everyone seems to know - Noah built the ark to save his family and two of every living creature from the coming flood.  Sin had taken a terrible toll on humanity, to the point where judgment was coming.  But what does God want to show about Himself?  And how does this point ahead and give us hope, several thousand years later? Our Story With God: Episode 3
2 comments
Read more

Our Story With God, Episode 2: The Downfall of Man - Sin

- January 08, 2019
After God finished the work of creation and called it "very good", what happened?  Why (and how) did a breach in our relationship form?  The refusal of humanity to follow a single rule introduced sin - the lawless rejection of God - into the equation.  It's a sad twist in the story, but is critical to understand before we can fully appreciate the solution that God provides.  For some extra thought exercises, look at the difference between God's rule and Eve's explanation.  How long do you think the two were in the Garden of Eden before being removed?  Send me comments, I'd love to hear from you!  Our Story With God: Episode 2
1 comment
Read more

Our Story With God, Episode 1: Creation

- January 01, 2019
Happy New Year!  What better way to start the year than by diving into the beginning of God's Word - the start of our story?  With the story of creation, God begins to share His nature and methods with us.  Each step in the process makes sense as He creates order from nothingness.  To Him, time means nothing (it's merely a piece of creation itself) but thinking is everything.  Let's start our journey! Our Story With God: Episode 1
1 comment
Read more
More posts