Geography of War - The Battle of Teutoburg Forest

- July 11, 2022
The Battle of Teutoburg Forest
Date:
September, 9 (AD)
Modern Location:
Northwest Germany
Combatants:
Roman legions (led by Publius Quinctilius Varus) vs. Germanic tribes (led by Arminius)
Summary:
In 55 BC, Julius Caesar built bridges across the Rhine River to engage Germanic tribes on their own soil.  The northern extent of Rome was expanding, and the area that currently encompasses northern Germany was a formidable but enticing target.  Pushing the boundary if their frontier from the Rhine to the Elbe took 60 years of fighting, but by 7 BC the tribes in the area were largely pacified and Romans were more involved in colonizing than conquering.  Part of the strategy employed while subduing enemies included taking young hostages back to Rome for education and military training, then returning them to their native regions to communicate and negotiate with the peoples near their homes.  One such hostage was named Arminius, the son of the chief of the Cherusci tribe.  By the time he returned to his homeland, Arminius had been granted Roman citizenship and had earned his own command.  The Roman leaders in Germania believed that the tribes were under their control and that Arminius was a loyal commander that would help establish allies or contain rebellion.  They were wrong on both assumptions.  When eight of the 11 legions in Germania were called away to quell an uprising far to the east in the Balkans, a plot to defeat the Romans was hatched. 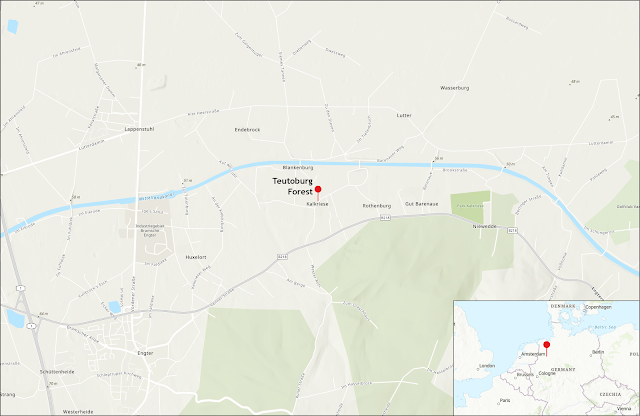 Serving in a role that allowed him to take messages between local tribes, Arminius secretly began to establish a network of support.  When preparations had been arranged he leaked information to the commander of the three remaining Roman legions, Publius Quinctilius Varus, that a rebellion had begun that required a strong military response.  The Roman legate was known to have a better administrative than military mind, which made sense if his exclusive purpose was to convert the local population into a Romanized, tax-paying colony.  Arminius had other plans, however, and requested permission to leave Varus to round up support from allied tribes.  The Romans relied on local guides as they marched into the unknown region to their northwest, and soon found their ranks stretched thinly along several miles of forest between hilly terrain and a bog.  At that point the guides vanished into the pouring rain, and Arminius suddenly reappeared alongside an army of Germans from numerous tribes.  Over a period of four days, the Romans attempted to fight off their attackers and escape their desperate situation, but the preparation, intelligence, tactics, and numbers of the native force was too great to overcome.  Several groups tried to escape to call for reinforcements, but each attempted was intercepted and cut down.  After being trapped by an earthen roadblock the majority of Roman officers committed suicide, including Varus, the remaining legionnaires made a final, desperate, and ultimately unsuccessful attempt to break through to safety.  Nearly every Roman was killed or captured, and even those who were taken alive were either tortured or enslaved.  The Germanic tribes had achieved a complete victory over the most vaunted military force in the world.
A view of the likely battlefield, stretched between wooded hills to the south and marshland to the north: Geography:
Roman forces were experienced and battle-tested, but were more accustomed to fighting in open fields.  Arminius knew all of the legion's tactics and, recognizing the importance of the area's geography as a tool to eliminate his opponents' advantage, launched isolated guerilla attacks within the wooded portions of the trail against small segments of the Roman line until they had taken enough damage to allow for a full assault.  The hilly terrain, thick forest, and nearby boggy marsh would have been difficult enough to handle, but torrential rains further exacerbated the Roman situation.  As the tribes attacked from the high ground they also controlled the flanks, ensuring any attempt at retreat or escape would be fruitless.  The legions lacked  sufficient intelligence on the region and had strayed too far from any support.  Finally, Arminius was also able to artificially increase his advantage by building trenches and walls to block the path even before the Romans walked into his trap.
Result:
The three legions in Germania were gone, and the local tribes proceeded to wipe away all of the Roman fortifications and encampments east of the Rhine River.  This fundamentally affected the course of European history by blocking Roman expansion into the Germanic regions and beyond.  When word of the defeat reached Caesar Augustus, he went into mourning and was so shaken that he decided it was necessary to make preparations to defend Rome against either internal insurrection or revolt by various outlying regions.  He is said to have bashed his head against doors and walls at various times, wailing to the deceased Varus to return his legions.  The Rhine became the boundary of Roman rule for centuries, and Germania was forever seen thereafter as an enemy territory rather than as a target for expansion.  Even when Germanicus, a Roman commander, led a punitive campaign through the same region seven years later the purpose was to eliminate the threat that Arminius posed rather than to recover lost territory.  It is believed that many of the same tribes who were involved in Teutoburg Forest would participate in the assault on Rome that would result in the destruction of the Western Empire nearly 500 years later.