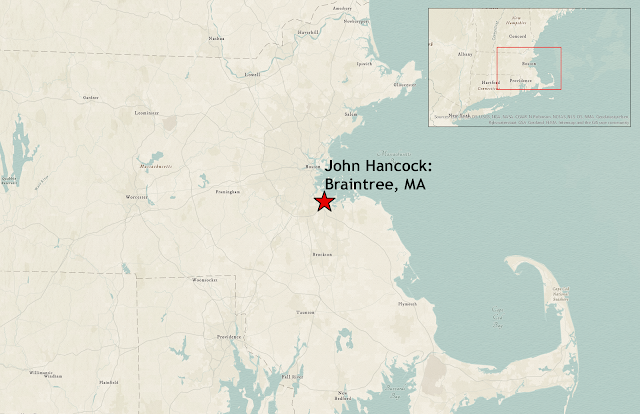 For several weeks we've learned more about some of the signers who do not have a significant measure of modern notoriety.  Today, however, I want to study a man who seemingly everyone has heard of.  The name "John Hancock" has become synonymous with signatures in the United States, due to the bombastic style of his writing at the bottom of the Declaration of Independence, but his story his somewhat less known despite the several important roles he played.  Like Samuel Adams, whose life we explored at the beginning of our journey through the biographies of America's Founding Fathers, John Hancock was born in the city of Braintree, MA, although the exact address is now within the modern city of Quincy.  His parents were a minister named John and his previously-widowed wife Mary, but they did not guide his life nearly as much as his uncle and aunt, Thomas and Lydia Hancock, who took him in at the age of 7 when the elder John died.  Thomas lived in nearby Boston, and was one of the city's riches residents due to a very successful importing business known as the House of Hancock.  Young John was brought up in this luxurious setting, attending Boston Latin School before studying at Harvard College.  At just 17 years of age he graduated and entered the marketplace as a merchant, and after apprenticing with his uncle he was sent on a business trip to England, during which he experienced King George III's coronation.  Upon his return John continued to assume additional responsibilities for the family business as his uncle's health declined, becoming a partner at the age of 26 before inheriting the firm upon Thomas' death the following year.

In addition to his affluence (or perhaps due to it), John Hancock was both socially and politically well-connected.  He won his first election as a selectman in 1765 and a year later joined the Massachusetts legislature at a time when the colonies were struggling against the Stamp Act.  Hancock soon found himself directly at odds with the British when his ship, the Liberty, was seized for smuggling by officials who claimed he had illegally unloaded cargo of wine without paying mandatory taxes.  Although initially a moderate who opposed Britain's actions but believed the colonists should have to abide by them, events such as these led Hancock to actively support Boston's fiery patriots in the cause of independence.  Guided by Samuel Adams, Hancock's influence over colonial matters continued to grow as he led a committee that successfully demanded the removal of British troops after the Boston Massacre in 1770.  Although not actively involved in the Boston Tea Party, he was in favor of active opposition to Britain's efforts to tax the colonies.  Late in 1774, after British General Thomas Gage arrived with troops to take over Boston's port and assume the role as governor, the "Cradle of Liberty" formed the Massachusetts Provincial Government and named John Hancock the president.  As this body declared itself separate from British control, it was deemed treasonous and both Hancock and Adams were sought by General Gage.  After the pair had attended a session in Concord, they chose to remain at a Hancock family house in Lexington rather than risk a return to Boston.  British troops sent to arrest them encountered the Minutemen militia, leading to the first skirmish of the American Revolution.

Colonial delegates to the Second Continental Congress arrived in Philadelphia soon thereafter, and John Hancock was unanimously elected president in 1775 to replace Peyton Randolph.  He led the body during many of its most important proceedings, culminating in the ratification and signing of the Declaration of Independence.  Although he was passed over as commander-in-chief of the Continental Army in favor of George Washington, Hancock consistently used his wealth to support the revolution.  He resigned in 1777 after a falling out with former mentor Samuel Adams and had a brief military command that was not noteworthy, but soon returned home to Massachusetts to help write their state constitution.  He was elected as the first governor in 1780, and held that office for all but four years from then until 1793.  Significant economic issues that plagued much of America after the revolution caused problems for Massachusetts, leading to unrest and dissent during Hancock's time in office.  Health concerns and increasing political upheaval caused him to resign his position as governor in 1785, at which point he was elected to the national Congress under the Articles of Confederation.  The assembly had very little power and although Hancock was selected as president he never attended and instead sent a letter of resignation in 1786.  While he was away from the governor's office, an armed conflict known as Shay's Rebellion broke out to oppose actions taken by Governor James Bowdoin, Hancock's primary political opponent at that time, that had economically crippled farmers throughout Massachusetts.  With Bowdoin's popularity rapidly diminished, Hancock was re-elected as governor in 1787 and he sympathetically pardoned the rebels.  Despite concerns about centralizing power at the national level, Hancock joined Adams to support ratification of the new Constitution in 1788.  While still serving as governor John Hancock's health finally deteriorated and he died in 1793.  He received a lavish funeral and Massachusetts declared the day a state holiday.  He was buried at Boston's Granary Burial Ground, one of many historical locations in the city that John Hancock influenced.  To read more about any of these locations, please consider reading some of the posts I wrote about Boston a few years ago - https://www.geographist.com/p/boston.html

The signature of John Hancock can be found as the first and largest name centered beneath the Declaration of Independence.