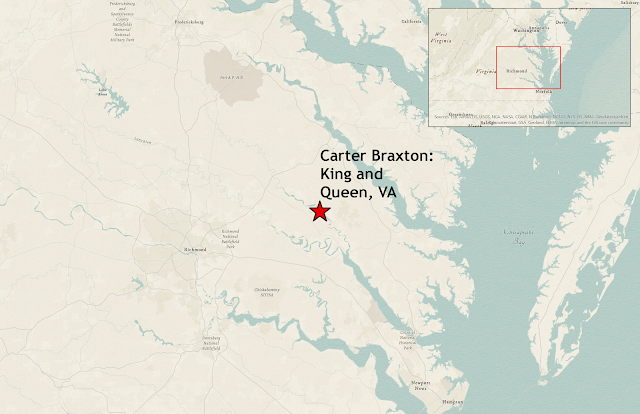 This week we'll take a sharp departure from the life of John Adams, a well-known patriot who enjoyed success and fame after the American Revolution, and focus on a lesser-known signer named Carter Braxton whose story could hardly be more different.  The second son of George Braxton and his wife, Mary, the young child was surrounded by wealth and elite societal position from birth.  While his father had parlayed land grants into success as a planter, it was his maternal grandfather that had gained nearly-unparalleled wealth as a merchant.  Robert Carter, who had earned the nickname "King" from his fellow Virginians, was one of the richest residents and land owners in the American colonies.  But while Braxton was not lacking for money he was no stranger to loss.  His mother died immediately after he was born and his father only survived until he was 13 years old.  As an orphan he followed a family tradition by attending the same school as his father and brother, the College of William and Mary, and then also followed in his father's footsteps by marrying a wealthy wife.  His bride, Judith Robinson, happened to be the niece of family friend named John Robinson, a powerful politician who had been elected with and served alongside Braxton's father before becoming the Speaker of Virginia's House of Burgesses.  Tragedy struck again just two years later, however, as Judith died while giving birth to the couple's second child.

By the age of 21, Carter Braxton had dropped out of college and was the widowed father of two young daughters.  After spending two years in England, he returned home to Virginia in 1760 and sold the property where he had previously lived.  He married again shortly before his 24th birthday to Elizabeth Corbin, the daughter of a successful government official, and purchased land for a new home as well as a schooner that allowed him to launch his own trade enterprise.  The couple were considered quite wealthy and had a comparatively magnificent lifestyle, and they would eventually have a total of 16 children, 10 of whom survived infancy.  Braxton's political career began soon thereafter in 1761 with a position in the House of Burgesses, where he was an ally of John Robinson who was serving as both the speaker and treasurer.  Upon the death of his older brother, George Braxton Jr., Carter inherited the remainder of his family's estate but was forced to sell much of it to support his lavish lifestyle.  When John Robinson died in 1766 a scandal erupted when it was discovered that many of his political allies, including the Braxton family, had been given lucrative loans of paper money that was supposed to have been removed from circulation and destroyed.  This event not only earned Braxton embarrassment and a legal order to pay debts immediately, but also began a long-standing feud with Richard Henry Lee when the latter used the scandal to bolster his own political pursuits.

Carter Braxton was not philosophically dedicated to the principle of American freedom from Britain, although he supported Patrick Henry's 1765 resolution opposing the Stamp Act and later argued that Virginia should have the sole right to tax their own residents.  In 1775 he successfully diffused a potentially dangerous situation when the colonial governor seized gunpowder owned by Virginia and had it loaded onto a British ship.  Patrick Henry called the militia to arms and insisted on being repaid for the value of the powder, or else he threatened to inflict comparable damage on British interests.  Braxton confronted Henry, secured funds from his father-in-law that satisfied the colonials, and averted violence.  While he was not initially elected as a delegate to the Continental Congress, he was appointed to replace Peyton Randolph upon his death.  Reaching Philadelphia in February, 1776, he spoke out against a premature break from England and released a pamphlet named Address to the Convention to oppose the democratic arguments put forth by John Adams.  While it is unknown which way Braxton ultimately voted he was one of seven Virginians to eventually sign the Declaration of Independence.

Whatever his views were before the American Revolution began, Carter Braxton was a significant supporter of the war effort once his name had been attached to the treasonous document.  The Virginia delegation was reduced to just five members in August, 1776, at which point he and fellow moderate Benjamin Harrison returned home.  His family's home on the Chericoke Plantation burned during the winter of 1776 but Braxton was unable to rebuild as he was quickly sent back to the House of Burgesses where he served for the bulk of his remaining years.  Personally contributing significant amounts of money to the cause in the forms of loans and boats, he was involved in shipping and privateering for a period of time until the majority of his vessels were destroyed or captured by the British, costing him much of his personal fortune even while British troops targeted his plantations for destruction.  The money he had loaned became worthless as currency was devalued, and Braxton was forced to sell much of his significant land holdings and move to a simple home in Richmond, where he became mired in debt, poor business decisions, and many lawsuits.  Never recovering financially, he sought a regular income from a paid position on the Council of State while Patrick Henry was governor.  On October 10, 1797, Carter Braxton suffered a fatal stroke, and while it was long believed that he was buried at Chericoke his grave was never found when the family burial site was relocated to Richmond in 1910.  Today a marker bearing his name stands alongside those of his loved ones, but the final resting place of the man who lost nearly all of his material goods supporting the birth of America may never be known.

The signature of Carter Braxton can be found as the final name on the third column beneath the Declaration of Independence.