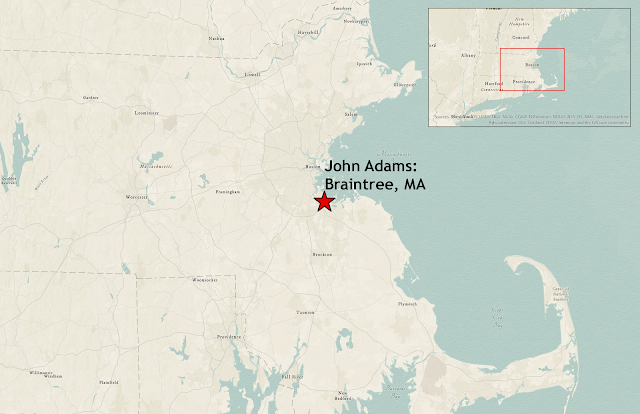 We are starting our study of the Founding Fathers who signed the Declaration of Independence with one of the most famous and influential men in American history.  Able to trace his ancestors to the original Puritan immigrants that reached the shores of Massachusetts, John Adams was the oldest son born to John Adams, Sr. and his wife, Susanna.  Although John Sr. held both church and political positions besides working as a farmer and cobbler, serving as a deacon as well as local councilman, he wanted his son to enter the ministry.  After receiving a scholarship and graduating from Harvard University at the age of 20, however, John the younger opted for a career in law.  In 1758, after three years of teaching and completing a Master's degree, John joined the bar and returned home to Braintree.

His personal and political life began to change dramatically with his marriage to Abigail Smith in 1764 and the passage of the Stamp Act the following year.  John and Abigail were both very opinionated and independent personalities who spoke out against British taxation even as their family grew with the birth of their first child, a daughter.  Adams wrote "A Dissertation on Canon and Feudal Law" that argued for the moral right of protest against Britain, and by the time the Townshend Acts were passed in 1767 he was among the most combative leaders against the actions by the Crown that were viewed by many colonists as being punitive overreach.  By then the father of four children, he risked public ridicule in 1770 by representing British soldiers involved in the bloody incident which became known as the Boston Massacre.  Although it was an unpopular position to insist upon the rights of the soldiers, it nevertheless bolstered the opinion that Adams was a just and principled man.

John Adams was chosen to represent Massachusetts at the First Continental Congress in 1774 and quickly asserted that Britain not only lacked the right to tax the American colonies, but could not even govern them.  The following year, during the Second Continental Congress, it was Adams who nominated George Washington to lead the Continental Army.  As one of the leading proponents for independence, he was selected as one of five men to help wrote the Declaration of Independence, which was completed and adopted in just three days.  Immediately thereafter, John turned his focus to international affairs, specifically a treaty and alliance with France that would shape the young nation's foreign policy.  He left America in 1779 to join Benjamin Franklin during the negotiations leading up to the Treaty of Paris, which ended the Revolution and insured international recognition of the new nation, and remained in Europe for nearly a decade while representing his country as a diplomat and minister in France, Britain, and the Netherlands alongside such luminaries as Franklin and Jefferson.

Returning to the United States in 1788, John Adams had been absent for nearly the entire lifespan of the Articles of Confederation, but he was immediately placed on the very first presidential ballot under the new Constitution.  As expected, George Washington was the overwhelming choice during each of the first two election cycles, and he received all 69 available votes from the Electoral College in 1788-89 as well as all 132 available votes in 1792.  Adams was chosen as the nation's first Vice President each time, receiving 34 and 77 votes, respectively.  The lack of constitutional clarity about the responsibilities of the office, however, left the fiery Adams frustrated due to his lack of influence.  He cast more tie-breaking votes as the president of the Senate than any future vice president, and consistently supported the president's position on major issues.  When George Washington chose not to seek a third term and retired to his home in Mount Vernon, John Adams narrowly defeated Thomas Jefferson in the election of 1796 with a final electoral vote of 71-68.  Jefferson did not support the presidential administration as Adams had, and bitterly divisive partisan politics emerged at the highest level of government as the former friends became rivals.

At odds with Jefferson's Democratic-Republicans as well as other Federalists led by Alexander Hamilton, John Adams struggled to make his mark on the office vacated by the country's greatest leader.  Unpopular for foreign policy decisions such avoiding war with the French Republic after the latter started pirating along the Atlantic coast, the president ruined any hopes of re-election by signing the Alien and Sedition Acts which was seen as an attempt to legally crush political opposition.  Jefferson won an electoral margin of 73-65 during the election of 1800, and by the time he was sworn into office as the nation's third president the now-retired Adams was already well on his way back to Massachusetts.  During his remaining life he wrote his memoirs and had correspondence with many political leaders, including his son John Quincy Adams who became president in 1825.  He eventually reconciled with Thomas Jefferson in 1812, beginning a lengthy series of letters between the two men that is among the most impressive and valuable historic records regarding the birth of the American nation.  On July 4, 1826, John Adams lay dying at the farm in his home town that had been renamed in honor of his son (Quincy), and on the 50th anniversary of the signing of the Declaration of Independence he uttered his final words: "Thomas Jefferson survives".  He was wrong, however, as his erstwhile foe had passed away only a few hours before.  The two great patriotic titans whose lives were so entwined throughout their lives were poetically linked in death, and the age of America's Founding Fathers effectively ended.

The signature of John Adams can be found as the fourth name on the sixth (farthest right) column beneath the Declaration of Independence.