Geography of War - The Landing at Cape Helles

- September 12, 2022
The Landing at Cape Helles (World War I)
Date:
April 25-26, 1915
Modern Location:
Northwest Turkey
Combatants:
Allied forces (led by Major General Aylmer Hunter-Weston) vs Ottoman Empire forces (led by Colonel Halil Sami Bey)
Summary:
The Ottoman Empire at the beginning of the 20th century was a mere shadow of the world power that it had once been.  After years of decline under the rule of various sultans, an uprising by a group of intellectuals and military leaders calling themselves the Young Turks had taken control in an attempt to create a new political and social reality for the nation.  In an era that saw the rise of entangled international alliances there were few countries who did not have treaties that promised support in the event of war.  The Ottoman Empire was geographically situated at an internationally critical location, as they controlled the only point of access to the Black Sea - a skinny strait of water between Europe and Asia known as the Dardanelles.  Ministers from nations such as England, France, and Germany all travelled to Istanbul to seek support, or at least promises of neutrality in exchange for significant financial compensation.  During the summer of 1914, as the initial escalations of World War I were taking place, the Ottomans began to increasingly favor the German advances and agreed to an alliance that called for expanded anti-Russia actions in exchange for territorial gains.  In September, the Ottoman Empire decided to shut down shipping activity through the Dardanelles, effectively blocking Russia from access to the Mediterranean at a time when the German fleet had blocked access from Russia's Baltic ports to the northern Atlantic.  By November, Britain and France declared war against the Ottoman Empire, who had formally sided with the Central powers and would soon also declare holy war against Russia to reclaim lost territories.  When Russia requested help distracting the Ottomans from their activities in the Caucasus region to the east of the Black Sea, the British decided to employ a strategy to send warships through the Dardanelles to attack Istanbul.  Troops from across the British Empire were sent to invade the peninsula along the European side, known as Gallipoli, in an effort to eliminate the well-entrenched defenses guarding the passage. 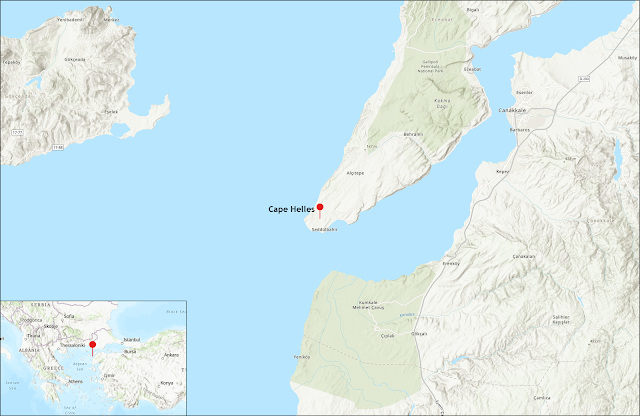 Britain's First Lord of the Admiralty, Winston Churchill, approved of a plan to send a group of older ships to the area since they were of little use against the modern German fleet.  The strategy was to send a landing force onto Gallipoli to defeat the existing fortifications and push the Ottoman forces out, which would then also give Allied forces the high ground to push back defenses along the Asian side of the strait.  Five beaches were selected as landing sites and given letter designations, including two on either side of the southernmost cape that were nicknamed V and W.  These two beaches would witness the fiercest fighting and the heaviest casualties, while landings at the S beach to the east and the X and Y beaches along the west were initially met with only light resistance.  The initial landing force approached W beach before sunrise and encountered a stretch of sand heavily defended by mines, barbed wire, and machine guns which had been hidden along the sides that covered the entire area in a crossfire.  Many soldiers never even made it to dry land, as small arms fire from the beach led them to leap into deep water where they sank under the weight of their gear.  It took more than three hours before Allied forces were able to push far enough inland to uproot the Ottomans from their positions overlooking the landing zone.  The situation for those attacking V beach was just as bad, as defensive positions had been set up in a castle and a fort on either side of the landing area.  Forces that had taken S, X, and Y beaches had inaccurate maps, faulty intelligence, and poor communication, and therefore did little to either relieve the more heavily-defended beaches or gain control of inland areas prior to Ottoman reinforcements arriving the next day.  Despite outnumbering their defenders by as much as 6:1 the British sustained significant losses and struggled for two months to accomplish the goals set for the first day of the invasion.
A view of Gallipoli from the southwest, showing the Dardanelles leading to Istanbul at the entrance to the Black Sea farther north: 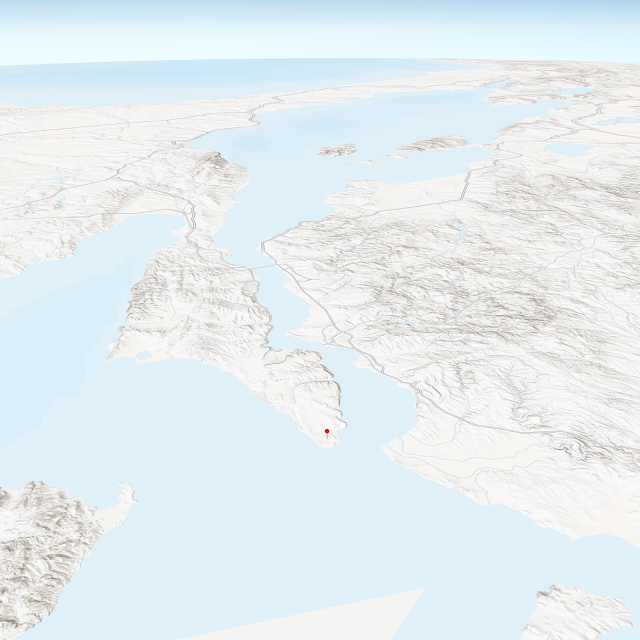 Geography:
The battle for Gallipoli was only fought because of its strategic location, but there were many geographic factors that came into play.  Russia's inability to move their naval forces in or out of the Black Sea was coupled with their military's struggles against the attacking troops to the east, and therefore they needed their allies to open up a second front against the Ottoman Empire.  British military support for the amphibious assault on Gallipoli was guided by faulty intelligence about the strength of defending forces, but it was exacerbated by the terrain that troops encountered.  Steep cliffs and narrow, twisted gullies bordered the beaches, which provided cover for the outnumbered defenders and caused the British forces to become disoriented and separated as they struggled with incorrect maps.  The current of the water exiting the Dardanelles and the proximity to the Asian side of the strait combined to hamper landing efforts on at least two of the beaches, as several boats were either delayed or entirely unable to navigate their way to their designated locations.
Result:
The entire Gallipoli campaign is generally viewed as a failure for British forces, and the landing at Cape Helles represents a microcosm of the shortcomings and challenges they experienced.  In some ways, it served as a final proud moment for the crumbling Ottoman Empire and it is now celebrated by the citizens of Turkey as a defining point for their national identity.  Interestingly, the battles fought by troops from New Zealand and Australia are still commemorated by those nations today, marking the beginning of a sense of national pride for both as it represented the first time either had participated in a military engagement during World War I.  Casualties on both sides approached 2,000 for the landing, with the entire campaign costing both the Allied and Ottoman forces over 100,000 deaths in all and a total casualty count in excess of half a million.  Militarily, if the Allied purpose of the invasion was to divert Ottoman troops away from their eastern front against Russia then it may be considered some manner of victory, although the cost was especially high.  Politically, it caused significant upheaval in Great Britain as Prime Minister H. H. Asquith first had to recreate his coalition government, and then eventually resign his position and make way for David Lloyd George's election as Prime Minister.  Winston Churchill was demoted from his position, and he then also resigned and took a battlefield position commanding an infantry battalion.  His later rise to Prime Minister and participation in the planning of World War II's D-Day invasion is especially intriguing in the light of the Gallipoli disaster.  Allied troops evacuated early in 1916, although the Middle Eastern theatre of WWI continued until the Ottoman Empire's ultimate defeat in 1918.