Geography of War - The Battle of Milvian Bridge

- September 05, 2022
The Battle of Milvian Bridge (Roman Civil War of the Tetrarchy)
Date:
October 28, 312
Modern Location:
Rome, Italy
Combatants:
Roman legions loyal to Emperor Constantine vs Roman legions loyal to Emperor Maxentius
Summary:
The politics of the Roman world in the fourth century AD were complicated.  In an effort to quell the wars of succession that had ravaged the empire for many years, Emperor Diocletian developed a system known as the Tetrarchy in 293 that provided for two emperors, equal in power and both holding the title of augustus, to control the eastern and western halves of Rome.  Both had a designated successor that ruled alongside them, each being referred to as a caesar.  Diocletian had previously groomed his own caesar, named Maximian, before elevating him to co-augustus and ruler of the western half of the Roman empire in 286.  To help with affairs in the eastern half, Diocletian named Galerius as his new caesar, while Maximian chose Constantius.  The two emperors chose to transfer their power after 20 years by stepping down in 305, and their chosen successors ascended without bloodshed.  It would be the last time the Tetrarchy system worked smoothly, as the offspring of former emperors began challenging the named successors for the right to rule.  By the year 311 Maxentius, the son of Maximian, had wrested control of Italy from the chosen successor, Severus, and after having his rival murdered had named himself the new augustus with the support of the Senate and the Praetorian Guard.  Initially, his brother-in-law and fellow imperial offspring Constantine supported him while the rulers of the eastern half labeled him a usurper.  Eventually, however, the power vacuum in the East caused by the death of Galarius combined with his own ambition to control the west lured Constantine to invade Italy with the intent to displace Maxentius as sole ruler of the West.  Rather than take advantage of his numeric and defensive advantages by securing himself within Rome, Maxentius set out to face Constantine's invasion in open battle.  Seeking good fortune by engaging in battle on the anniversary of his own ascension, Maxentius crossed the Tiber River and awaited an attack. Two key events took place before the battle began.  First, the Milvian Bridge was cut by defending forces and temporarily replaced by a pontoon bridge made of boats.  This made a more imposing barrier against Constantine's forces but also made retreat a much more difficult endeavor to execute.  Second, it was reported that Constantine saw a vision of a Christian symbol in the sky that led him to believe that he would be assured victory if he painted a cross on the shields of his army.  At the time, Christians were not generally accepted by Roman leaders and were frequently persecuted.  Whether because of the superstition of Maxentius or divine help for Constantine, the battle's result did not take much time to be determined.  As the defenders took their position along the river, Constantine ordered his cavalry into the fight and quickly broke the line.  Maxentius and his men began a frantic attempt to return across the Tiber on the temporary floating bridge, perhaps hoping to regroup and stage a defense from the city itself, but at some point it either broke or was destroyed.  Many soldiers, including Maxentius, were drowned in the river while those that remained along the north bank were forced to surrender or fight to the death.  Constantine's forces won a convincing battle and carried the head of their defeated rival into Rome the next day.  With no remaining challengers for control over the West, Constantine became the undisputed ruler.
A view towards Rome from the northern side of the Tiber River: 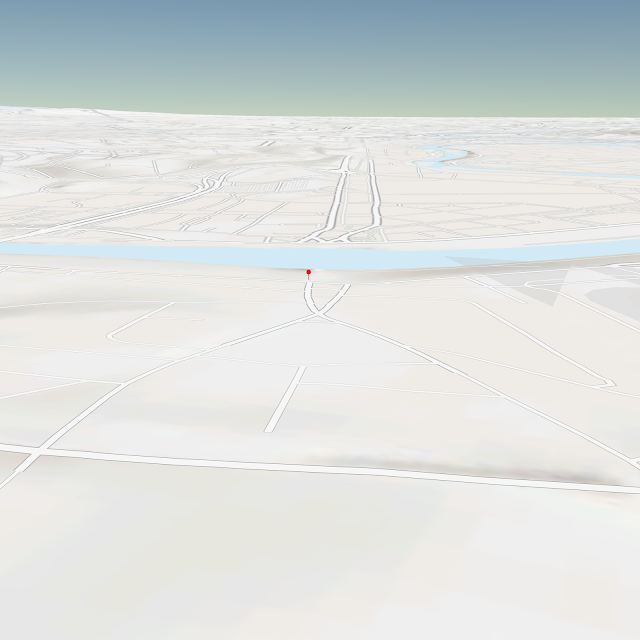 Geography:
The Milvian Bridge was a vital river crossing just outside of Rome.  Once destroyed, it made the Tiber River an imposing barrier for any army attempting to invade the city.  The decision by Maxentius to fight along the northern side of the river was questionable, and ended up being disastrous.  But the river played another critical role during the fight.  By forming his battle lines so close to the river's bank, Maxentius limited his own army's ability to maneuver and reinforce weak points.  When Constantine's cavalry breached the lines, it became nearly impossible for any defensive strategy to be employed.  A significant number of soldiers were pushed back into the water, which was too deep to ford after the final crossing option was destroyed.  The weight of Roman armor and weapons forced many of the soldiers into a watery grave.
Result:
Constantine became the Emperor of the West, with no other claimants having survived the conflict.  He claimed to believe that the Christian God had blessed him with victory, and while it is uncertain whether he actually became a Christian himself at that point it is obvious that he became a proponent of that faith.  In 313 he issued the Edict of Milan, effectively legalizing Christianity and allowing for the conversion of pagan worship sites into churches, a move that had a massive impact on the religious future of the majority of Europe.  Politically, Constantine continued to expand his influence and within a decade he conquered the leader of the East, Licinius, to finally dissolve the Tetrarchy.  As the head of the newly-unified empire he decided to relocate his capital to a new city in 324, renaming Byzantium to Constantinople, and although Rome fell in 476 AD the eastern Byzantine Empire existed in various forms until it finally collapsed in 1453.