Geography of War - The Battle of Vittorio Veneto

- June 26, 2022
I am currently visiting Italy and in recognition of that fact I thought it might be interesting to look at an important moment in Italian military history.  It comes from a war that receives fairly little mention in American textbooks, but is a battle of great importance to European history.  I hope you enjoy and learn something new, as I have!
The Battle of Vittorio Veneto (First World War)
Date:
October - November 1918
Modern Location:
Northeastern Italy

Summary:
The two major armies fighting in the Italian theater of WWI had exchanged devastating victories over one another during the previous 12 months, with Austria-Hungary inflicting 300,000 casualties on the Italians at the Battle of Caporetto in November 1917, followed by Italy's successful defense in the Battle of Piave River in June 1918 that cost the invading army 118,000 casualties.  Combined with losses in other geographic areas and general political upheaval, the morale on the Austro-Hungarian side of the fight was virtually non-existent.  For a while, the Italians had been forced to remain defensive until their army was rebuilt, but in the waning months of 1918 General Diaz believed his forces were virtually assured of success.  His offensive movement was designed to have several infantry divisions storm their way across the imposing Piave River, and then advance to the city of Vittorio in the region of Veneto.  A successful result would cause the splitting of the Austro-Hungarian forces that had invaded Italy, virtually assuring they would struggle to pose any serious threat for much longer.  Holding an advantage in artillery and a near-total dominance of the skies above the battlefield, Diaz ordered his attack on October 23. Under cover of darkness, several boats ferried British and Italian soldiers across the flooded Piave towards a large island in the river named Grave di Papadopoli, where they stealthily attacked the Austro-Hungarians there with bayonets until the alarm sounded.  By the end of the night, the island had been taken.  Early the next morning, on the first anniversary of the Battle of Caporetto, the Italians assaulted a high peak to the north called Monte Grappa in an effort to secure the high ground and draw reserve forces away from the river.  Progress on the mountain was slow and difficult, with the Austro-Hungarians clinging to the ground they had long held in the face of constant artillery bombardment.  The Allied advance across the Piave, however, effectively turned the tide as Italian and British forces began to push so deeply into enemy territory that they nearly became overextended.  Reinforcements, including French and American reserves, came pouring across the river to protect the newly-gained territory.  In addition to military developments, the Austro-Hungarian Empire began to fracture during the course of the battle, with Czechs and Slavs declaring independence from the union as the Allies pressed their advantage in Italy.  By the end of October, Vittorio Veneto had been taken and the forces attacking Monte Grappa were finally able to push past the defenders' line.  Almost simultaneously, Hungary withdrew from their union with Austria on October 31, ending the empire.  The military ordered a general retreat, and the Allies continued to press forward until an armistice was arranged, which happened on November 3.  The Italian theater of World War I was officially ended, and the final armistice to end the war occurred just over a week later on November 11, 1918.
A view from Vittorio Veneto towards the Piave River, with Monte Grappa to the right: 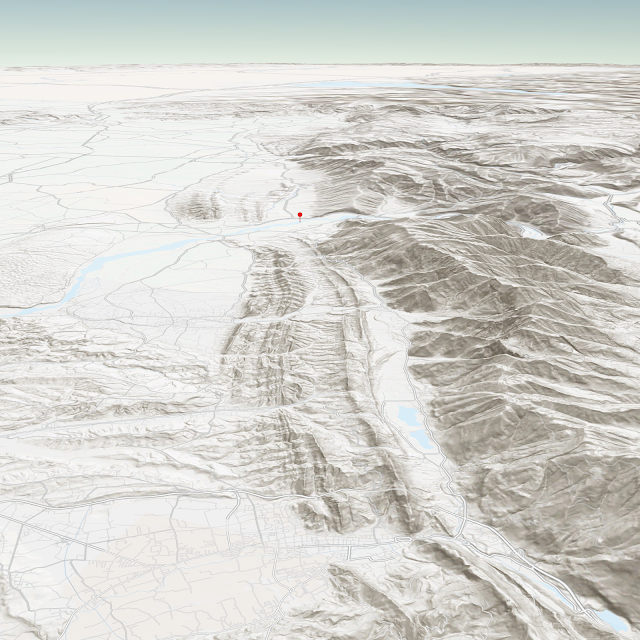 Geography:
The battle was fought across a wide front, with Allied forces stretched some 35 miles across.  The two most important geographic features during the battle were the rivers and mountains.  The flooded Piave River posed a challenge to any attacking army, giving the defenders a perceived advantage as attackers may have been just as terrified of dying in the cold rapids as they were of facing bullets and artillery.  Even after advancing beyond the river, it became necessary to establish communication lines across the river.  Italian engineers handled the initial ferrying of troops across the Piave, and a team of elite commandos known as the Arditi Corps handled duties of swimming messages across the river.  This hand-picked unit of the 82 best-trained soldiers in Italy suffered a loss of 50 soldiers in the Piave, a mortality rate of 61%.  High above the river, however, the majority of Allied losses were sustained during the assault on Monte Grappa - including over 24,000 of the 37,000 Italian casualties.  And while the city of Vittorio Veneto was reached and successfully taken in just five days, it took 10 to finally unseat the Austro-Hungarians from their mountain position.  By the end of the battle, however, Gen. Diaz's tactic of dividing his opponent's forces worked, and the Allies were able to successfully take the majority of the northern troops in surrender as they were cut off from retreat or reinforcements.
Result:
The Battle of Vittorio Veneto was a complete victory for the Italian-led Allied armies and helped change the map and history of Europe forever.  With no more functional army remaining, the Austro-Hungarian Empire fractured and dissolved into numerous smaller states.  Italy's victory gave them much more favorable terms in the armistice that ended the war, allowing them to retain territory that had previously been lost to invaders.  The total victory that the Allied forces achieved in southern Europe would impact how the post-war map was redrawn, which itself would impact European politics through World War II and into the 21st century.