Geography of War - The Battle of Stirling Bridge

The Battle of Stirling Bridge (Wars of Scottish Independence)

Date:
September 11, 1297
Modern Location:
Central Scotland, United Kingdom
Combatants:
Scotland (led by William Wallace and Andrew Moray) vs. England (led by John de Warenne, Earl of Surrey and Hugh de Cressingham)
Summary:
In September of 1290, the only living heir to Scotland's recently deceased King Alexander III (a granddaughter named Margaret) died before being crowned.  When the lengthy dispute over succession threatened to escalate into civil war, the nobles invited King Edward I of England to act as an impartial mediator.  Seeing an opportunity, Edward first appointed a weak king of Scotland, John Balliol, that he believed he could control.  Just four years later Edward deposed King John when the latter signed a treaty with France, and subsequently claimed lordship over Scotland in 1296, leading to significant turmoil and rebellion against English rule throughout the country.  The largest concentrated force was created when a small army led by Andrew Moray, an esquire from the Highlands, was joined by men under the command of William Wallace.  Together they marched to the River Forth, where they waited on a hill just across a skinny bridge from Stirling Castle - the former Scottish royal residence.  The spot was symbolically and strategically important, as it was seen as the gateway to Scotland and was the only protected location to cross into the northern country.  To the east the River Forth widened significantly into a bay that would require boats to cross, and to the west the land became too marshy for effective troop movements.  English troops outnumbered their Scottish counterparts, and as long as they remained in the heavily fortified castle they were in no danger of being attacked.  But Edward's intent was to crush resistance to his rule, and therefore crossing the river was required to invade the north. In 1297, the bridge crossing the River Forth was some 300' long but only wide enough for two people to cross at a time.  The English had only a minor advantage in the number of foot soldiers, but their cavalry outnumbered the mounted Scottish force by approximately 2,000 - 300.  One knight proposed an attempt to outflank the Scots by taking a force two miles upstream to the nearest crossing that could support horses, but Hugh de Cressingham (the king's treasurer) convinced the commanding Earl of Surrey that such a move would be expensive and unnecessary.  On the morning of September 11, the English began to cross Stirling Bridge slowly, with Wallace and Moray watching from atop Abbey Craig to the northeast.  After waiting until a significant portion of English had crossed, the Scottish force swept down across the soft, flat ground between them and the river.  The quickly secured the east side of the bridge, cutting off their opponents from any path of retreat or hope of reinforcements.  At some point during the battle the bridge itself collapsed.  Although Moray was mortally wounded, the English suffered a stunning defeat that cost the lives of over half of their force.  Wallace was left as the undisputed leader of the most successful Scottish resistance to King Edward I, and was elevated to the position of Guardian of the Kingdom of Scotland.
View of the River Forth and battlefield from Stirling Castle's perch atop Castle Hill: 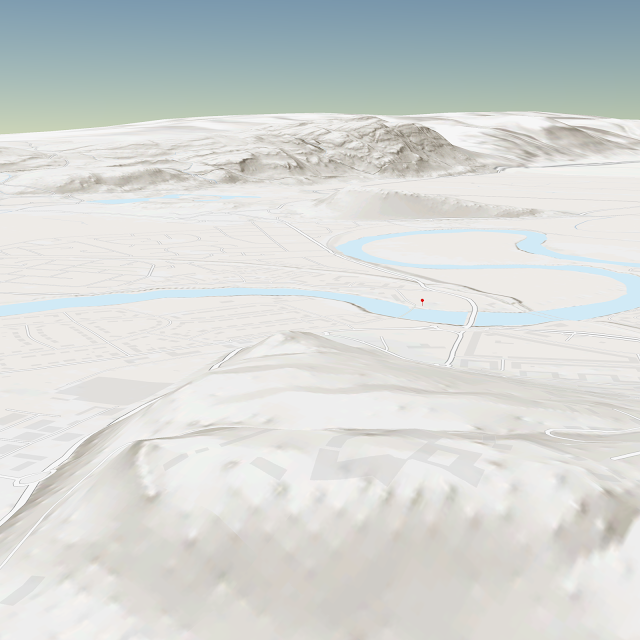 Geography:
In addition to the tactical problems created by a narrow bridge, the English also had to contend with the soggy banks on the Scottish side of the river.  The advantage typically associated with cavalry was negated as the horses were unable to maneuver effectively in the mud.  The bend of the River Forth completed the trap, as most armored soldiers were unable to swim to safety.  The Scottish soldiers remained patient as they held the high ground to the north, while the English were unwilling to travel west to establish a foothold that would allow them to outflank their opponents.
Result:
The victory of the Scottish forces under William Wallace slowed the English advance.  While Wallace himself would eventually be captured and executed by Edward eight years later, the war would continue until 1328 when Robert the Bruce successfully defeated the English (including a key victory at Bannockburn, just a few miles south of Stirling, in 1314) and secured a treaty with Edward III that officially recognized Scottish independence.