Geography of War - The Battle of Cowpens

Summary:
The Southern Continental army, having recently come under the command of General Nathanael Greene, was desperately in need of being rebuilt in 1781.  British forces had taken the major cities of Charles Town and Camden, and consequently expected little resistance from the rural backwoods communities as they sought to secure control of the south before returning their focus to the northern campaign against George Washington.  Greene decided to divide his army into two groups, sending half of his forces west with General Daniel Morgan to cross the Catawba River to attack British supply lines and encourage support from the population.  British General Cornwallis responded by sending cavalry and infantry led a young but capable Lieutenant Colonel named Banastre Tarleton in pursuit of Morgan.  The previous year, Tarleton had been involved in a battle where surrendering Colonial troops had been cut down, giving rise to the term "Tarleton's Quarter" meaning no prisoners would be taken.  Nevertheless, Morgan decided to stop his army, which had been bolstered by the arrival of militia led by Andrew Pickens, and prepare to face his pursuer in battle rather than risk being overtaken while crossing the Broad River.  The Patriots made camp in a hilly field that had been primarily used as grazing land for cattle. 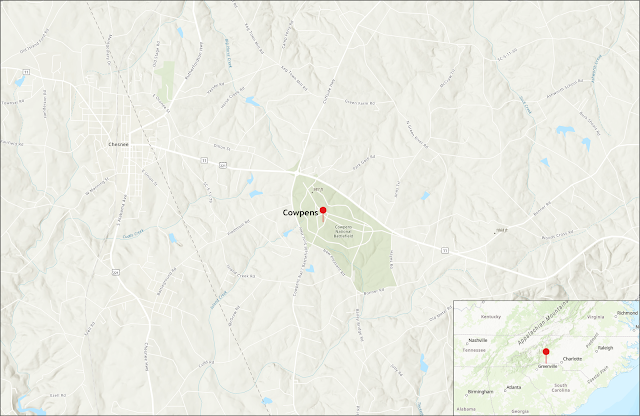 While Morgan's troops rested, Lt. Col. Tarleton was concerned that rain would hinder his pursuit and therefore drove his forces hard to catch up.  On the morning of Jan. 17, the British unit had pressed ahead since two in the morning and they launched their attack at daybreak without a chance to rejuvenate.  Gen. Morgan placed his militia sharpshooters in a first line, followed by a second line of Pickens' militia, and then cleverly created a third line of Continental Army regulars to their rear behind a small wooded hill.  As the first two lines provided little resistance to the advancing British before beginning to retreat towards the unseen third line, Tarleton believed he had taken the field and ordered a full advance, including his reserve cavalry that had initially been held back due to swampy terrain.  Beyond the hill, the attackers quickly realized that they had fallen into a trap as Morgan halted the retreat and ordered a full volley from the three combined lines.  As the British halted in their tracks, the Americans began a bayonet charge against their weary opponents as cavalry under the command of Lt. Col. William Washington rode in to pursue their mounted British counterparts.  After a brief skirmish and finding themselves completely enveloped by the Patriots, the majority of the British regulars surrendered as Tarleton himself managed to escape with only about 50 of his men.  After the battle, Morgan took some 500 British prisoners and continued his journey across the Catawba River to rendezvous with General Greene.
View of the battlefield terrain from the General Morgan's vantage point: 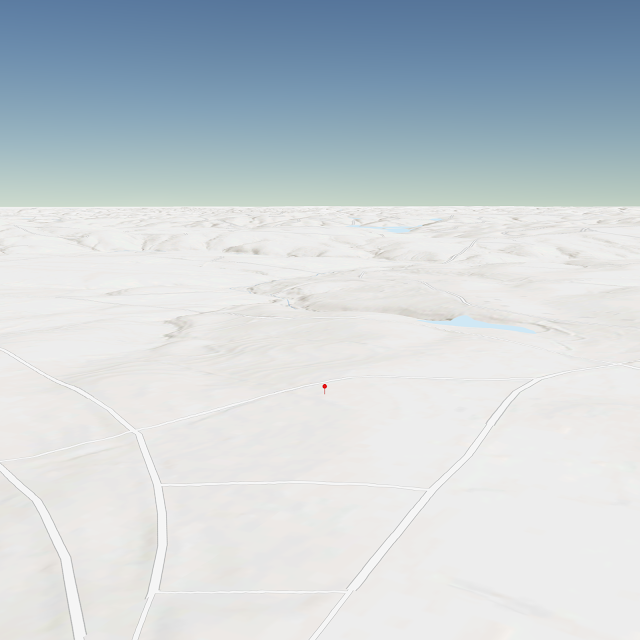 Geography:
The two most important factors in the battle were the hills and the rivers.  With the swollen Broad River to his back, Gen. Morgan knew his militia would not be prone to retreat as they had in prior engagements.  Lt. Col. Tarleton's forces had crossed several rivers over the previous week and may have been riding hard in order to meet and overwhelm Morgan at the Broad River.  The Cowpens terrain was largely free from shrubs and undergrowth, which would have seemingly created an ideal situation for the cavalry to overwhelm infantry forces, but Morgan's ability to conceal his troop positions behind small wooded hills allowed the Americans to brilliantly surprise and overcome the larger, more professional British army.
Result:
The stunning and complete victory by American forces rallied more support to their cause.  The Southern Continental Army under Greene would continue to harass and wear down the British troops for several months before General Cornwallis decided to lead his army across North Carolina to Virginia.  By October, despite having won several costly victories over both Greene and Marquis de Lafayette, Cornwallis found himself trapped at Yorktown, VA as General George Washington joined the fight from the north and the French navy blockaded any chance of support from the east.  On October 19, just nine months after the Battle of Cowpens, Cornwallis would surrender his army to Washington, effectively putting an end to the war and securing American independence.