Geography of War - The Battle of Thermopylae

- May 30, 2022
The Battle of Thermopylae (Greco-Persian Wars)
Date:
Summer 480 BC
Modern Location:
Central Greece
Combatants:
Persian Achaemenid Empire (led by King Xerxes I) vs. Greek city-states (led by Sparta's King Leonidas)
Summary:
In 490 BC, forces under Persia's King Darius the Great were halted during his attempt to control all of the Greek city-states at the Battle of Marathon - a rare defeat for the successful empire-builder.  Ten years later, Darius' son and successor personally led an even larger army in an attempt to subdue the unruly population which had created a coalition of forces led by the soldiers of Athens and Sparta.  While an accurate count of Persian soldiers will never be known, it is likely the force numbered close to one hundred thousand at the time of attack, with reinforcements of similar numbers on their way.  Against this onslaught, Sparta's King Leonidas formed a band to delay the invasion, including 300 of his own hoplites (trained soldiers equipped with long spears and brass shields and armor) and a group of fighters from other states that numbered several thousand.  Against such daunting odds the Greeks utilized their knowledge of terrain to hold the Persians at bay for three days at a narrow pass near a group of hot sulfur springs that, according to mythology, was one of the gates to Hades.  It did indeed become the path to the land of the dead for many Persians and Greeks who engaged in battle.  The Persians were unable to breach the Greek defenses until Leonidas was betrayed by a local farmer who showed Xerxes' elite forces, known as the Immortals, a mountain pass that led behind the Greeks.  Surrounded, the remaining Spartans and perhaps 1,000 Theban and Thespian soldiers made a final stand while the remaining forces retreated.  Leonidas and his small army was destroyed, opening the pass to Xerxes to continue his invasion of central Greece.  The significant losses that the Persians incurred, however, coupled with staggering naval defeats led to the stalling and eventual failure of the invasion in 479 BC. Geography:
Thermopylae, meaning "hot gates", was a strategic location that has been host to several significant battles throughout history.  Although today the water of the Malian Gulf to the north is much farther from the mountain cliffs, at the time of Leonidas' last stand it was a narrow, marshy strip that was pinched to less than 50' wide by the presence of a wall at a point know as the Middle Gate where the Greeks staged their struggle.  Superior tactics and equipment allowed the defenders to negate the  numeric advantage of their attackers.
Modern terrain surrounding the battlefield with presumed shoreline, ca. 480 BC: 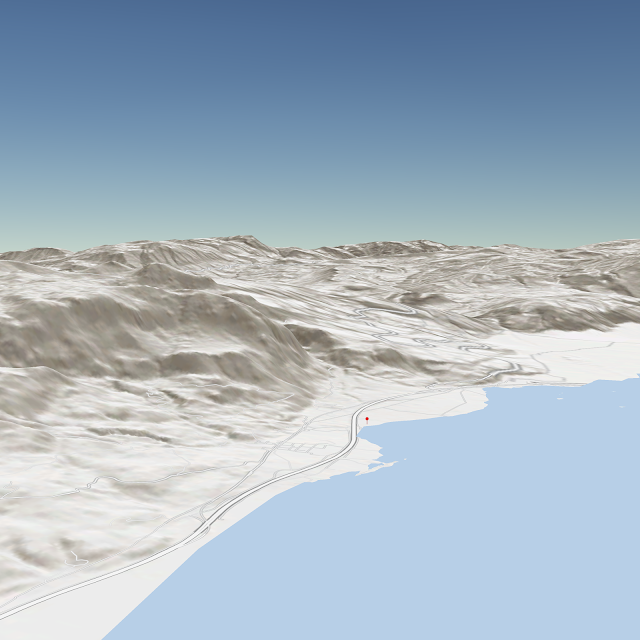 Result:
The Persian Achaemenid Empire stretched from modern India in the east to Egypt in the south.  Already controlling much of the Balkan peninsula and Macedonia to the north, a victory by Xerxes could have extended his control well into Europe.  The confederation of Greek cities that withstood the invasion laid the groundwork of unity that became the cornerstone of Alexander the Great's empire the following century.  As Sparta did not pursue political or economic influence over their neighbors, Greece would be dominated by Athens for the next 50 years, which was rebuilt in splendid fashion after having been leveled by Xerxes (including the construction of the famed Parthenon atop the Acropolis) and became home to such figures as Herodotus, Thucydides, Plato, Socrates, Sophocles, and Aeschylus.  Many of the seeds of modern Western culture - architecture, literature, philosophy, and government - were sewn by such individuals, which likely could never have taken place under Persian rule.