The changes that were brought about by the hurricane that hit Galveston on September 8, 1900 simply cannot be overstated.  Formerly the largest city in the state of Texas, the most important port city along the Gulf Coast other than New Orleans was also home to the most mansions, millionaires, and modern amenities.  With a population over 36,000 people on an island that only rose 5' above sea level, the 120 mph winds were only the second-most destructive element of the hurricane.  A storm surge lifted the sea 15' in advance of the arriving storm, catching the sleeping city unaware, drowning thousands, and cutting off residents from the mainland.  Without any method of communication, it was two days before anyone was able to reach Houston in order to request aid for the ruined island community.  Bodies were so numerous that burial was impossible, and attempts were made to dump both humans and animals into sea.  After those remains once again washed ashore, massive funeral pyres were created to dispose of the dead.  Estimates of fatalities range from a conservative 6,000 to a staggering 12,000 dead.  Galveston was never the same. 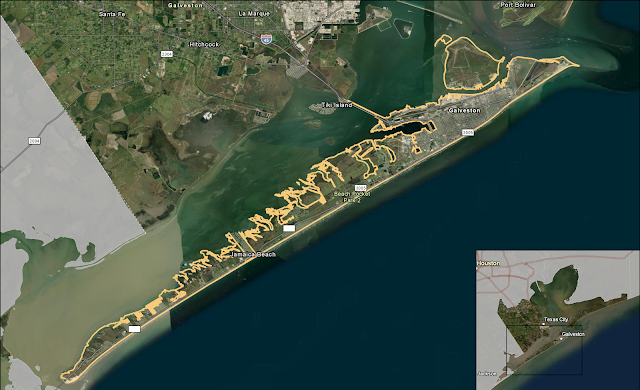 Survivors would not let the city die, however, and the process to rebuild and recover began immediately.  A military base that would become known as Fort Crockett had been under construction before the hurricane and was eventually completed by 1903.  Over its lifetime the beachfront location would serve as a recreation facility, training center, anti-submarine base, and prisoner-of-war camp.  To prevent similar destruction from future storms, a seawall was built to a height of 17' across the entire island and an estimated 2,200 structures behind it were raised several feet as well.  The effort was a success, as a major storm in 1915 caused significantly less damage and only cost 8 lives.  The Port of Houston diverted much of the shipping traffic away from the island, discouraging investors from pouring money into the city's rebuilding efforts, but many of the wealthy residents in town (with family names like Moody and Kempner) developed their own plans to restore its prosperity.  Additionally, efforts were made to divert certain minority groups from crowded East Coast cities to Galveston, including Greeks, Jews, and Italians.  In 1910, two Italian brothers moved to Galveston and would turn the city's fortunes once again.

Salvatore and Rosario Maceo were born in Palermo, Sicily and immigrated to Louisiana in 1901.  Seeing opportunity in Galveston that could not be realized as simple barbers on the outskirts of New Orleans, the brothers moved to the island town with the intention of starting a business.  Sam and Rose, as they became known, moved quickly from establishing a rapport with local gang leaders to developing an entertainment empire that expanded to various towns throughout southeast Texas.  Locals welcomed the business brought by the resorts the Maceos ran, and governing officials generally looked the other way when certain laws were ignored.  The resort and entertainment industry brought tourism and prosperity not seen on Galveston Island since the 19th century.  Locations such as the Hollywood Dinner Club and the Balinese Room attracted the most famous celebrities in America and the most affluent gamblers from across the region, and illegal bootlegging, gambling, and prostitution were business as usual.  It wasn't until 1957 that the Texas Rangers were finally able to put the clubs and casinos out of business for good, and while the lawmen were celebrated for their moral victory it once again caused Galveston to sink into an economic recession.

The 1980s finally brought about a revival to the island as George Mitchell, a successful oilman who was born in Galveston, spearheaded a revitalization effort that boosted the city's tourism appeal once again.  The Strand was registered as an historical landmark as many of the island's older properties (both commercial and residential) began to be better protected and managed.  A 19th-century tall ship named Elissa was restored and returned to the bay side of the island to serve as a floating landmark and museum.  Mardi Gras parades and a holiday "Dickens on the Strand" celebration have highlighted a tourism emphasis on families, and the 21st century has seen Galveston once again become an attractive destination.  Although the city itself remains susceptible to tropical storms and economic volatility, the combined lure of recreation, history, and a quirky island culture seem to keep visitors coming back and residents content to stay.