Welcome back to our continuing story of Galveston.  If you haven't already read Part 1 I'd encourage you to do so (after all, this post will still be here when you finish).  We left off with the Port of Galveston serving as an important location during the Texas war for independence in 1836, but a permanent city had not been established since the destruction of Jean Lafitte's Campeche settlement.  That all changed when a group of investors led by a former Canadian fur trader by the name of Michael B. Menard purchased land on the east end of Galveston Island for $50,000 to lay out a new town near the island's port.  By 1839 Galveston was born, incorporated by the Republic of Texas. 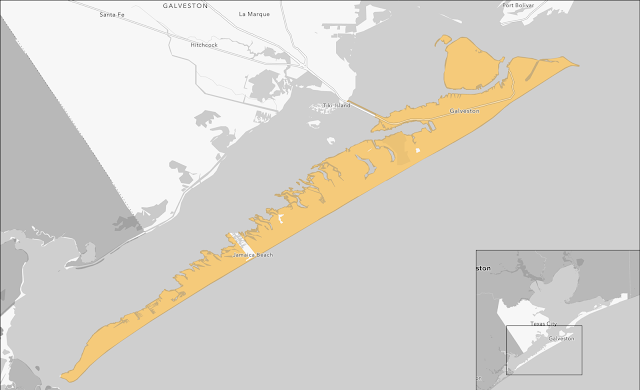 Growth happened rapidly, as the largest port west of New Orleans was already a major immigration point by then.  A railroad bridge connecting the island to the mainland bolstered the value of Galveston's port by allowing the direct transfer of goods between railcars and oceangoing ships.  While many settlers from the United States came from the South and supported the institution of slavery, a significant percentage of the European immigrants and Mexican residents within Galveston opposed it.  A significant majority of Texas citizens hoped for annexation into the United States, but resistance on the basis of the issues of slavery and international relations with Mexico caused a delay until 1845.  In fact, both issues would end up requiring bloodshed to resolve, as the Mexican-American War was waged from 1846-48 and the Civil War followed from 1861-65.

As the War Between the States dawned the city served as an important center for slave trade, despite the objections of many residents, but business throughout Galveston was largely frozen by a Union naval blockade and occupation by federal troops in late 1862.  Soon thereafter, plans were drawn up by the Confederate forces in Texas to retake the vital port city and on New Year's Day, 1863, a daring attack was staged under the command of Major General John Magruder.  Two river steamboats brought heavy artillery and cavalry toward the city while additional cavalry and infantry rushed across the railroad bridge under the cover of night.  While the Confederates were initially repelled on land, their naval forces successfully seized one of the Union vessels.  Union Naval Commander William Renshaw died while attempting to blow up his own grounded flagship to prevent it from being captured, and federal troops laid down their arms in surrender while the remaining ships retreated to New Orleans.

As the only remaining port in Confederate hands for the duration of the Civil War, a significant degree of prosperity came to Galveston which continued into Reconstruction.  On June 19, 1865 Union General Gordon Granger reached the island and historically informed the residents that emancipation had been granted to all former slaves, instituting the celebration of Juneteenth that commemorates the end of slavery across America.  Commercial goods that had been denied during the war flooded into Galveston to satisfy a starved population.  By 1870 Galveston had become the most populated city in Texas, despite a serious outbreak of yellow fever that was not successfully contained until 1873.  The heart of the city's financial district was The Strand, a road lined with businesses that became known as the Wall Street of the South.  By 1885 Galveston was the second-largest immigration point in the United States, surpassed only by Ellis Island.  A diverse, cosmopolitan city over more than 35,000 residents had formed, supporting many firsts in Texas including gas lights, telephone, opera house, medical college, golf course, and cotton exchange.

Future prospects were bright for Galveston as the 20th century dawned, and the city was engaged in a spirited struggle with nearby Houston for coastal supremacy.  In fact, until September 8, 1900 it looked like nothing could slow Galveston down.