To all of you who have been along for the entire tour of Galveston County, thank you for joining me for the trip!  We've finally reached the final stop, and because the city of Galveston, TX is a city with far too much history and too many stories to tell in one post we will take our time telling the tale of this fascinating location.  With a population of 54,774 according to the 2020 US Census, the county seat is the southernmost point of Galveston County and takes up the majority of Galveston Island.  Only 41.05 square miles of the total 211.72 are on land, leaving quite a bit of offshore territory.  Although the city is only 7 feet above sea level, it is protected from the Gulf of Mexico by a seawall that rises approximately 17 feet and extends for over 10 miles.  Separating FM 3005 (known as Seawall Boulevard) from the drop down to the beach is a strip of concrete that is said to be the longest continuous sidewalk in the world at 10.3 miles. 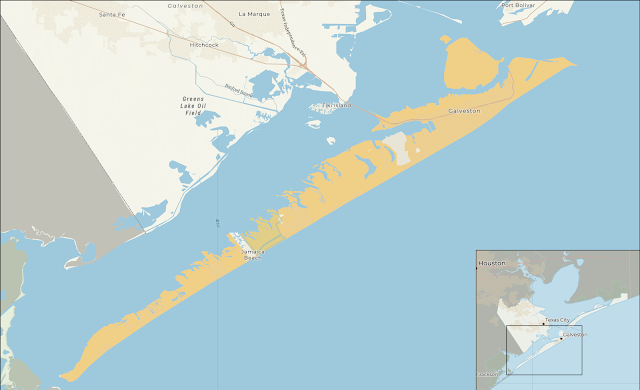 When Spanish explorer Alvar Núñez Cabeza de Vaca was shipwrecked along the Texas Gulf Coast in 1528, just 36 years after Columbus landed in the Bahamas, he and his crew were likely the first Europeans to set foot on the island which he named Isla de Malhado (Isle of Misfortune).  De Vaca encountered both of the Indian tribes that resided there, which we now know to be the Karankawa and Atakapa, and spent as much as four years there as most of the survivors of the expedition slowly died off.  It was over 150 years before another European explorer documented his journey to the area, as Robert Cavelier de La Salle renamed the island San Louis in honor of the French king in 1686.  Despite la Salle's claim the region remained firmly in Spanish control, but other than the periodic stays of the indigenous tribes it remained uninhabited.  By the end of the 18th century the island had been named for Bernardo Vicente de Gálvez y Madrid, a colonial governor who had ordered a survey of the coast in 1786 but never visited the land that would bear his name.

It was 1817 when the first settlement was finally created, and it was built by a pirate.  French privateer Jean Lafitte, who had recently fought alongside Andrew Jackson against the British in the Battle of New Orleans, established the town of Campeche on the eastern end of the island.  In true pirate fashion, it should be noted, he had simply occupied the buildings that had been built a year earlier by rival Louis-Michel Aury while the latter was away conducting a failed raid against Spanish interests.  Lafitte's outpost grew to some 2,000 residents and was largely self-governing as a pirate haven until 1821 when the United States Navy sailed to Galveston Bay to put an end to their smuggling and piracy.  Jean and his brother, Pierre, left without a fight but burned the homes and stockade they left behind.  Mexico, which had recently won independence from Spain, established the Port of Galveston in 1825 and built a customs house on the island in 1830.  By the time the Texan army under Sam Houston defeated Mexican forces at the Battle of San Jacinto in 1836, Galveston had been established as the primary port for the Texas Navy and was even used as the temporary capital during the war for independence.

Be sure to come back next week as we learn about Galveston's role in the new nation, statehood, the civil war, and the city's Golden Age!