This week we're stopping at a city named after the Lone Star State itself - Texas City.  They say that everything is bigger here, and this is a city that follows that mantra with the largest total area of any town in the county at 185 square miles (although the majority of that is covered in water with only 66.28 sq. mi. of land area).  Stretching along a significant portion of the eastern portion of Galveston County's mainland, the city's official elevation rises 10 feet above sea level and is home to 51,898 residents according to the 2020 US Census. 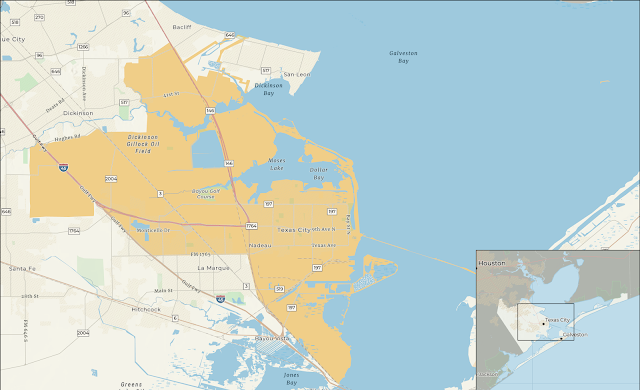 Nine years after Texas became the 28th American state, the US government erected a lighthouse in Galveston Bay that came to be known as the Halfmoon Shoal Lighthouse.  Along the shore to its west, a small community began to form and by the time a post office was created in 1878 the town was known as Shoal Point.  In 1891 a group of three brothers from Duluth, MN visited the area on a duck hunt and were intrigued by what they saw - being shippers on the Great Lakes, they recognized the potential for a deep water port on the mainland, and upon their return to Minnesota they took action.  After drumming up support from others back home, they purchased 10,000 acres of land (including and surrounding Shoal Point), formed the Texas City Improvement Company, and laid out plans for a new town.  By 1893 the Shoal Point post office was closed and the Texas City post office was created, officially giving the city its new name.

The population, most of whom had moved from states along the Great Lakes, moved quickly to dredge a channel and construct a port.  Rail line connections were soon made to connect Texas City with the primary onshore transportation networks, and efforts continued to expand the port and deepen the channel to bring more shipping.  Not everything ran smoothly, however, as the Texas City Improvement Company had financial problems and was forced to reorganize into two separate entities, and then the 1900 hurricane halted progress and caused significant damage to the infrastructure.  The port managed to remain open without any down time, however, and by 1905 the government had built a customs house within the town.  In 1908 the first Texas City oil refinery was created, and in 1911 the citizens voted to incorporate and held their first official elections.

The community was already growing rapidly by the time the US Army sent the Second Division to town in 1913, adding 14,000 residents to Texas City.  The First Aero Squadron was also based in Texas City for a time as the predecessor to the modern US Air Force.  But in 1915, the same year as the city's dike was completed, a major hurricane slammed into the Texas Gulf Coast and destroyed the army camp.  Nine soldiers were killed and the rest were relocated to San Antonio, which served as a devastating financial blow.  Attempts to improve industry were underway when the Great Depression hit and caused the closure of Texas City's sugar refinery and many of the stores throughout its business district.  Nevertheless, the emerging oil and gas industry continued to grow and support the population until World War II brought new businesses such as the western hemisphere's first tin smelting plant in 1940.

After the war ended, hopes for an extended period of prosperity were shattered on the morning of April 16, 1947.  A French ship holding a cargo of ammonium nitrate caught fire, and before the blaze could be extinguished a massive explosion occurred which killed well over 500 individuals and destroyed much of the city.  Fires and additional explosions continued over a period of several days, while assistance poured in from points around the globe.  It was the nation's largest industrial accident as well as one of the largest non-nuclear explosions in history - individuals 11 miles away in Galveston to be knocked off their feet, two planes flying overhead were blown out of the sky, a 15 foot tidal wave pushed at least one boat out of the water, and a geologic station in Denver, CO to record the event as an earthquake.  The city was forever changed, but the recovery process was vigorous and provided needed jobs and support for residents and businesses to rebuild.

Texas City expanded geographically during the following years by annexing nearby communities including The Settlement, the historic community built by former slaves who had worked as cowboys for nearby ranches and paid for their land by driving cattle along the Chisholm Trail.  Plastics and petrochemicals fueled growth for Texas City, and after 1962's Hurricane Carla flooded the town a seawall was constructed to help prevent future inundation.  Many civic improvements were made over the following decade, including new city parks, a civic center, and a junior college, before the 1970s brought a series of corporate mergers that affected several of Texas City's refineries and an embargo from several Arab nations that caused turmoil for all Americans but especially those in cities with economies focused on oil.  By 1980 Texas City boasted the third largest port in Texas and eleventh largest in America, and in 1991 they dedicated the Memorial Park and Cemetery in honor of those who died in the 1947 explosion.  The new millennium brought new challenges, including a 2005 explosion at the BP refinery that killed 15 and Hurricane Ike in 2008 that didn't breach the city's seawall but did destroy all structures and facilities along the Texas City Dike.  Today the community continues to expand in spite of the difficulties they've encountered as citizens embrace their city motto: "The city that would not die".