As we approach the end of our tour of Galveston County, we've finally arrived at what is now the largest city.  With a 2020 population of 114,392 according to US Census Bureau data, League City surpassed the county's namesake city during the years immediately following the dawn of the 21st century.  With an elevation of 20 feet above sea level, the city covers an area of 53.06 square miles (of which 1.80 sq. mi. is covered by water) and sits at the midpoint between Houston and Galveston.  On a personal note, League City is important to my family as it was our home for three years, and is where my kids go to school as well as where both my mom and wife have worked at various times over the years. 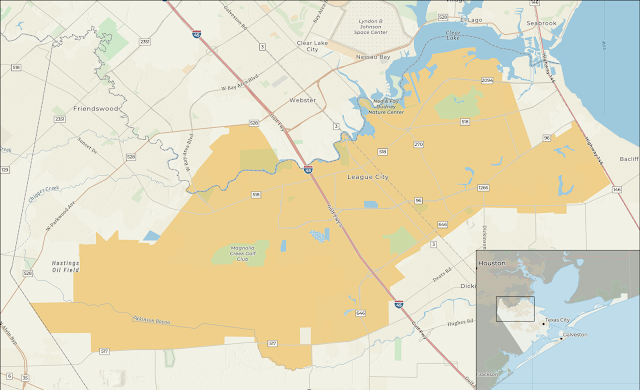 As with most of the region, the area now known as League City was originally populated by various native tribes.  A significant archaeological site along the northern boundary (shown in the map above as land extending into Clear Creek next to the labeled nature center) contains the oldest shell midden in the region - a pile of shells and other remains of human activity that provides valuable clues to the area's history of habitation.  The arrowheads, tools, ceramics, and other artifacts show that various people groups have lived on these lands for well over 6,000 years.  The Karankawa Indians were the last indigenous peoples to inhabit what became League City until the 19th century when only a small population remained and the Mexican government granted the land to an Irish priest named Michael Muldoon.  A close friend of both Stephen F. Austin and Mexico's General Manuel de Mier y Teran, Muldoon was active in serving the non-Mexican settlers who were legally required to accept the Catholic faith before purchasing land, and he was instrumental in convincing Mexican President Antonio Lopez de Santa Anna to release Austin from his prison in Mexico City immediately prior to the Texas Revolution.

The first settlers to arrive on Muldoon's land were interrelated families from Louisiana named Butler, Perkins, and Cowart, who had a goal to develop a cattle ranching enterprise.  George Washington Butler is credited with becoming the first town resident in 1873 of what became known interchangeably as either Butler's Ranch or Clear Creek.  The Chisholm Trail had been established in 1867, and Butler and his two brothers were among the many ranchers who drove their cattle north to Kansas along the famous route.  The Butler Ranch and Cattle Station sat along the western side of the Galveston, Houston, and Henderson Railroad, supporting the growth of the town.  During the 1890s George Washington Butler, by that point the community's Post Master, convinced a wealthy Galveston resident named John Charles League to purchase land on the eastern side of the rail line and plat a town.  What began as cooperation between the two men quickly descended into a minor feud as League had the city's name changed from Clear Creek to League City in 1893.  For six years, depending on who held the most political power at the time, the post office bounced back and forth from the east side to the west side of the tracks until League's supporters finally emerged "victorious" and the two towns officially merged with the name of League City.

Among the community developments overseen by Butler and League were a school house, a city park, and a commercial district.  The Butlers had planted acorns brought from Louisiana when they arrived, and in 1907 they partnered with League to have railcars full of oak trees brought into town for other residents to plant.  A number of the original trees that were placed near the rail station have survived along Main Street to this day, and the oak has become the official symbol of the city.  During the early years of the 20th century the town became more diverse as well, with a number of immigrant families arriving from the Piedmont region of Italy as well as a small Japanese community that had begun to farm rice, figs, and Satsuma oranges.  As League City expanded it created its own school district, which eventually merged with the Clear Creek ISD, and by 1962 residents voted to incorporate.  New neighborhood construction and annexations fueled a population boom that saw the number of residents increase by at least 50% each decade for the next 50 years.  Today the town that was once just a railroad stop with a cattle ranch has grown into one of the 5 largest suburbs of the greater Houston area.

Stay tuned next week as we begin a multi-part look at the final city along our tour - historic Galveston itself!