This week, on our tour of cities in Galveston County, we take a break from some of the big towns we've visited recently to stop by another one of the smaller communities.  But if location means anything, then Bayou Vista is a prime place to be.  According to the 2020 US Census, this town had a total of 1,763 residents, and a total land area of 0.45 square miles (of which 0.13 sq. mi. is water).  Like its neighbor, Tiki Island, this town was built from the marshy wetlands near Jones Bay, which separates Galveston Island from the Texas mainland, and its elevation is therefore a mere 3 feet above sea level.  The citizens embrace their proximity to the bay, however, and have adopted the motto "Where living on the water is a way of life." 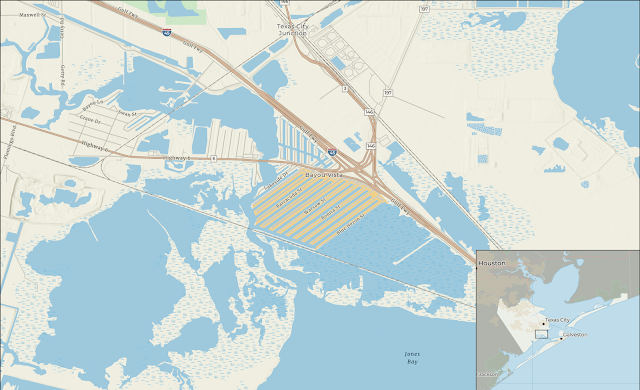 Sitting at the intersection of I-45, Highway 6, Highway 146, and Highway 3, this small town's site has always been at the crossroads of Galveston County.  Shortly before the Texas Revolution began, a land grant that included everything near Virginia Point, the nearest point along the mainland to Galveston Island, was given to Samuel C. Bundick.  Because the grant was largely covered marshland, the area had limited value on its own, but was strategically located - nearly all transportation to the coast traveled through the area, including multiple railroad lines.  Not even the nearby oil and gas prosperity reached this area, however, as every well that was drilled within the Bundick survey extents was a dry hole.

Good location and cheap property, however, meant opportunity.  Not long after World War II, a man named George Saconas began buying up the land that would eventually form Bayou Vista.  He had experience with canal development in Florida and believed it would work along the Texas Gulf Coast.  By 1953 he had begun building Texas' first canal development, with every homesite or "fish camp" sitting along manmade canals that had been dug to a depth of 5 feet.  Flooding caused by Hurricane Carla in 1961, along with the realization that even greater water levels had been reached during the hurricanes of 1900 and 1915, made it clear that the homes needed to be raised to remain livable.  With limited land area on each lot, however, this allowed for additional storage and parking beneath homes and therefore did not greatly hinder the town's growth.  In fact, the developers soon took steps to expand Bayou Vista from the original 123 lots to its current total of 917 households.

The community faced several limiting factors that prevented additional growth, including regulations that began to take shape throughout the second half of the 20th century that were designed to protect wetlands.  Improvements were made to provide homeowners with better utilities and transportation, and nearby bridges were raised (including the railroad to the south and Highway 6 to the north), and this improved the appeal and value of the city's waterfront access.  The area was popular with residents and had plenty of visibility along the nearby highways, and therefore expansion continued until Bayou Vista incorporated in 1985.  Today the neighborhood has sustained several damaging hurricanes, most recently Ike in 2008, but remains resilient and maintains a sense of community with events such as regular boat parades along its canals as well as various cook-offs and fishing competitions throughout the year.