The focus of this week's stop during our tour of Galveston County is a place where I've spent plenty of time, because in addition to being a great place to visit, eat, and play, it's also where my parents used to live for a number of years.  And while they lived there we had our first kid, so it was important to visit the grandparents often, right?  This city by the bay, right next to the very first town we visited on this rambling adventure through the county, is Kemah, TX.  According to the US Census Bureau the community boasts a 2020 population of 1,807, and nestled at the far northeastern extent of the county where Clear Lake empties into Galveston Bay it has a total elevation of just 7 feet above sea level.  Of the city's 1.91 square miles, the vast majority is land with just 0.07 sq. mi. covered by water. 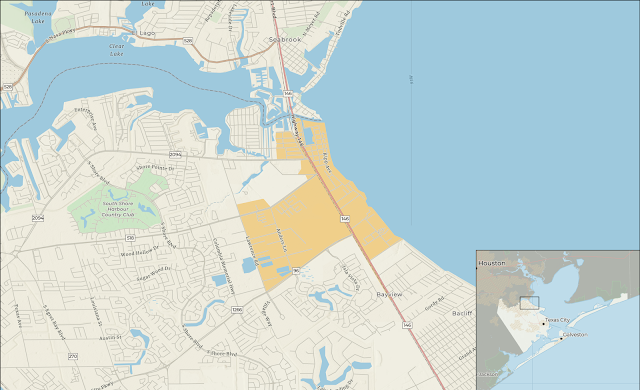 For being such a small city, Kemah has a big impact on Galveston County and beyond, including being ranked as the #1 tourist destination in the Houston area just one decade ago in 2012.  Its history is short but lively, beginning when the two primary landowners in the area (who had bought up much of the original Spanish grant given to Michael Gouldrich) decided to parcel out their land to lay out a town in 1898.  The community that John Henry Kipp and James Bradford created was named Evergreen, and sat along the Southern Pacific Railroad line that came through town.  The area had been known as Shell Siding for a while, due to the significant amount of shell that Bradford had been selling from a large shell reef that extended into the water from his property.  Kipp was responsible for attempting to bring a post office to town, but the request was turned down because another community was already using the name of Evergreen.  The few residents that remained after the devastation of the 1900 hurricane decided on the name Kemah, which was derived from an Indian word meaning "wind in the face", and that became the new official name when the post office was created in 1907.

The Great Depression hit the wallets of residents of Kemah, causing a population decline as families were forced to leave.  The Maceo brothers from Galveston and the Salvato family from Dickinson invested in the area, and the entertainment they brought to town improved the appeal and economy tremendously.  The boardwalk that overlooked the waterfront housed a number of casinos housed within restaurants with names like Kemah Den, Jimmie Walker's Edgewater Lounge, and Chili Bowl, which thrived until the illegal gambling empire was toppled in the 1950s.  Whatever the Texas Rangers failed to close, Hurricane Carla damaged or destroyed in 1961, and the Kemah economy was forced to re-invent itself.  Industries included oil, ship-building, and fishing, but fortunately for the city 1961 also brought around the promise of a bright future as NASA began to plan out their Manned Spacecraft Center on undeveloped land along Clear Lake.  Many homes near the water were repaired and converted to businesses, which today form the city's Lighthouse District.

A new drawbridge into town along highway 146, coupled with the region's growth in population and prosperity, led to the city's incorporation in 1966, and Kemah benefitted from a spike in popularity for recreational boating.  A new marina was promoted by longtime mayor Ben Blackledge, and the sleepy town with roads made from shells suddenly became paved and modern almost overnight.  Jimmie Walker's Seafood Restaurant was brought back to life in 1987 shortly after the original drawbridge was finally replaced with a larger fixed bridge, and these two events simultaneously brought back a glimpse of the past while opening the door to the future.  Two years later, the man who would change Kemah forever purchased the restaurant and its property - Tillman Fertitta.  The restaurateur and developer renamed the location after his trademark brand, Landry's (although he kept the name Jimmie Walker on the side of the building), and soon began purchasing additional adjacent properties.  In 1997, Landry's Inc. developed and opened the Kemah Boardwalk, which is now a nationally-recognized, large-scale hospitality and amusement attraction.  Despite the impact of multiple hurricanes, including 2008's devastation brought by Ike, the boardwalk continues to be the focal point of a tremendous tourism industry that complements the boating and shipping businesses in town.  Today, the bridge into town is being expanded to double its width as Kemah continues to grow and provide enjoyment to its residents, visitors, and guests.