A quick thank-you once again to everyone who takes a moment to read this blog (whether it's just once, once in a while, or every week).  Blowing past 40,000 viewers is a bit mind-boggling for me, and the regular traffic is a big reason I have kept making sure there's something new to look at each week.  This week's stop is a small community on the edge of Galveston Bay - the town of Bacliff.  Of the 2.7 square miles that make up the city limits, only 0.2 is water and 2.5 is land.  The 2020 population stood at 9,677 according to the US Census Bureau, and the town's elevation rises just 16 feet above sea level.  That height, however, is slightly higher than other points around the bay and has actually prevented some of the flooding damage seen by nearby cities. 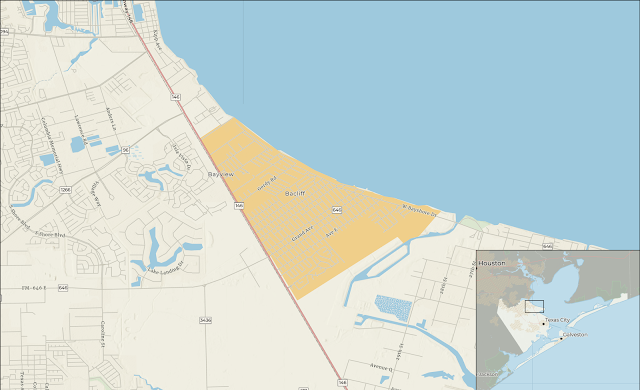 Shortly after the dawn of the 20th century, the Great Hurricane of 1900 had wreaked havoc on the development of communities stretching from Galveston to Houston, and by 1910 a pair of local landowners decided to build a recreation and resort area that they called Clifton-by-the-Sea.  In addition to hotels and summer homes, the area boasted a bathhouse and an open-air performance pavilion that was built on a pier over the water.  Population growth was slow and faced several headwinds, however, including a hurricane that damaged much of the town in 1915 and a fire that destroyed the pavilion in 1924.  Each time the area was rebuilt, until a hurricane in 1943 destroyed both the bathhouse and pavilion for the last time and signaled the end of the city's resort era.

After World War II ended, Clifton-by-the-Sea began to attract new residents who worked in the nearby oil and petrochemical industries, and by 1948 the US Post Office was ready to establish a location there...but did not approve the name.  Since Clifton was already being used by another town, the residents opted to name the post office branch after one of the larger subdivisions, Bay Cliff.  The name, however, was misspelled on the paperwork and the name became Bacliff from then on.  In 1964, Houston Lighting and Power constructed a power generation plant at the southern edge of town that remained in service until it was closed in 2003 and later demolished in 2012.  The economy of Bacliff is now almost entirely dependent on surrounding cities, where most residents commute for work.

Like its neighboring town of San Leon, residents have resisted incorporation for a number of years and had similar issues with disputed land ownership that prevented many businesses from being established within the community.  During the 1980s there were multiple attempts to incorporate or merge with other towns, but the only result was to release Bacliff and surrounding neighborhoods from the extraterritorial jurisdictions of Kemah, Texas City, and League City.  Today the town is serviced by the Galveston County Sheriff's Office, a volunteer fire department, and a single elementary school as part of the Dickinson ISD.