This week our tour through Galveston County returns to the western side of the mainland.  Santa Fe is a city that exists, not primarily due to the wishes of its own residents, but to those of the neighboring city of Hitchcock.  According to the US Census Bureau a total of 12,735 residents populate this town which sits along Highway 6 at an elevation of 30 feet above sea level.  The city has been incorporated since 1978 and now includes a total area just over 17 square miles. 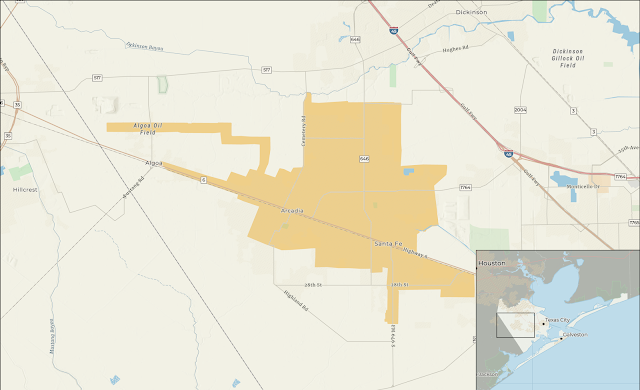 The story of the town began with a railroad - the Gulf, Colorado, and Santa Fe - that sought to connect Galveston Island with the inland part of Texas without passing through Houston.  Founded in 1873, its goal was to traverse Texas and terminate at Santa Fe, New Mexico Territory.  Work began in 1875 and by 1877 enough track had been constructed that the line extended beyond the county's edge.  Several communities began to grow along the line, including a few in western Galveston County by the names of Alta Loma, Arcadia, and Algoa.  Alta Loma, home to the Alta Loma Lumber Company, was supposedly the highest elevation point in Galveston County.  The Santa Fe Independent School District was formed soon thereafter, taking its name from the railroad rather than any of the communities, but through the years the populations of these rural towns remained small.  The simple life that residents enjoyed became somewhat more complicated in 1975, however, when they found out that the Hitchcock Commissioner's Court had begun to consider annexation of the Alta Loma neighborhood.

The move was perfectly legal even without the consent of the citizens, as the small community was within Hitchcock's extraterritorial jurisdiction (in fact, the train station which had originally given Hitchcock its name sat within Alta Loma), but it was not popular and stirred up significant resistance.  Aware that their only options were to incorporate or risk annexation by any one of several nearby cities, Alta Loma voted to merge with a portion of Arcadia and take on the name of Santa Fe.  Although Hitchcock began to move forward with an attempted annexation late in 1977, Santa Fe was officially incorporated on January 21, 1978.  Ironically, although residents were initially opposed to being annexed, they continually increased the size of their town by gradually absorbing additional neighborhoods until all of Arcadia and significant portions of Algoa were included within the city limits.  Although Santa Fe is less than half the size of Hitchcock, its population today outsizes its neighbor by over 5,000 individuals.