One of my favorite Christmas classics features a scene where the main characters sing a fun song about how they miss the good time they had in the army.  One of their reasons was that there was always someone else in charge where they could "pass the buck" for any bad decisions or outcomes.  This may have been a subtle reference to President Harry Truman, who was said to have a sign on his desk in the Oval Office that read, "The Buck Stops Here".  With all due respect to the imaginary soldier buddies, I think the man who had climbed to the highest office in the land had the right idea.  And it wasn't just a motto - he was willing to make the biggest decisions that led to the end of WWII.  To become successful in any endeavor, you must accept responsibility for your actions. 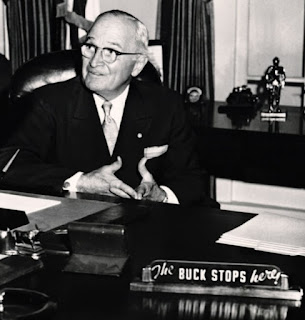 It seems as though every time something bad happens, there are those who want to assign blame.  Sometimes the rationale is good - we need to know the cause of a problem to keep it from happening in the future.  But all too often what we really see is not an effort to improve society, but rather to punish someone we're mad at or even just to gain a more favorable standing than someone else in the "court of public opinion".  These games of climbing above others by tearing them down can have significant costs.  No wonder people develop the habit of deflecting responsibility!  If you can point a finger, you might avoid paying a penalty, right?

Except that's not a winning formula.  Responsibility is tied to integrity - and sometimes being honest is not the most enjoyable character trait.  Did your parents, like mine, ever say things like "honesty is the best policy"?  As Americans we've held up leaders like "Honest Abe" Lincoln as good examples, and made up stories like George Washington cutting down the cherry tree but refusing to lie about it.  Obviously there's something admirable about someone making the tough decisions, even when it may appear to cost them.  I don't think anybody could ever be inspired by another person's excuses or victim mentality.

Taking responsibility is proof that you can be trusted.  It shows that you have a higher ideal than simply taking care of yourself.  It displays courage and conviction.  It will make your friends appreciate you more and will take away many of the attacks that enemies could use against you.  Whenever you have a difficult decision to make, do the best you can and then stand by your choice without stooping to assign blame if anything goes wrong.

To practice making hard decisions, start with the easy ones.  The next time someone asks where you want to eat, make the first suggestion!  We all make lots of choices each day, so attempt to be more resolute with all of them.  And if it doesn't work, accept the result and learn from it as you move forward.

A book by a West Point graduate and Airborne Ranger, Jay Rifenbary, entitled No Excuse! I'm Doing It will not only help explain accountability, but will help develop a "No Excuse" mindset in your own life.