- September 05, 2021
"The dog did it!"  Have you ever blamed a pet for something, maybe a mess that was discovered on the floor or a nasty smell in the air?  It's easy to point fingers at an animal that can't defend itself.  When my kids were babies, I used to jokingly blame them for doing things around the house before they were even big enough to crawl.  While these may be funny examples, you may have noticed that it's not always easy to claim responsibility.  But like it or not, it's a sign of maturity to refuse to give excuses. 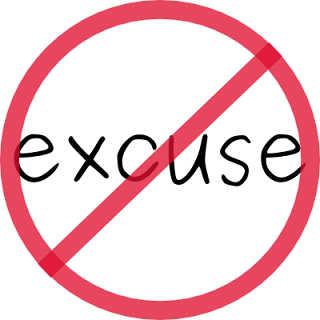 I don't really know who said it first, but I used to hear that the definition of an excuse is "the skin of a reason, stuffed with a lie."  When you put it that way, they don't really sound very good!  Then why do they show up so often?  I think the biggest reason is because so many people don't want to admit (or even believe) that they're the cause when something bad happens.
I didn't get a good grade?  The teacher didn't cover something well enough.
I didn't get the part at the audition?  Whoever got it must be friends with someone making the decisions.
I was late this morning?  The weatherman and the traffic lady both guessed wrong on conditions during my drive.
Do you see the real problem?  For every excuse we can give, there's someone else who overcame the same obstacles to achieve the very things we wanted.  Whenever we blame someone else, doesn't that mean we're also saying they have more control than we do, and that we need their permission to succeed?  We've given away our own power to accomplish significant goals!
It can be humbling, even painful, to realize that you are in life pretty much exactly where you've decided to be.  We're all the sum of our choices.  Yes, some people seem to catch more breaks, but if we're honest with ourselves we know beyond a doubt that certain people have had it much worse than we have but still accomplished more.  There's no need to be sad about it, because at any point we can look in the mirror and take responsibility for our own progress.  No blame, no complaints, no excuses!
PRACTICE!
Write down 3-4 bad results you've had recently.  Then, rather than focusing on external causes, list things you could do next time to overcome the obstacles you faced.  Making a mistake is never final, but making the same mistake twice means you need to make sure you've learned the lesson.
MORE INFO
The Magic of Thinking Big by David Schwartz, Chapter 2 - Stop Making Excuses.  A pivotal book for me, and this chapter made a big difference on my own journey when I read it as a college student.