Have you ever played paper, rock, scissors?  I always thought it was a little goofy, because nobody seems to understand how paper beats rock.  My brother and I tried coming up with different items to put into the game, but eventually someone would try to introduce dynamite and to our young minds that beat everything so why continue to play after that?  You know what actually does beat paper, scissors, and rock in real life...without any explosions?  Water!  That's right, it can soak paper, rust away scissors, and erode even the biggest rocks.  In fact, some of the neatest places to visit are natural formations caused by the gradual wearing away of rocks - Grand Canyon and Arches National Park are two of my own favorites.  How does water do it?  Through effort that remains steady, persistent, and consistent over time. 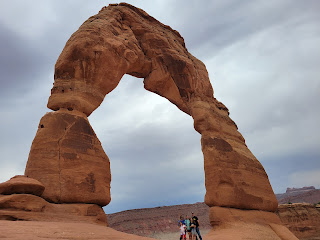 When each of us decides what we want to accomplish and we get help identifying the right actions to take, we must be determined to keep doing what must be done.  It's been said that Thomas Edison's lab workers tried thousands of unsuccessful ways to create a light bulb before getting it right.  Would he get credit for inventing it if he had quit after dozens, or even hundreds, of "failures"?  Of course not.  And he knew it, because he famously stated that he'd never failed but instead that he'd successfully proven many ways that it didn't work.  Talk about a good way of seeing things!

What does consistency do for us?  First, it creates a habit - we get used to trying and it makes us stronger (just like exercise).  Second, it creates ability - practicing something repeatedly, especially while trying to continually improve, will naturally make us better.  Third, it creates momentum - just like "objects in motion tend to stay in motion", doing just a bit everyday keeps us from ever having to start over again.  Finally, it creates trust - when others watch us work without giving up, they will know we are reliable.  So be like the constant drip that cuts through rock and never give up!

Pick a success habit, such as reading, and see how many consecutive days you can do it.  And don't worry if you lose your steak because that just provides a chance to kick off a new streak!

"Nothing in the world can take the place of persistence. Talent will not; nothing is more common than unsuccessful men with talent. Genius will not; unrewarded genius is almost a proverb. Education will not; the world is full of educated derelicts. Persistence and determination alone are omnipotent." - Calvin Coolidge, 30th President of the United States