Today we found ourselves in a state that none of us had visited before - Utah.  We started in Moab and wound up in Mount Pleasant (south of Provo).  Plenty of sites to see, and several miles to walk.  Here's the recap!

So, we woke up really early so we could go see arches in Utah.  We walked about three miles and we found some arches with, oddly enough, Wi-Fi. We even saw someone's water bottle roll of a cliff , but it wasn't deep. Later we saw someone else getting it out.  We took a picture under an arch.  Later we found a restaurant with scones and I hadn't tried one until then. So yeah that was day five.

We went to a nice restaurant and saw arches.  Someone's water bottle rolled off the edge. and someone did a handstand under a arch.  And the girls boyfriend got her water bottle back and we all clapped when he got back up.  We took a picture under the arch. So that was day five. 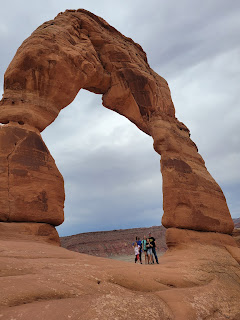