A day of staying put - we spent a second night in the Albuquerque area and saw the sights of northern New Mexico.  Let's see what the girls remember best!

This was the day we were in Santa Fe, New Mexico. We woke up, and saw two hot air balloons while outside. We went to the little, old town, walked around, and bought a few Christmas ornaments. While on the way back to the RV park, we ended up in an area that was highly secured. Dad got searched. The RV got searched for flammable items and weapons. We were not allowed to take any pictures or videos, as it was where atomic items were made and tested. We eventually made it back to our RV park, and watched a movie while waiting to get tired.

So when we woke up we saw two hot air balloons.We also walked into a town.  There were alot of Indian based stuff. We also went into a Christmas shop and got some ornaments. Later we saw a New Mexican history museum. We also saw some Indian dwellings.  Also we saw a deer.

We went to a place where Indians lived and went in a cave it was tiny though but it was worth it we saw where they put their fire and saw a deer - it was a doe a girl deer. 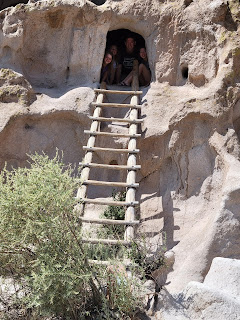