On July 2, 1999, Boston's Logan Airport sustained a lightning strike that temporarily disrupted radar and communication ability.  At least that was the story that I was told in Pittsburgh, PA as my flight to Massachusetts was canceled.  My brother and I were on a trip from Houston, TX to join a three-week European concert tour consisting of approximately 150 high school musicians from across America.  After being forced to stay in Pennsylvania for an unplanned night, we made contact with five other kids and one adult who were also stranded on our way to the same location, and our so-called "Pittsburgh Seven" finally made it to Logan Airport.  That was my very first experience with the subject this week's post. 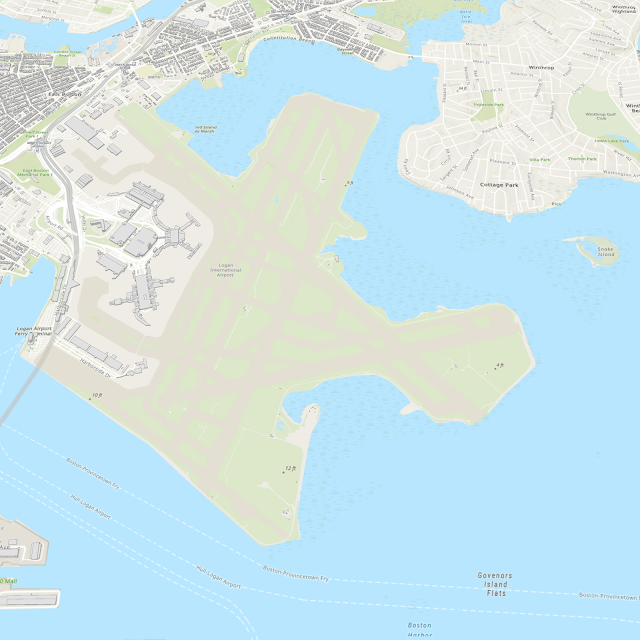 In 1923, less than two decades after the Wright brothers made their historic flight at Kitty Hawk, the first airplane arrived at a new landing strip in the middle of what used to be Boston Harbor.  As we discovered very early in our study of Boston, the city has experienced a tremendous amount of physical growth by filling in portions of the Charles River and Boston Harbor, and the 189 acres of reclaimed tidal basin that supported the new airport was part of that endeavor.  By connecting five small islands it was now possible to support private and commercial flights without taking away limited public land resources or purchasing additional private property.  The first commercial passenger flights began in 1927 from what was then known as Jeffery Field to connect Boston and New York City.  By 1943, an additional 1,800 acres of water had been filled in from the dirt of nearby islands to expand the airport's land area, and it was renamed after Lt. General Edward Lawrence Logan, a respected soldier from the Spanish-American War and World War I who had campaigned vigorously for improved veteran benefits.  After World War II Logan Airport became an international hub, providing service to several European destinations, and in 1951 became home to the first airport chapel in America.

News for the airport has not always been good, however.  In the 1960s an expansion project included taking control of a 46-acre park designed by Frederick Law Olmstead, the father of American landscape architecture.  The park, along with several homes along one of the most desirable streets in Boston, were demolished to make room for Logan's largest runway.  More recently, after years of unease about the lack of security at the airport, the worst fears were realized on the morning of 9/11/01 when two planes departing from Boston were hijacked and crashed into the World Trade Center's Twin Towers in New York City.  In 2013, disaster was averted when a ground crew noticed a fire coming from the battery of a parked plane, and the subsequent investigation led to the grounding of the entire worldwide Boeing 787 fleet.  Like nearly every other major airport, Logan suffered a tremendous drop in traffic during the Covid-19 event of 2020, with total passenger counts falling from 42.5 million in 2019 to just 12.6 million.  Today, as the industry attempts to recover, Boston's picturesque airport remains one of the 20 busiest airports in America.

Now let's just hope the lightning stays away the next time I try to fly there.