Diary of a Homeschool Dad - Week 41

The school year has drawn to a close, and with it my official time as a homeschool dad is ending.  Let's take a look at how the final week went down.

Sunday - When you live on the opposite side of a major city from your church, sometimes you're not inclined to travel back and forth multiple times in a day.  We didn't have much of a choice this time, however, as our activities at church required us to spend the majority of the day on campus.  After spending the morning having the usual service and Bible study, we stuck around for lunch and a Nerf war with our 5th graders, including Curly.  The rain that soaked town all week forced us inside, but these soon-to-be middle school kids didn't let that dampen their enthusiasm as they took over the hallways of the west tower.  Girly was supposed to have training in the evening to prepare her for the summer's Vacation Bible School, but the children's resident did us a huge favor and took the time to work with her individually.  That meant that, after Girly's youth choir practice in the late afternoon, we were free to head back home and get ready for a big week. 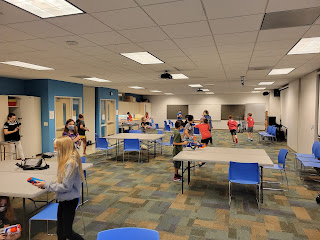 Monday - Finals week at the girls' high school means you only have to go on the days where you have to take finals (and you're exempt if your grades in a class are high enough).  Girly, therefore, only had to take three tests and was only required to be on campus twice.  For the first day of the week, she was free to sleep in and relax.  Whirly has been knocking off classes one at a time, so her work load was fairly limited.  Curly had to be on campus each day of the week, but only for some fun activities.  So for Monday that meant 5th grade field day, complete with team competitions between the four classes in her age group.  I was glad to be able to stick around and watch!  After the kids finished up, I checked Curly out with her teacher and we headed home.  Whirly wrapped up the last of her work early, and we were free to enjoy some free time that was a small dose of what the summer will likely offer.  Girly spent a bit of time at her boyfriend's house before heading out for the evening to her usual cello lesson, where she's starting to prepare for her region auditions in the fall. 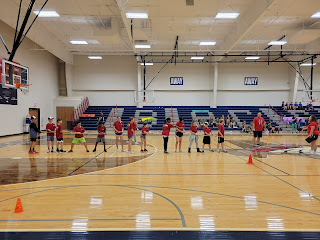 Tuesday - For Girly, today was the focal point of her finals stress.  Chemistry and Spanish have been sources of much frustration, so having both on a single day was interesting.  For Curly, today involved a field trip to the movies (they watched a film called "Facing the Giants") followed by class awards.  My kid won her class' Christian Character Award for the third year in a row!  For Whirly, the day included martial arts and a trio of tests.  They represented the last of her graded work for the year, and the rest of the year will only include reading assignments and a couple of worksheets.  For me, work was pretty hectic this week so any time that wasn't spent serving as dad's taxi service was taken up by map requests. 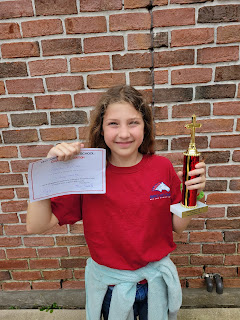 Wednesday - Curly had her "day at the museum" at school that included a number of presentations of the students' work on historical figures and a museum movie, and it also happened to be her final day of having to wear an official school uniform.  Girly barely spent an hour at school to finish her last final exam (geometry) before texting me to come pick her up, and that officially concluded her sophomore year.  Whirly has spent the last week of school having a relaxed overview of the Civil War, learning how to multiply multi-digit numbers and do long division, and looking at how to write a compare/contrast essay - and I don't think she has used a chair for any of it.  The floor is her preferred spot, and I don't mind letting her spend a few days there.  By the time Mrs. Geo got home from work we decided to head out for some Chinese food early before the worst of the wet and wild weather rolled through our side of town. 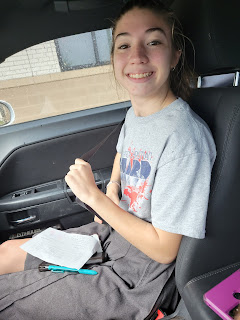 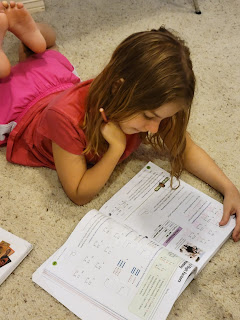 Thursday - This is it, the last day of school!  Whirly knocked off her final three subjects early, played around on a few games with her biggest sister, and then got ready for martial arts.  It was weird, because I couldn't attend with her for the first time since putting on a gi of my own - Curly had early release from school, which fell right in the middle of the lesson.  When I went back to pick up Whirly (in a polo and slacks, rather than my usual workout uniform) some of the other students gave me funny looks.  Curly enjoyed her final day on campus, which included dodgeball against the 6th graders and the school's annual baptism chapel, before coming home to join the rest of the crew.  We all had a celebratory dinner, including the obligatory dessert, to mark the official start of summer.  I finished the day by hitting the mat (on a full stomach...perhaps not my best decision ever) in order to avoid having to make up a martial arts lesson some other week.  In other news, my dad finally got to be mobile for the first time since late January as the hospital staff helped him get set up with a motorized wheelchair.  Continued progress! 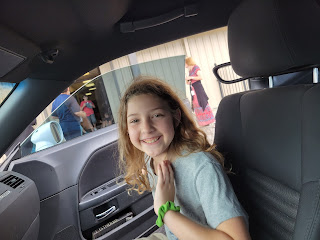 Friday - I told Mrs. Geographist that this day represented a taste of summer, and if that's the case then my kids are going to need some motivation to get away from the electronics.  It was such a soggy day outside that they were perfectly comfortable sitting around in front of various screens, so I had to persuade them to do some other things at points throughout the day (clean rooms, take their clean laundry upstairs, etc.).  I spent most of the day getting work done, which honestly left very little time to do much that would warrant mention.  If you've ever heard someone say "nothing to write home about", this day effectively represented that expression.

Saturday - There are certain times when I do not like having pets, and this particular day served as a perfect example.  For some reason our turtle tank water filter doesn't appear to be cycling the water efficiently enough, and mosquitos began breeding there.  Turtles can eat mosquito larvae but apparently ours wasn't hungry enough for that.  So for several hours, my job was to 1) kill mosquitos, 2) get the turtle out of harm's way, 3) empty the tank to prepare for cleaning, and 4) do something about the smell of bug spray.  Once that nonsense was finished, I was able to clean up and head out with Mrs. Geo.  Several local retailers have dropped or reduced their mask rules, so that's where we go to shop.  Our first stop was the home improvement store for some home essentials, more bug spray, some paint to touch up the walls on the old rental, and some new patio chairs.  Afterwards we split up, with me going to the old house and her getting a few groceries.  Once home, she left to go hang out with some friends for dinner and I took Girly over to her boyfriend's house for a few hours before cooking up some soup to feed the rest of us.  And since I was there anyway, I went ahead and mixed up a batch of banana bread muffins just for fun!  See what amazing skills I've developed since being around the house full time?

And so we've come to the end of the homeschool year.  I'd be lying if I said I loved every moment, but overall we've had a really great time of it and I can't complain.  Spending so much time with my youngest daughter has given us a really cool bond, and even being the one to drop off and pick up the older two each day has provided special moments.  I hope every reader has enjoyed following along with our little journey.  This blog will take a new direction in the coming weeks, and I invite you all to stick around and see what the future has to offer!