Welcome back to the Cradle of American Liberty!  If this is your first time seeing a post about Boston, I would encourage you to go back and look at some of the other information I've written about the historic city.  It seemed important to go back and finish looking into a few of the important sites before taking the blog in a new direction, and with that in mind I'd like to complete our review of Boston's Black Heritage Trail with the final site, the African Meeting House. 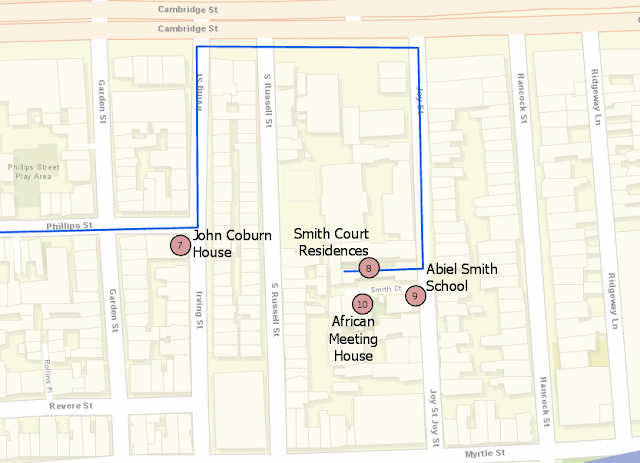 As the 19th century began the legal freedom that many black residents of Boston enjoyed did not guarantee them equal rights.  Although they were permitted to attend the same churches as white Christians, they were not given membership voting rights or permitted to sit on first-floor pews.  A preacher named Thomas Paul had led a group that worshipped and Faneuil Hall, and by 1805 they organized as the First African Baptist Church.  By the end of the following year, land had been purchased and a building constructed.  A man named Cato Gardner, who had been born in Africa, raised such a significant portion of the necessary funds that a plaque recognizing him as the church's first promoter was placed above the front door.

Worship activities, however, were not the exclusive purpose for the building.  For nearly three decades Primus Hall hosted his school in the meeting house basement until funding and construction of the Abiel Smith School was completed next door in 1835.  As a hub for the abolitionist movement the building earned the nickname "Black Faneuil Hall" and was the site where the New England Anti-Slavery Society was formed by William Lloyd Garrison in 1832.  When the Civil War arrived it was a natural location for men like Frederick Douglas to actively recruit soldiers.

The migration of the African American community to the south led to other minority groups populating Beacon Hill, including a Jewish community that purchased the property for use as a synagogue for the bulk of the 20th century.  Recognizing its historical significance, however, the Museum of African American History bought the building in 1972 and embarked on a multi-million dollar restoration to return it to its original design and appearance.  Today it is the final stop along the Black Heritage Trail and serves as a museum and National Historic Landmark.

For more information on the site and the museum, click here: https://www.maah.org/