Diary of a Homeschool Dad - Week 37

- April 26, 2021
Early on in the quarantine, we started hearing about the phrase "new normal" and certain things have definitely changed.  Some of them will be hard habits to break by the time the next school year rolls around and I finally return to my office.  But either way, we're going to try to enjoy each step along the journey!
Sunday - The pews continue to get filled up more each week at church, and now there are no more ropes closing off every second row.  I'm glad to see more folks getting comfortable as they start getting back to being around others.  After church we snagged some Mongolian BBQ for lunch on the way home.  Girly had youth choir in the evening, so Curly and I had an hour to kill before Bible Drill began - Daddy/daughter date night at the Greek restaurant!  Once the kids finished up their final practice before the upcoming state competition, we headed back home where my mom was arriving to spend a few nights.  She opted to stay in our guest room for a little while until my dad got a few procedures done, and we were certainly glad to have her around. 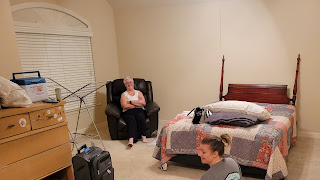 Monday - The older two girls had variety dress week, meaning they were allowed to bend the school dress code for a few days.  For day one they were allowed to wear sports jerseys, and while Curly was able to wear her basketball jersey from the season she completed earlier in the semester, Girly opted to go in with a few classmates on matching eSports jerseys, complete with gamer tags as names on the back.  I guess Houston sports franchises aren't doing well enough to garner the attention of the younger crowd!  At the end of the day, Girly had her usual cello/driving lesson combo, and is getting close to finishing all of her requirements to get her driver's license in just a few months. 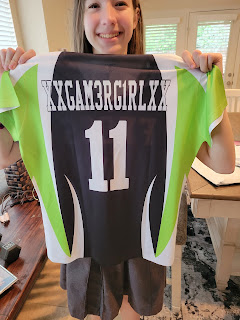 Tuesday - Crazy hat/hair day for elementary contrasted with fiesta day for high school on day two of variety dress week.  Curly went with unbalanced pigtails, but I think the big story was how neither of my daughters took the opportunity to wear the sombrero that has been floating around our old house for quite a while.  What a pity!  Whirly and I hit the martial arts mat for some training, and she completed her requirements to earn a black stripe for her orange belt (a week early).  After school, Curly had a clarinet lesson and Girly went with her boyfriend to a varsity baseball game, so we got some Chinese takeout.  With my mom spending most of each day at the hospital with my dad, we always try to have a little extra food leftover in case she doesn't get anything until late at night when she returns to our house.  That said, I don't think she cares for most oriental food so this might not have really appealed to her.  Maybe that's why Whirly and I (the primary leftover eaters in our house) had a good two days' worth of lunches after this particular dinner.
Wednesday - Career dress day led Girly to wear mom's teacher shirt, mom's sweater, and take mom's teacher mug.  Curly tried to come up with a few ideas, including zookeeper, but ultimately scrapped those outfits and just wore her usual school uniform.  My dad had the first of two surgical procedures to get him fixed up and on the road to recovery, and apparently the doctors thought it went well.  After I picked up the girls from school we all ate pizza before they all headed off to church.  They didn't stick around too late, however, which allowed me to take the older two to the store to buy some things for Thursday's theme, which was...
Thursday - Camo day for elementary and Florida day for high school!  Judging by the school's social media feeds, I think most of the older kids were going more for a hillbilly look.  I was thinking about trying to get Whirly a few fun dress-up days, but since she typically determines her own fashion statement on a daily basis I didn't do much in that regard.  Maybe we'll just save it for the last week of school.  After martial arts and a quick wrap of the school day, I started prepping a cheeseburger tater tot casserole for dinner.  Mrs. Geo handled the finishing touches and the baking while I drove Curly over to her piano lesson, and then we all settled down for some movie time before bed.
Friday - While the rest of the grades wore school t-shirts, the high school kids got to wear anything in their class colors (sophomores are blue).  Mrs. Geographist only had a half-day at school so she was home right after lunch, but Whirly had already torn through her school day by that point, including three tests to wrap up the week strong.  Girly spent a little bit of time at the boyfriend's house once again but made it a shorter trip before coming home and joining us for some lasagna.  I worked to bundle up some of the branches I had trimmed back after the big freeze damaged several of the plants at our new house, then got some of my mom's things packed up as she was heading back to her home for the night, and finally everyone attempted to get some sleep before an early morning.
Saturday - Super busy day!  The alarm went off at 5:15 am and I stumbled out of bed to drop Girly off at school for a music trip to San Antonio.  After a year of not being able to perform in a live setting, the band, orchestra, and choir participated in a music festival at their local theme park, and then got to spend the rest of the day having some fun.  Whirly had curriculum training at the martial arts school soon after, but we did have time to snag some doughnuts before she got onto the mat.  I brought some home to Curly and Mrs. Geo, who were getting ready to head off to the final Bible Drill competition of the year.  I was able to get cleaned up and, after picking up Whirly, raced over to church in time to watch.  Not a single one of the kids from our church missed more than two of the calls, meaning they each received a Superior ranking - that NEVER happens, and was incredible considering all that they had overcome simply getting to this point!  Mrs. Geographist decided to grab lunch with several of the other moms who are in her D group, and I hung out at the kids table across the restaurant.  As we finished eating and headed outside to their patio to enjoy the beautiful weather, one of the band moms who had traveled to San Antonio started live streaming the performed songs, so we were able to check out how they did.  Before heading back home we made one more stop to participate in a drive-thru baby shower for the church's kids ministry assistant.  Everyone finally had a chance to rest and relax for a while once we were home, and we even got to enjoy a family walk to the park before the sun went down.  Except for Girly, that is, whose bus didn't arrive back at the school until shortly before 1 am.  Let's just say that sleep came quickly as soon as we were all able to reach our beds! 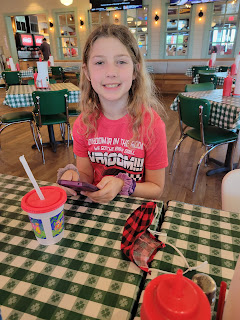 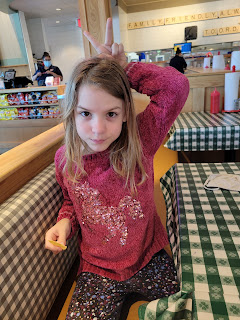 Let's finish April strong and head off towards summer!