I find it hard to believe that we've been at this for 35 weeks already, but here we are with just six weeks of school left.  There are no more holidays, however, so from here on out it's a push all the way to the finish line.  Whether it turns into a race or a grind remains to be seen!

Sunday - What an amazing Resurrection Day at church!  For the first time in over a year, our worship service felt like the congregation we used to know every week.  We're definitely thankful for all the progress that has been made in order to bring the church back together in the building.  Even our 5th grade Bible study was closer to normal, with the kids being able to move around our room more freely during activities.  After church we headed up to my in-laws' house for a family lunch, after which we ran around watching the kids collect all of those brightly-colored, candy-filled eggs. 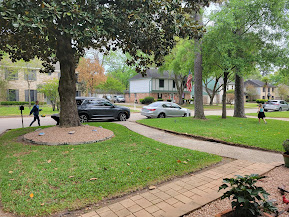 Monday - The adults were back to work, but none of the kids were back in school.  So while Mrs. Geographist left early to be in class and I logged in to work virtually, the girls did a bit of relaxing and unpacking (and I'll just let the reader guess on which they did the most of).  Each day I've tried to get a few boxes unpacked, and the bulk of my effort to kick off the week was focused on the office since that's where I spent most of my day.  Girly did take some time to go over to her boyfriend's house for a bit before leaving for her weekly cello lesson - her first time to drive there from the new house.

Tuesday - Back to school for all three kiddos after their final long weekend of the school year, and this week was a bit different for Curly as she had three days of standardized testing.  Their school doesn't believe in the kind of high stakes tests that other programs frequently employ, but they want the students to be able to gauge their progress against peers each year, and I also appreciate that the kids get the experience of doing that style of testing that will benefit them later during college entry exams.  Whirly had to deal with me having two separate work calls during the day, one on either side of our martial arts lesson, so the day was a little slow to develop.  Homeschooling provides a lot of flexibility, but sometimes the work can slip a little when other demands are allowed to cause interruptions.  That was the case today, which resulted in a pair of subjects dragging past when Mrs. Geo got home.  But that seemed to be ok with both of them, as the mother-daughter tandem sat in the living room to work through a reading assignment while the older girls handled homework, music (including a clarinet lesson for Curly), and a bit of turtle tank cleaning. 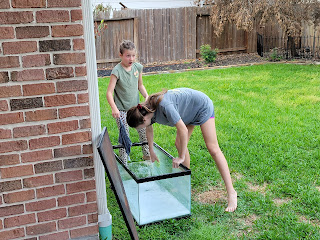 Wednesday - By this point we'd successfully emptied a high percentage of the boxes from the move.  Some of them have been flattened to be given away, some are heading to the curb on trash day, and some will be reused during quick trips to the old place to pick up whatever got left behind.  Whirly started the day playing catch-up on a the activity pages for the reading assignments she'd done with mom the prior evening.  As with most Wednesdays dinner consisted of pizza, although this time it was delivery rather than the usual carry-out.  After all the girls left for midweek activities at church I went to the old house to pick up another load of miscellaneous items before returning home to take out the trash.
Thursday - Mrs. Geographist had an early afternoon interview at a nearby private school, so she only worked half a day and was home by the time Whirly and I left for our lunchtime martial arts class.  Once we got home, a technician from the alarm company arrived and began the process of installing our new security system, which took the bulk of the afternoon.  We had to play some tag-team to get everything done, including picking up the older girls from school and getting Curly to her piano lesson, but by the time folks started to get hungry we hadn't actually done anything about getting dinner together.  This was more of an issue than usual, as Girly had surprised me while I was waiting in car line at the school by telling us her boyfriend would be coming home with her, so we had an extra guest hanging around the house.  It was boneless Thursday at the local wings restaurant, however, so we placed an order that arrived shortly before the alarm setup was completed.  Problem solved!

Friday - Typically the end of the week is lighter than other days, but with Monday off I had given Whirly a very full day to make up for the missing day.  Despite all the week's distractions, however, she made a strong push and finished well.  Once all of the girls got home I threw together some baked chicken for dinner, and then because I'd gotten a call that some of the furniture we'd purchased for the new place had an extended delay, Mrs. Geographist and I decided to swing by the store to see what our options would be.  Along the way we grabbed a few more items from the old house and then had a quick ice cream date, which made furniture browsing that much nicer.  We finally decided on a replacement for the delayed table and chairs, which was very similar to the original set but over $200 cheaper.  That's considered a win, right?

Saturday - Whirly had power training at martial arts, which happens every three belts when they move to a new phase.  She and I are still considered beginners in Phase 1, but her next belt graduation will move her into Phase 2.  Each phase change involves a set of requirements involving physical and mental testing, so they have extra days of power training and curriculum training.  Today's effort involved running - you have to run a mile for each phase you've completed, and every mile must eventually be completed in under 10 minutes (meaning by the time you reach black belt candidacy, you're expected to run 3 miles in 30 minutes).  I was impressed with how well my little champion handled her business, and while she's got a lot of time to shave off before she qualifies she was able to complete her very first mile.  Once we got home I took the entire crew for a walk to measure our new neighborhood's walking path so that we could both start training a bit more intelligently towards reaching that goal.  I'm not necessarily all that thrilled about starting my power training right in the middle of a Texas summer, let me assure you!  In the afternoon, Girly spent a few more hours at her boyfriend's house while the rest of us went to pick up our new furniture.  Since we had a little extra money to play with we decided to pick up a couple rugs for our bedroom and the breakfast area.  After  I finished assembling the new table out the garage we finally moved it all into the house, which is finally starting to feel like a home. 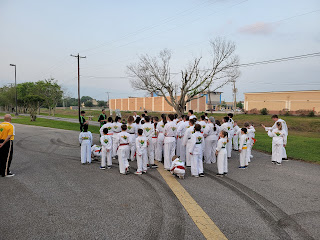 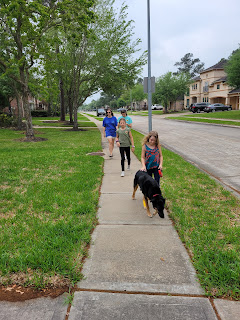