Diary of a Homeschool Dad - Week 34

Lots of changes during this update, which was truly a red-letter week!

Sunday - Palm Sunday at church was a little different this year, as the children typically usher us all into worship waving palm branches and singing.  But you know what?  At least we were in church this time, unlike last year, and that was a very good thing.  During the evening, we were all back at church so that we could watch Curly and Whirly participate in their Bible Drill church competition.  Both had improvements over their practice round from the week before Spring Break, and every one of the kids did a great job!  It was definitely a tough semester to handle, but all of our 4th and 5th graders will be advancing to their next round - the association level.  After all the kids wrapped up, Mrs. Geographist got to hang out with several of her friends that make up a discipleship group, so it was just a great day all around. 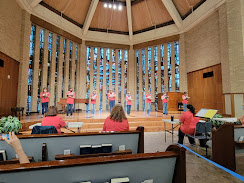 Monday - Back to school, back to work.  Whirly continued to focus on her math skills to avoid making some of the simple mistakes that have plagued her on recent graded work.  Her Bible lessons seem to have worked out well for timing, as she's studying about the resurrection during Holy Week.  With movers coming at the end of the week our goal has been to eat up as much food that is in the house, so I baked up a ham with some beans and croissants.  Girly drove over to her cello lesson once again while the rest of the girls got some work done on packing back at the house.  The filled boxes piling up near the front door definitely make it seem like a change is coming...which is exciting to everyone except the neurotic dog who has seemed very stressed about what's happening.

Tuesday - With a extra day of class on the calendar after belt graduations have wrapped up, we had a free day to learn something fun in martial arts.  Our black belt instructors decided to focus on some new kicking techniques, so we spent the day learning how to execute a jump-spin-kick.  As the head instructor correctly pointed out, the kids were more interested in the jump while the adults focused more on the landing.  Heading into a long weekend, it always seems that the schedule has more tests than usual, and Whirly had the first of a series of tests today in Heritage Studies - a chapter on the time of presidents John Quincy Adams, Andrew Jackson, and Martin Van Buren.  It's interesting going through a lesson on America's history dealing with the Indian nations and the rise of the abolitionist movement as we deal with repercussions of those decisions in the 21st century.  After picking up the girls from school, Curly logged on to her virtual clarinet lesson while I started cooking up the leftover ham into a tater tot casserole.  That would end up being the last home-cooked dinner we had together at the old house.

Wednesday - The test Whirly faced this time was math, and she knocked it out of the park.  All of the extra work on her higher multiplication tables (6-9) and attention to detail has seemingly paid off, so now she'll be able to move on to simple geometry.  Mrs. Geo got pizza for everyone so they could have a quick turnaround after school in order to make it across town for midweek church activities.  I handled some work requests at home and continued the effort toward getting the rest of the house packed up, including the pots and pans which were no longer going to be needed before the movers arrived.

Thursday - Happy April Fool's Day!  I tried to get Whirly to wear her birthday black belt to the dojo as her little prank, but she refused.  Probably a smart thing - the other/real black belts may have made her do pushups or some other exercise as punishment.  We worked on a few new kicks, although there was no jumping this time around.  This actually marks six months since Whirly began her martial arts journey, and I really love the results she's seen.  Back home she wrapped up her week with spelling and English tests, and I picked up the older two girls from school to get the long weekend started.  With most of our food gone and all of the kitchen implements boxed, we hit the local TexMex restaurant for dinner before heading home to wrap up as much packing as possible.

Friday - It was an early morning as we had to get up and start taking the beds apart before the movers arrived at 7 am.  They showed up with two teams and two trucks, and pretty much worked all day without much of a break the entire time.  We apparently have a lot of stuff!  Mrs. Geo took the younger two girls to the new house to allow the internet guy to come set us up, and her parents dropped by to see the inside of the house for the first time before we filled it up.  Once they finished everything up we were able to log in to our church's live stream of Good Friday services, which we watched until I disconnected the internet router while fiddling around with furniture placement.  Once again we ate out, although it was a bit more out of exhaustion than celebration, before coming back to have our first night's sleep in the new home. 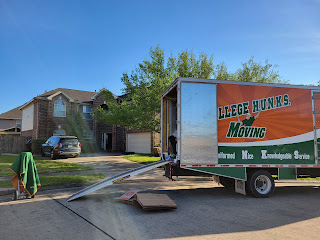 Saturday - We kicked off the day by trying out a new-to-us doughnut spot, because it seems you're always going to need to know the best quick, cheap breakfast place close to your house.  Then we drove out to Beaumont where, for the first time since his major surgery on February 2, I was able to see my dad in person.  He's been in the hospital for quite a while, and Covid-era visitation regulations being what they are, I haven't been able to go into his room until now.  My mom went to lunch with the rest of my crew and handed out some Easter gifts to the girls, while I had a good chat back at the hospital.  I can't tell you how wonderful it was, because honestly the last time I saw him we all thought it might well be the last time this side of eternity.  Afterwards, we headed back to the Houston area so that Girly could have a group cello lesson to prepare for an upcoming recital.  We snagged some groceries, dropped them off at the house, and once again went to a restaurant instead of cooking at home.  On the way back home we dropped by the old house to pick up some remaining items, including a few cooking bowls and utensils for Mrs. Geographist to make some Easter dessert. 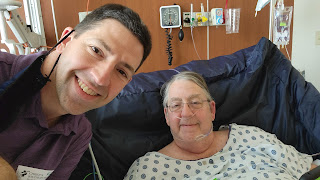 I hope everyone had a wonderful Holy Week - next week I'll recap Easter and look forward to settling into the new place!