Diary of a Homeschool Dad - Week 29

The warmth has returned to the Houston area, and with it a semblance of normal as everything started opening back up.  I hope everyone out there is also getting back into their own particular groove!

Sunday - Church wasn't very full coming off the big freeze.  Some of the classrooms had sustained damage, so all activities other than the actual worship service were canceled for the day.  The exciting news back home came in the late afternoon when the boil notice in our town finally got lifted.  I ran the faucets, replaced the water filter, and cranked up the ice maker again.  Everyone else in the house started going through clothes and closets to figure out what should get thrown out or donated prior to our next move.

Monday - Something new and different on a Monday morning, and that is exercise.  Mrs. Geographist has been going to early-morning cross kick workouts and I decided to join her.  The grand master of the martial arts studio runs the class, so I was able to get some personal instruction on some of my techniques that I'll need to know as I advance through my belts.  Once home, we kinda just watched our older two girls ready for school as we rehydrated at the breakfast table.  I dropped Girly and Curly off for their first day on campus in nine days, and then took a check by the house we're trying to buy (our option fee).  Whirly got cranking back at her school work with mom as I logged in to my office machine to get some work done.  At the end of the day I got to ride to Girly's cello lesson and back while she practiced her driving skills.

Tuesday - We started off the day swinging our earnest money by the title company's office, which makes the whole homebuying experience finally feel real.  It didn't take Whirly long to start taking tests again, with a math grade on her second day back into things.  The nice thing about homeschooling is that, when the kid shows that she needs more time on a subject we can slow down.  Conversely, if she's grasping anything easily we can forge ahead more quickly.  As we've been forging ahead into the higher side of times tables, it was definitely more of a slow down week.  She did enjoy getting back into martial arts, although I noticed that consecutive days of working out was starting to cause a bit of soreness.  After the older girls got home from school I had to swing by the music store for some supplies, as Curly had gotten down to a single usable reed.  Unfortunately, I got them to her just before her virtual lesson was about to begin, and apparently the lack of time to break them in lends itself to some extra squeakiness as the first few minutes of her lesson were somewhat uncomfortable to overhear.

Wednesday - It was another early wakeup call, as Mrs. Geo and I hit the martial arts studio for a predawn workout.  Three straight days of working out definitely called for a bit of a soak to ease some of those muscles!  After that, it was more school, more work, and more cleaning in our household.  The housing purchase process continued to move forward, and more items continue to find their way to the curb as we reduce what will eventually get boxed and moved.  All of the girls got to return to their church midweek activities while I cranked away on requests from my office.  It's important to continue doing good work while on the job!

Thursday - Mrs. Geographist was back in the classroom as a sub, so Whirly and I got to spend the day together in the home office.  The last week of the month at martial arts is always either dedicated to a stripe test or a belt test.  Students can earn a new belt once every quarter, and in the two months between belt advancement we can earn a stripe on our existing belt that represents one of the skills of a black belt.  This month's focus was on growth and accuracy, represented by a green stripe.  Whirly and I both had successful tests, and should now be on our way to moving up to a new belt in March!  Mrs. Geo and I intended to grab German food for dinner, but a schedule mix-up for Girly required a last-second change of plans.  She ended up at a baseball game with a certain "fellow" and the rest of us opted for Italian cuisine instead.  At least the dessert was top notch! 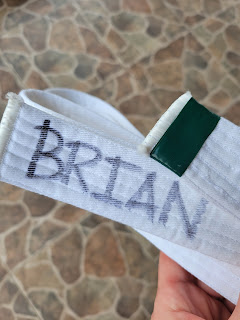 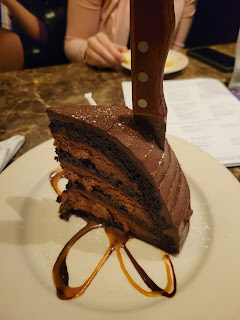 Friday - I opted not to attempt pushing my workout streak to five days, deciding to take the weekend to allow my body a bit of rest and recuperation.  Girly and Curly each had the chance to dress up for Go Texan Day at school, which is a tradition we all love around here.  Whirly wrapped up her school week early with mom, who had taken the day off to participate in our home inspection review.  Once we had a chance to step through all of the findings and determine the next course of action, our realtor gave us time to browse around the house once again.  Only Curly had been with us when we first looked at the home, and now Whirly has had her chance.  I guess Girly will get her chance eventually!  After all was said and done, we wrapped up the week by finally getting over to our local German restaurant for some good eats. 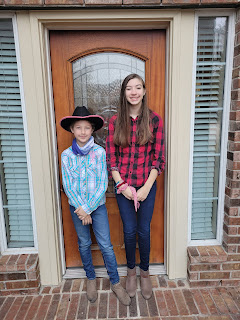 Saturday - My dad finally got transferred from his original hospital to a new facility that specializes in wound care.  We had hoped that he would finally get a visit with a neurosurgeon, but apparently the previous hospital provided bad information to my mom and it doesn't appear they will be able to do that without another temporary transfer.  In spite of that annoyance, we're optimistic that he's in a much better situation with staff that seem to be prepared to facilitate the best course of action for my dad.  Now that our usual Saturday activities have wrapped up for the time being, Mrs. Geo wanted to go check out some furniture for our new place.  We browsed several local stores for the rooms we eventually want to fill, purchased a few small items that we can use in the meanwhile, and the younger two girls even used some of their money on beanbag chairs and pillows.  Everyone seemed to enjoy their retail therapy!
It was nice getting back into a routine, and now only two weeks of school and work are left before Spring Break - can you believe it?