Diary of a Homeschool Dad - Week 24

This week was marked by friendly reunions, national observances, and family heartache.  On a personal note, I've been reading the book of Job during Bible study and I found some of the words especially applicable to life right now.

Sunday - Our church schedule was back to normal this week, and once we wrapped up it was time to catch up with a friend.  A former co-worker of mine is a long-time musician and we had the opportunity to have brunch at a restaurant where his group was playing.  It was good to see him after a few months, and Mrs. Geographist enjoys his blend of music that is heavy on Texas country and 90s pop.  Oh, and the food was pretty good as well.  After getting home and relaxing for a bit, Mrs. Geo took Girly back to church for youth choir while I stayed home with Curly and Whirly to do Bible Drill.  Hopefully our virtual lessons can go back to being in-person when the calendar rolls over to February!

Monday - The observance of Martin Luther King, Jr. Day meant no work or school for our crew, and we took advantage of the time to head up to visit my sister-in-law and her husband.  We'd all planned to take a cruise together last July, but since all sailings were canceled for a while we were interested in rescheduling a time to all get away together.  Mrs. Geographist and her sister put their heads together, solicited a bit of input from the gentlemen in the room, and booked our new trip.  I was also fortunate enough to catch up with another awesome friend and coworker.  He and his wife met up with three of us (minus Curly and Whirly, who stayed at their aunt and uncle's house) and shot the breeze for a couple of hours.  Unfortunately we had to call it quits a little early, as I had to get Girly to a cello lesson and we had to make sure Curly was logged into her virtual clarinet lesson.

Tuesday - I'd say the subject that gets short-changed the most on weeks with a holiday has to be spelling.  Typically we introduce a word list on Monday, she has daily worksheets and a pre-test on Wednesday to check progress, and then a final test on Friday.  A day off just messes that up, but to her credit Whirly has seemed to handle the many partial weeks quite well.  This was scheduled to be a practice day for Curly's basketball team, but with one player testing positive for Covid, along with two other players and the head coach having to quarantine, the league decided to shut their squad down for two weeks.  Curly heard about her friend getting sick and didn't feel well herself, so I kept her home.  Apparently it was just empathy (or she had a Ferris Buehler moment) because she didn't seem to suffer any ill effects after big sis and mom headed out the door.  With the martial arts focus of the month being "Power", Whirly has even started taking extra time during her day to practice things like pushups and punching.  She may even have a few muscles growing! 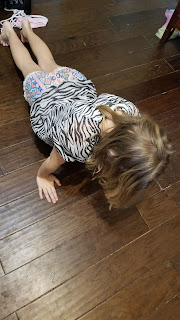 Wednesday - It was Inauguration Day in America, so we got a new president.  In other news the Astros officially bid farewell to local favorite George Springer, as the local team decided they couldn't afford him and he headed north of the border with his new contract.  It was all bound to happen eventually, but it still stings a bit when reality finally hits.  Mrs. Geo was home for the day, so Whirly once again got to hang out with her favorite substitute teacher.  I spent some of my time between job requests reconfiguring my (admittedly very small) stock portfolio, selling off some small shares in companies that aren't handling this year's economy very well and trying to find something else to buy instead.  With midweek activities still on hiatus at church, Mrs. Geo and I hit the local grocery store together - who knew that would be a nice getaway to just walk and talk? - and picked up some pizza for dinner on the way back home.

Thursday - This particular day started off normally, with Girly and Curly heading to school while Mrs. Geo and Whirly got kicked off with their usual school activities.  At lunchtime, however, we got a message that my aunt in Florida had sustained a fall and was being rushed to a hospital.  For the rest of the day texts were bouncing around between members of my mom's side of the family across several states to find out what had happened, and what her prognosis would be.  Realizing the seriousness of the situation, we all started asking our friends to join us in prayer.  At the house we continued trying to have "life as usual", including school and work.  Whirly had martial arts and Curly had her usual piano lesson.  Mrs. Geographist was excited about the arrival of her new laptop, and after family taco night she worked on getting it set up in advance of the evening's disciple group meetings. 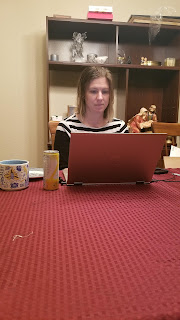 Friday - We got the news pretty early in the day that my aunt was not going to survive the burst aneurysm that had led to her coma.  It was a jarring moment, realizing we'd just lost someone who seemed to be doing so well the last time we saw her (which was six months ago at my uncle's funeral).  Mrs. Geo had gone to the girls' school to teach, so I was home with Whirly finishing up the remainder of her assignments.  We had some activities, including a science experiment focused on the effects of temperature on water.  We froze a glass of water to see it expand, then poured hot water around the edges to loosen the large block of ice in order to transfer it over to a sauce pan, which we then used to boil it all away to vapor.  She seems to really enjoy the hands-on aspect of science.  Girly had a meeting with her color guard group at school, but unfortunately it was just to alert the girls that their director was stepping down and that they weren't likely to have a spring performance season.  After dinner, my grandmother called me from Kentucky to express her condolences (although she thought she was calling my dad, but pressed the wrong number on the group text).  As soon as I hung up with her, I received texts from my parents saying they'd been in an auto accident on their trip to Florida to be with the rest of the family.  Apparently someone was travelling well in excess of the speed limit at night with no headlights when they struck my parents' car from behind, shattering their rear window, and rendering the vehicle undriveable and my parents quite shaken up.  Fortunately they got a significant amount of help from police and wrecker services, and were able to find a nearby hotel to spend the night.

Saturday - The morning was filled with trying to communicate with my parents about their plans.  They were able to find a rental car in a nearby town, experienced their first rideshare, and managed to get all of their belongings out of the wrecked vehicle before noon, at which point they opted to return home rather than continue their trip.  We headed out for lunch, except for Girly who opted to remain home to clean her room, and swung by a local craft store where I purchased a detail knife to trim the edges off some art I had in order to fit them into new frames.  With no basketball games for Curly our only activity ended up being a group cello lesson for Girly.  On the way home, I got a text from the dad of her boyfriend, asking if they could take her out to dinner with their crew.  The rest of us got some local BBQ and peach cobbler, and settled in to watch old Doogie Howser, MD reruns. 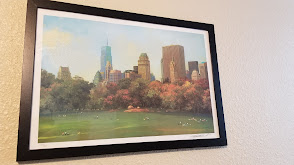 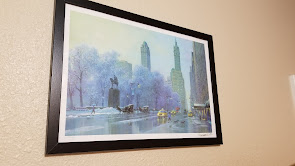 We're approaching next week with a bit of uncertainty, so it remains to be seen how much flexibility we'll need over the coming days.  We will be weeping with those who weep, however, and hopefully are able to provide a bit of comfort to someone who needs it. 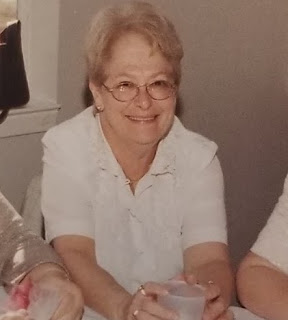