Diary of a Homeschool Dad: Week 21

Happy New Year!  I must have planned this out pretty well for my 21st week of the homeschool diary portion of the page to coincide with the start of '21, right?  Nope, just a happy coincidence.  I hope everyone reading this page had a great break and is ready to kick off an exciting year, full of optimism and promise.

Sunday - Mrs. Geographist and I were on the road, heading out to the Texas Hill Country for a little anniversary vacation.  She got us reservations at a nice hillside BBQ spot in Austin for lunch, and we generally spent the day meandering up and down I-35, reminiscing about my college days in San Marcos, TX and our first few months of marriage there.  We drove past our first home together, a tiny duplex on the northern edge of town, as well as an apartment complex where we'd both lived.  The whole area has changed quite a bit, but there were plenty of memories.  The shopping is still a highlight - two outlet malls stand side-by-side, and we certainly burned through some of our Christmas gift cards and cash!  Finally we headed up the road to our hotel in Marble Falls, where we had spent our fifth anniversary. 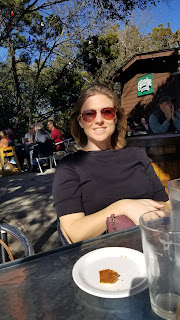 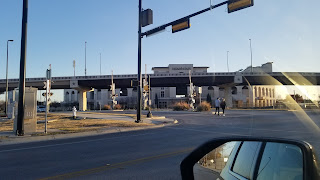 Monday - This is our official anniversary: 18 years and going strong!  The little cafe where we'd hoped to have breakfast was closed for the week, but we found a cute little coffee shop for her and a Whataburger for me.  On our way out of town, we saw an exotic zoo along the side of the road and decided to check it out.  Impulsive decisions are frequently a hallmark of our meandering vacation style.  It turned out to be quite a little adventure, with such critters as deer, rams, buffalo, and llamas crowding around our car in hopes that they'd be fed.  The camel was the most memorable, however, as the big guy stuck his neck in my window, and reached across the vehicle to eat all of the food we had left (paper bag included!).  An auto detail will definitely be in our future to clean this mess, but it was worth it.  We then rolled into Fredericksburg, an old German town that helps give the otherwise-Mexican influence of the Hill Country its uniquely charming cultural blend.  We toured a vineyard, although I may have been the only one geeking out about the science of the whole thing, and enjoyed their on-site restaurant.  Finally we got into the shopping portion of the town and spent the rest of the afternoon moseying up and down Main St. before having some German-Austrian cuisine for dinner. 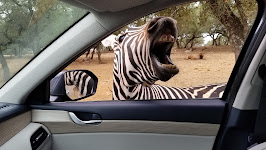 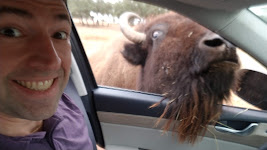 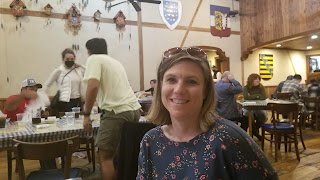 Tuesday - We spent our second night in Boerne (BUR-nee) and snagged breakfast at a local cafe before hitting the road back towards home.  We met my dad on the western side of Houston to pick up Curly for her second basketball practice of the preseason.  Reality being what it is these days, we weren't allowed in the gym with them, so we hit the local bookstore to bide our time and munch on a snack to tie us over to dinner.  It was good to get away and just be a couple, but it's also good to be back home with our girls.
Wednesday - This was our big chance to get a few things done before yet another trip out of the house.  Mrs. Geo decided to take advantage of the spa gift card from the girls and got a massage and pedicure.  I took care of some things around the house - meaning I took down Christmas decorations and started trying to put things away - and also had the momentous occasion to take Girly to a boy's house (what!!) to hang out with his family for a while.  I'm happy to say that she made a good impression, and this kid's parents and I had a nice chat (we've met before, but this was obviously a bit of a new level to our interactions).  Having either eaten out or had big Christmas meals for the past week, it was nice to have a simple beef stew for dinner.
Thursday - For the past several New Years Eve celebrations, we've been going back and forth between our house and Mrs. Geographist's sister's house.  This year it was our turn to travel, so we packed up and headed their way.  My brother-in-law and I had planned to run a James Bond marathon (he has the entire collection), just like we'd done a Marvel marathon the year before.  Well, our best-laid plans didn't quite pan out, as we wound up watching just a single 007 feature while mostly catching up on the last few episodes of Cobra Kai's second season.  We played some games, of both the card and video variety, and watched just enough of the network shows to know we were glad not to see more.  Everybody but Kim's sister and Whirly made it until midnight, and we all agreed we were happy to see everyone move on to a new year.
Friday - For our first morning of 2021, we had pigs in a blanket and a fruit tray - that's a good way to start the year off right, don't you think?  The third season of Cobra Kai was released in its entirety, so we all got comfortable and binged the entire thing.  We did have to stop three episodes from the end, however, to think about lunch.  Our first option turned out to be closed for the holiday, but fortunately our second choice was open.  While wrapping our teeth around some food we watched football and discussed where we thought the TV series was heading in the last few episodes.  Then we went back to their house to see if we were right!  Finally we packed everything up, played one final game together, and headed home.
Saturday - The days have effectively run together, so it seems like we've had a few Saturdays in a row.  Mrs. Geo was up early to go meet her discipleship group from church for breakfast, and the girls and I got a slow start to the day before starting to clean house.  After mom got home, we started making the rounds to let the girls start spending some of their Christmas money and gift cards.  Books and clothes were the primary targets this time around, followed by dinner at one of our many local TexMex restaurants.  It was a great week, and now it's time to start inching our way back into a routine for the spring semester!