Diary of a Homeschool Dad: Week 19

We've reached exam week, so everything on the schedule has been getting topsy-turvy right as we gear up for the much-anticipated Christmas break.  It wasn't just the schedule that was in upheaval, however, as we had a few emotionally tough times.  But we were also treated to several end-of-semester special events, helping to make this a memorable time for good reasons as well.

Sunday - We kicked off the week exactly how we finished the prior one: playing a Christmas concert.  Well, actually two of them (for two different services), and the second one gave me the chance to play the same solo that Girly had handled so well on Saturday night.  Would you believe my parents stuck around in a nearby hotel just to catch both solos?  After church was over, we had a nice lunch with Mrs. Geographist's side of the family but had to discuss the health of the family matriarch - Mrs. Geo's grandmother had a heart attack the prior night and was taken from her memory care facility to the hospital.  We then battled the rain to get back home for some rest and, for those who had exams coming up, a proper amount of studying.  Unfortunately we had a terrible pet event as one of Girly's two turtles succumbed to injuries sustained during an attack by her other turtle a few days prior.  After consoling my weeping daughter, I then had to take care of the poor little guy - burying a turtle in the soggy back yard is not how I pictured my evening going.

Monday - On a much brighter note, the last week of school offers the kids a few opportunities to get festive (not to mention break the monotony by relaxing the uniform dress code).  For some reason, my oldest kid really likes my Bob Ross ugly sweater, so she stole it for the day.  This was the only "normal" school day from a scheduling perspective, as the days when high school has final exams only go until lunchtime.  Curly still has to be at school for the entire day until Friday, so that means two trips through car line for yours truly.  And all the while, Whirly has to keep plugging away to make sure she can wrap up all of her subjects as well.  After school, it was off to cello lessons for Girly and to the barber for me. 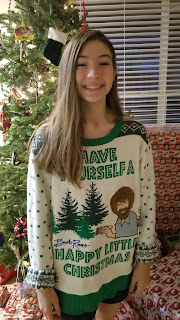 Tuesday - Curly was sporting Christmas socks for her special dress-up day, but I was more surprised that she had a matching pair.  Who would've thought that mismatched socks would not only be acceptable but actually preferred by kids these days?  After Girly finished up her abbreviated day, Whirly went to martial arts for her final lessons before belt graduation day.  The kids break boards as part of their advancement to a new belt color, so the lesson was on proper form and technique.  Kiddo did just fine with the practice boards!  Once school was out for Curly, she had her weekly virtual clarinet lesson before we all headed out to eat some local TexMex for dinner. 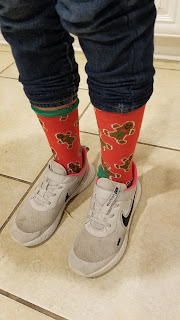 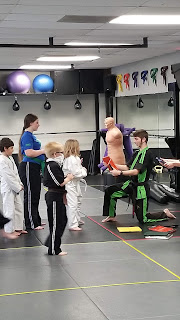 Wednesday - I have two considerations for Whirly's school work as we approach a gap of two-plus weeks in her lessons.  First, I can't really have her taking tests in all of her subjects on the same day to wrap up the week.  Second, it also doesn't make sense to start a lot of new material after a test that she's prone to forget quickly while focusing on Christmas and New Year's.  So as she finishes a test on a day like Wednesday, for instance, that's the end of her work on that subject for the rest of the week.  Consequently, the number of subjects she works on each day shrinks.  That should mean she's finishing more quickly each day, but this entire week has included math lessons on how to read clocks, and the extra work that Whirly needed on that topic really chewed into what should have been more free time.  No midweek activities meant everybody was home for the evening, which gave me plenty of time to cook up some breaded chicken and scalloped potatoes while Mrs. Geo got some shopping done for her classroom.  She and I wrapped up the evening by taking Whirly down to the bookstore to pick up some good reading material.

Thursday - Another day to wear something festive at the elementary school meant Curly wore the Christmas cat ear headband that her grandparents gave her this year.  I thought it looked so appropriate with the tongue sticking out on her gaiter.  This day was even more bizarre as Girly only had a single test to take, and was therefore home from school before Whirly was even really getting her day going.  A martial arts lesson bit its usual chunk out of the day during lunchtime, but it's definitely a good reason to get out of the house.  I've noticed that not only is she getting stronger, but after several months she's finally starting to relate to her classmates more (playing with the other white belts before class starts, finally calling the other kids by name, etc.) - all while continuing to improve in discipline and respect at home.  Zero complaints!  After Curly finally got home, and it did seem like it was super late, I took her to her piano lesson.  We all met for pizza at the mall, after which I took Curly shopping for some friend gifts for the final day in class.

Friday - It was an earlier morning than usual for two of us, as Whirly had a follow-up EEG to see how her medicine was doing at its current dosage level.  A nap for kiddo was definitely in the cards after that.  The older two both had short days, although for some reason they still got released an hour apart...meaning I still had two trips through pickup line.  We were planning to meet Mrs. Geographist for lunch but she took a bit longer getting out of class and the local chicken sandwich shop's parking lot was an absolute zoo.  So we took our order to-go, and ate at home.  Everyone seemed eager to show off their goodie bags from the last day of school, and my office even sent me a package with several treats.  Poor Whirly was the only one who didn't have new candy or gifts to enjoy, and her kids meal surprise wasn't even the ice cream she'd requested!  She shrugged it off, however, and just enjoyed the day with her sisters home - although there was a little bit of flopping on the dog thrown in for good measure.  The day wrapped up with a piano recital for Curly, which included a Christmas pajama/sweater/outfit contest.  We didn't win anything, but it was fun to dress down and enjoy seeing her perform so well. 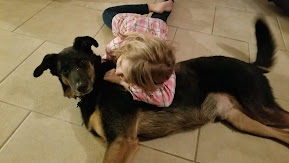 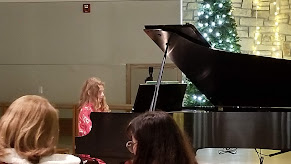 Saturday - We no longer have a white belt in our home, as Whirly graduated to her yellow belt during a late morning virtual ceremony.  I don't know that her big sisters were all that impressed with the progress that she had made until the very end when she easily broke her board on the first shot, and suddenly Whirly seemed to have a little extra street cred in the house.  Mrs. Geographist decided to go shopping for some things to prepare for Christmas baking, but during her trip she got word that her grandmother, who had been moved to hospice, could actually have a few visitors.  We agreed that it was important for her to go see her as early as possible, so she took off for the north side of town.  I decided that it was time for the girls to shop for each other, so I took them one-by-one to the store to do some shopping.  They did such an incredible job, each one taking time to think about what their sisters would like best and hunting down just the right items.  Girly had a party with some of the band kids, including a few from last year who had graduated and gone on to college this semester.  The younger two girls and I met up with mom as she was returning from visiting.  As we were about to sit down at the restaurant, however, she got the call that her grandmother had passed away.  It really was a blessing that Mrs. Geo was able to be with her one last time.  Her grandma leaves a big legacy of loving her family and being a huge part of her church.  She'll be missed. 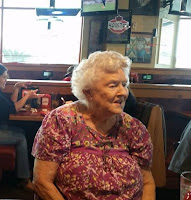