Diary of a Homeschool Dad: Week 18

As school begins to wind down, Christmas starts to heat up.  And in Texas, that's not always a figure of speech - it's actually quite warm on most days!

Sunday - It was a strange church service for this dad, as all my girls went to sit with friends during church.  Girly has been doing this for a while now, but Curly spotted a pair of girls from her class whose parents typically sit along the same pew, and asked if she could sit with them.  That was fine by me, but then Whirly piped up and wanted to sit with one of the girls' little brother.  It was a bit of a stretch, but I went along with it to see how everyone would handle themselves.  It wasn't awful, but I think the youngest kiddo has a few more wiggles before we try that experiment again (or at least a longer attention span).  Mrs. Geographist took the teaching reins for our 5th grade class, and it was nice to sit back and watch her do her thing.  I think the kids enjoyed the change of pace.

Monday - I've been teaching Whirly from my own devotional this year, and my plan has worked out perfectly.  For the next-to-last week of the first half of school we came to the end of the Old Testament, and guess what that means for the final week before Christmas break!  (Side note: if you're interested in starting a new devotional yourself during the new year, check out the link beneath the Contact Form - it's along the left side of the page if you're viewing this on a desktop or within the upper-left menu on phones and tablets.)  Given how few days we have left, I'm starting to gauge what she's going to be able to finish prior to taking some time off just to avoid giving her some new concepts that will grow stale before we get back to learning in 2021.  After everyone was home and fed, Girly was back to her normal cello lesson time so we headed that way.

Tuesday - I'm beginning to think we have a lot of music in this house.  Not as much as some families, mind you, but enough to keep things humming.  This is typically the week of December where we're all scrambling to get the final touches on various performances, but it seems this year we're spreading some things out and just missing out on others.  All of the kids school performances, despite the in-person nature of classes throughout the semester, were recorded and shared virtually this year.  Girly's youth orchestra season was canceled.  We added Curly's piano lessons to the mix, but even that got pushed to the third week of December.  Our church didn't have any live musical presentations for Christmas, either for the adults or the children's choirs, so the only event that wound up on this week was the group of performances for my in-laws' church.  At least the weather was nice for grilling up some burgers before we headed out for the evening to rehearse!  The orchestra director threw us a curveball after practice was done by letting us know that he wanted each of us to have a song memorized - each of the three cellists in the orchestra played a solo for one of the three services, but we didn't know we had to commit the whole thing to memory.  Yeah, that called for some extra practice.

Wednesday - It's nice when Whirly manages to help cut down on her own work load.  This week she aced her spelling pre-test with a perfect 100, so there was no need to even look at that subject for the final two days of the week.  Our crew split up in the evening, with Mrs. Geo taking the two younger girls to their final children's choir rehearsal/party of the year, and Girly going with me up to our dress rehearsal.  Since my wife doesn't want anyone eating in her new car just yet, we all inhaled some pizza on our way to her school's parking lot before shuffling riders between the two cars and heading our separate ways.

Thursday - After three days of driving around town, a bit of a relaxing day of staying in the Bay Area was just fine by us.  Whirly knocked off her school work in good time, even after the usual pause caused by martial arts at lunchtime.  Curly had a piano lesson, but those are local and gave me a nice breather from plenty of work requests that have been coming up late in the week.  We took advantage of the break in activity to snag some German food for dinner and then headed home to relax.

Friday - Field trip!  And how about some pictures, this post has been very text-heavy! 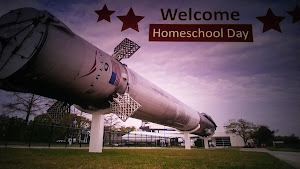 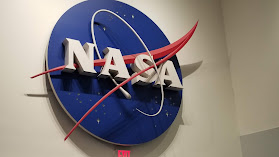 I found out several weeks ago from a friend that Space Center Houston was hosting a Homeschool Day, so we messed around with the order of our science lessons and have been learning about our solar system recently.  This field trip gave Whirly the chance to meet real NASA employees (including an astronaut), see historical items such as the last Apollo lunar capsule and a large collection of authentic gear from various space missions, and to try her hand at various experiments.  Going in she kept talking about the Mars rovers, but I think her favorite part of the day was the exhibit on combustion.  Now she knows the three ingredients needed for any good boom - heat, fuel, and oxygen.  It was a good day! 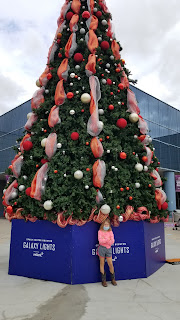 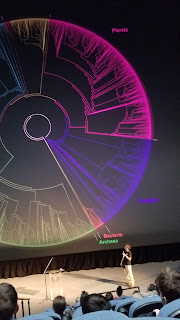 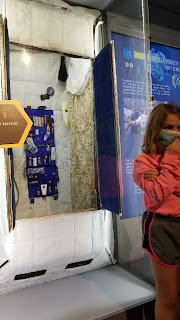 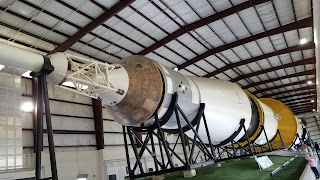 Once we left it was already time to pick up the big sisters from school, and Girly was happy to find out that her letter jacket had finally come in.  Huge win to get it before Christmas break! 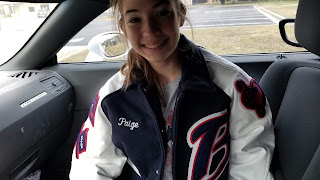 Saturday - Mom was nice enough to get everyone doughnuts this morning before anyone else had even crawled out of bed.  Most of the early part of the day was spent chilling at home and getting it ready for the upcoming week.  By early afternoon it was time to head up for our first Christmas performance, so Mrs. Geo dropped off Girly and me, and took Curly and Whirly over to their grandparents' house for a visit before the concert.  Unfortunately they discovered that my wife's grandmother, who is 90 and has Alzheimer's, had been taken to the hospital.  We're praying for her comfort and good decisions by her doctors and caretakers!  My crew all came to our first performance, along with my parents who had driven in from East Texas, and in addition to a fun music set Girly rewarded them with a tremendous job on her solo.  We wrapped up the night with dinner at Cracker Barrel and headed home for a short sleep before getting ready to do it all again Sunday morning!

Tune in next week to see how school wraps up for the calendar year.  Happy Hanukkah to all who celebrate!