Diary of a Homeschool Dad: Week 16

Thanksgiving week is upon us!  Time to kick back and relax a bit, spend time with family, and remember how much good there is out there.  There's so much that deserves our gratitude!

Sunday - We got to take the new car to church for the first time, and for once the kids were fighting over the right to sit alone in the third row seat.  After rolling back home for lunch, we decided that an afternoon trip to the grocery store was needed in order to prepare for the upcoming family feast.  Good thing we were given a gift card with the purchase of our new car!  Curly and I took some time to catch up a bit on The Mandalorian before I wrapped up the day by finishing a work project that probably took up too much of my weekend.

Monday - With all of the girls home for the day, Girly and I were the only two with plans.  Orchestra rehearsal had been moved back from Tuesday evening to Monday because of the holiday week, so we adjusted her cello lesson to a daytime affair.  I'd originally planned to take her out for her second attempt at getting her learner's permit, but when we got home from her lesson we got news that somebody's Covid exposure had caused the evening schedule to be nixed.  Suddenly the whole crew decided that our travel plans should shift as well!  I had quite a busy work schedule on either side of the journey to Girly's lesson, but we decided that once that was wrapped up we should head to my parents' house a day early (and that would allow us to visit the drivers license office close to them on Tuesday).  We loaded up the dog and some suitcases, and off we went.  It should be noted that, although our canine companion was permitted to be in the car, Mrs. Geographist still doesn't allow eating just yet.  Along our route we paused for some burgers at Texas' favorite fast food chain, and I sat in the car with Sunny while the girls ate inside.  I was allowed to inhale my dinner quickly, and then we finished our commute and had plenty of time to hang out with my parents before calling it a night.

Tuesday - Well, when it comes to getting this kid her permit to drive, I'm not exactly batting a thousand (or 1.000, for my baseball purists who may be reading this).  I came to the realization that I'd left all of Girly's identifying documents home so visiting the DPS was going to be out of the question.  Bummer!  I settled down after breakfast to spend a decent chunk of the day in front of my work laptop, but we all had a great day of relaxation anyway.  I even had the chance to show my kids an old goofy Western that my brother and I used to watch every time we'd invade my grandparents' house years ago.  My biggest goof of the trip was accidentally disabling the outlet where my mom had set up a slow cooker, and since the blunder wasn't discovered until it was practically time to eat we opted for take-out instead.  Oops.

Wednesday - I got up pretty early and hammered out a work request before cooking everyone some breakfast (biscuits & gravy, bacon, and eggs).  Mrs. Geo and I packed up ourselves and the dog, leaving our girls with my parents for one more night, and we headed for my in-laws' house.  All the girls in my wife's family like to get their dessert baking done together the day before Thanksgiving.  The other two husbands (belonging to my mother-in-law and sister-in-law) had already left to eat some burgers, so I accompanied all of the ladies to lunch at the local Italian restaurant.  After we got back, those of us who weren't busy in the kitchen took advantage of the awesome weather by hanging out on the driveway with the dogs.  At last we made it back home, and had a mini date night without kids over wings and fried pickles.

Thursday - Happy Thanksgiving!  It was a packed house, as usual, but the family matriarch who had just celebrated her 90th birthday was certainly missed.  The local football team put on a decent show, the food was abundant and delicious, and we had a great time seeing several folks for the first time in a while.  The neighbor invited the kids over to check out two tortoises he had living in his back yard, and then we attempted to digest everything during family game time.  After most of the folks had left for the day, my father-in-law pulled out their pre-lit Christmas tree for the annual tradition of decorating on Thanksgiving night.  Curly and Whirly got comfortable as they prepared to spend the night, and we took Girly home so that tomorrow we could once again try getting her a permit before she had to be at school for a home playoff game. 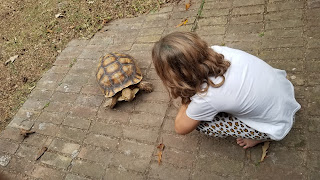 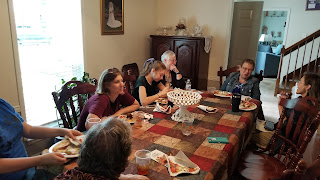 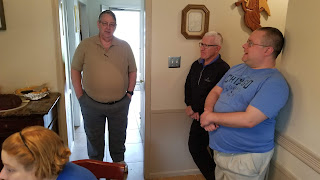 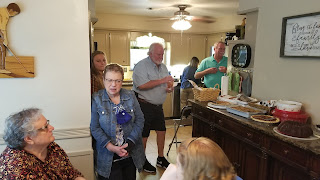 Friday - I couldn't believe it - we drove to the DPS and they were closed!  Aaaghhh!!  I had checked online, and because the website isn't the easiest to navigate I had just accepted what the mapping app on my phone said.  They were wrong, and by my count I'm now 0-5 on planned license trips.  Not only that, but the school band director sent out an email that neither the band nor the color guard would be performing due to inclement weather.  With our plans somewhat shot full of holes, however, we decided it might be fun to shoot something else.  I'd been promising Girly that we could hit the firing range, so that's exactly what we did.  She did pretty well for a rookie!  When we got back to the house, we found that grandma and grandpa had brought our girls home, but they didn't want to stick around to attend a cold, wet football game if their granddaughter wasn't going to be doing anything.  All of my girls agreed, but being the stubborn guy that I am (and having purchased all of the tickets in advance) I went by myself anyway.  It was a predictably sloppy game, but the home team persevered and won handily.  On to the second round! 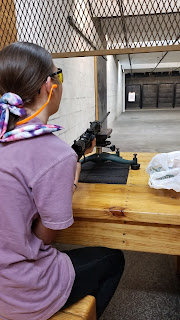 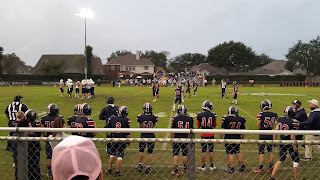 Saturday - The rain just kept coming, but that didn't stop us from getting our Christmas cheer going.  We visited a local tree farm to find a real tree for the first time in a few years.  Unfortunately we couldn't locate a live one to cut down, but we did find a really nice pre-cut option to bring home.  It was soggy, but the hot chocolate was good and the girls all kept a great attitude about the whole adventure.  After getting home, drying off, and setting up the tree, the kids didn't want to get out and about for dinner.  So they all raided the fridge for leftovers while Mrs. Geo and I got a second date night in less than a week.  Off to the mall with my girlfriend for some good New Orleans cooking - I'll take it! 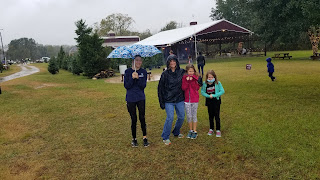 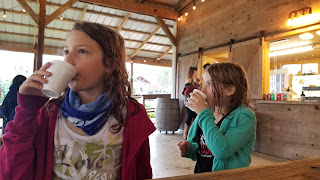 What a tremendous week.  So many activities, fun family times, and memories made.  Next week we'll all return to our classrooms as Christmas music starts filling the air and the calendar rolls over to the last page of the year.  I'm wishing all of you the best that December has to offer as we wrap up 2020!