Diary of a Homeschool Dad: Week 15

- November 22, 2020
A third handful of weeks has come and gone, and the upcoming week off should give us plenty of time to reflect on what's worked and how we can improve.  With all that has been going so well, however, this Thanksgiving is going to be an easy one to celebrate in our household.
Sunday - Off to church to start off the week, and I was able to throw some candy out to all the kids in our class who brought their own Bibles with them.  It's good to reward good behavior with sugar or chocolate, right?  We got Girly back at church from her weekend at high school retreat and a friend's house, and she promptly got a runny nose.  Ah, kids and their germs, such a lovely combination.  Consequently, it was decided that Sunday night activities (in this case, youth choir) weren't going to be such a good idea, so we saved a few miles of commuting by staying home.  That would turn into something of a theme this week!
Monday - Whirly and I didn't end up having the house to ourselves like we typically do, as we thought that having Girly with a cold under a mask all day would have just been cruel.  So Curly was off to school by herself while her sisters spent the day at home (but almost entirely on separate floors).  And if a kid isn't well enough to go to school, we're not going to let them do other activities, so I canceled the evening's cello lesson and we got started on some Christmas movies instead.  Given the amount of work I had pouring into my inbox, it turned out to be a good decision to stay close to the laptop as much as possible.
Tuesday - This day turned out somewhat similar to Monday, with multiple kids staying at home.  With Girly dealing with the final stages of "nasal distress" only Curly was out the door this morning, so I decided to be "that dad" and toss on my cheeky Blarney Stone sock hat while dropping her off at school (which got a bit of a stare, but somehow didn't embarrass her in the least).  Whirly had her usual martial arts lesson to break up the school day a bit.  Curly had a virtual clarinet lesson, which I almost cost her as I was running around cooking sausage and fried potatoes, and had forgotten to let her know that the time had changed.  She ended up being some 20 minutes late, but mercifully her teacher was understanding and didn't have a schedule conflict afterwards.  Once again the evening's activity was canceled, this time church orchestra up on the north side of town.  And once again, Christmas movies hit the family screen in the living room.  'Tis the season! 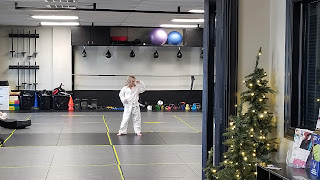 Wednesday - At last we had a healthy household again!  Girly was chomping at the bit to get back to school, if only to scare up some notes from friends to prepare for the quizzes and tests that she'd need to complete before Thanksgiving break.  After the girls were home, however, Mrs. Geo decided to forego the evening's activities at church because I was heading to make a big purchase.  That's right, we finally replaced the SUV!  I thought I could save her the trouble of sitting around the dealership for hours on end, but she insisted on coming and it's a good thing she did.  The one we initially had our eyes on had been sold already, and it was the last one in that color.  After looking over the options, however, we got the one we really liked best and got the deal done.  It's our first-ever new car purchase, and we celebrated by hitting a restaurant we'd never tried before named Whiskey Cake (but we were both too full after the meal to try their namesake dessert). 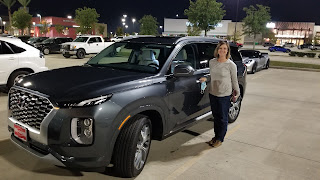 Thursday - The girls predictably wanted to be taken to school in the fancy new car today, and who can blame them?  Curly had a Glow Day (a special dress-up day with highlighters and lessons that focused on glowing in the dark) and pizza lunch that her teachers put together to try and make up for the lack of field trips during the fall semester.  She had lots of fun.  Girly, on the other hand, had lots of grades (six, I believe, was the final count).  Whirly had an especially rough day at martial arts where she didn't want to participate because what was being asked of her was hard.  Obviously that's not going to be an option...ever.  Curly's piano lesson was moved up by 30 minutes so I raced her over there as soon as I could get her out of school.  After grabbing a bite for dinner I knuckled down and wrapped up a work project that had occupied the bulk of my week before calling it a night.
Friday - We knew that Whirly had to focus on wrapping up her day early since her older sisters had early release at noon, and she rose to the occasion.  After finishing up an abbreviated day, I took her to her martial arts studio to deliver a pair of apology letters she'd written to her instructors.  Then we all hopped into the new car to pick up Girly and Curly together.  After some lunch at the local pizza joint we headed up to my in-laws to let them get a look at the new ride while also putting some effort into planning our upcoming summer family vacation.
Saturday - The initial plan was to try again for Girly to get her learner's permit, but I hadn't done my research so didn't realize they weren't open on weekends.  Weird, I could've sworn I saw appointments on Saturday the last time I looked!  Oh well, they say the memory is the first thing to go.  Instead we focused on cleaning up the house.  I took Whirly to a Saturday makeup lesson at martial arts so she could try picking up the details she'd missed on Thursday, and then Mrs. Geographist spent the evening taking in a documentary on Frank Sinatra while I took care of a few weekend job requests.  We both ordered dinners online shortly after 5 pm, hers on DoorDash and mine on UberEats.  Mine arrived at 6:00 and hers finally staggered up to our door at 7:45...after she'd already given up on it and gone out for something else.  In case you were wondering who gets our vote for best delivery service, now you know. 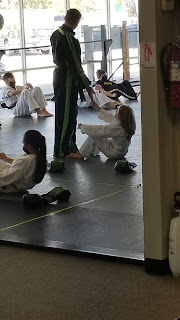 Everyone's now out of school for a few days and that's at least one thing to put on the Thanksgiving list!  I'd love to hear some of the things you're grateful for this year, so feel free to send me a comment below.