Diary of a Homeschool Dad: Week 14

Time is getting short before holidays start to fill the calendar.  This week was full of events and news, but at least none of it was because of the weather!

Sunday - Our 5th grade Sunday school class had their highest attendance week yet, with 18 kids showing up in person.  That would've been a good number for us before the world got weird so it's nice to see.  I still find it somewhat interesting to try keeping their attention when physical activities are limited but they do pretty well staying engaged even after I've been talking for 45 minutes.  It was also interesting to see who else was a little pink in the cheeks from the hours spent in the sun at the family fun day less than 24 hours before.  Our crew was going to try out a nice little burger joint for the first time (I have a co-worker that loves the place and they finally opened one nearby) but I pulled into the wrong parking lot by mistake and somehow we ended up going for a pretty well-known chain seafood restaurant instead.  Not my favorite eatery of all time, but they've got some cheesy biscuits that are pretty awesome.  Over lunch Curly suggested it might be great to rig up a live version of the online game, Among Us, but I told her that five people might not be enough and we should try to figure a way to get more kids involved - maybe we can make something up for Bible study to do it at church?  I headed back to church in the evening with Girly for youth choir, and then we relaxed for the remainder of the day before kicking off a new school week.

Monday - With mom and the two older sisters off to school, Whirly and I settled in for the week.  The big lesson we hit this week turned out to be the beginning of multiplication.  She already knows a few of her skip counting patterns, so the first few days are mostly about discussing the concepts rather than the math facts.  After school I took Girly to her cello lesson, but this time we went a different route around town to avoid Houston traffic (and also not go past her old teacher's neighborhood).  Once home I put the two younger girls to bed with a Christmas devotional book for kids that I discovered on my bookshelf - since none of us remembered ever having read it, now seemed like the perfect time. 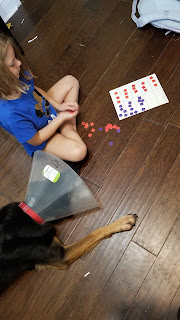 Tuesday - Whirly had an early doctor's appointment so the school work load was pretty light.  Fortunately there wasn't a long wait and the visit went pretty quickly, so we got a few things accomplished before martial arts.  It was interesting to see that the master (a designation for a 5th degree black belt or higher) who typically works with the older kids took just the white belts aside for a little training.  After picking up the older girls from school, Curly had an early clarinet lesson - still on Zoom - and then we had a quick dinner of burgers that I'd grilled up before Girly and I headed up north for orchestra rehearsal.

Wednesday - I had no idea what a "diamante" poem was before today, but now I know.  As part of Whirly's handwriting practice she had to copy two of these unrhymed compositions about Abraham Lincoln, so I thought it might be fun to have her come up with one about herself later in the week.  Kiddo did very well getting back into an uninterrupted routine, but even though the extracurriculars sometimes break her focus I think it's still important that she has activities that periodically get her out of the schoolroom.  By the time Mrs. Geographist was off work all of the girls were ready to hit the road to their midweek church activities, so I swung by the grocery store alone and then headed back to the house to knock out some work requests before calling it a night.

Thursday - Dad fail!  I neglected to double-check Curly's schedule and let her head off to school in the outfit she'd picked for her class' fall Glow Party.  When the school has a uniform, that's generally frowned upon.  Not only that, but she was expecting pizza to be provided and didn't pack a lunch!  Well, at least I wasn't at work so we were able to fix the whoopsies, and it was a good trial run for the party...next week.  It was still fun watching Girly volunteer to fix up Curly's hair for the day (even though the middlest daughter doesn't much care for anyone fiddling with her hair).  Mrs. Geo found out her long-term sub position won't be going permanent and therefore she'll wrap up her time with this class when they leave for Christmas break.  After Curly's piano lesson we all decided to visit a local TexMex joint before heading home so mom could get on her disciple group Zoom chat. 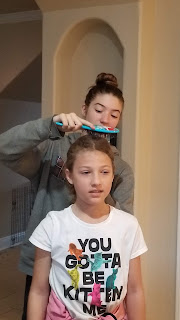 Friday - Well, Curly may not have been able to dress casual on Thursday, but Friday was the day for it.  The school has an annual fundraiser where the kids gather pledges for a big Fund Run, and they all had to dress for a color run around the football field.  Whirly and I wrapped up our day by lunchtime and were able to stand in the bleachers to cheer the kids along.  Obviously a bath was needed for this kid after getting home!  Picking up Girly at the normal time was much easier since high school doesn't have the same dismissal procedures and she can just waltz right on out to wherever my car happens to be sitting without regard for a line.  We had to load up shortly after everyone got home in order to get Girly to our church's high school retreat - which was a pretty big deal because the kids are getting to meet the man who will soon be their new youth minister.  Fortunately we didn't have to stick around until the first day's activities ended (at 11:30 pm...45 minutes away from our house) because kiddo is spending the weekend at a friend's house.  So the rest of us hit a nice brick oven pizza joint and headed home to hit the sack at a decent hour. 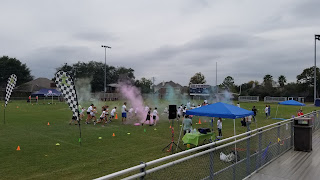 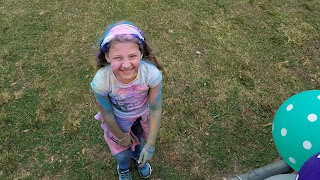 Saturday - Since we're down to one car, why not take some time on a weekend to test drive some potential replacements?  That's what we decided to do first thing in the morning, as we swung by and tested a pretty nice SUV.  Mrs. Geographist has had her eyes on a couple of models out there, so we wanted to be able to compare them.  Needless to say, the two little girls just LOVED the idea of a new car.  After giving the first prospective vehicle a try we went up to visit my in-laws, and caught some college football and the golf tournament in Augusta (in November!!) before taking the girls to the park.  I love watching how kids can let their imaginations go crazy when they play.  After leaving the family get-together we went to our second test drive, but decided it didn't seem to be quite as good.  I guess we'll see where this takes us! 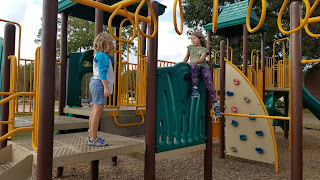 One more lap around the track before Thanksgiving break!