Diary of a Homeschool Dad: Week 12

- November 02, 2020
This week was, in a word, different.  Lots of events, quite a few miles driven as we criss-crossed our way around town (and beyond), and trying to keep up with school, work, and important appointments.
Sunday - The week started out much the same as any other, with our usual church service and Bible study hour.  It seems like class participation, at least among 5th graders, is gradually increasing as we had our best turnout to date.  Certain events transpired to derail my participation in the orchestra recording session during the afternoon, however, so I won't be part of this year's Christmas presentation.  That's really a bummer because I think it breaks a run of about 13 or 14 years straight at this church.  But at least I'll still get to perform with Girly at our adopted church on the north side of town where my in-laws are members.
Monday - Mrs. Geographist and the two older girls were off early to their respective campuses to begin a new school week.  Whirly and I hit the books fast to try and get a head-start on what promised to be a week with many disruptions.  Even with a pretty steady flow of work from the office, however, kiddo churned through all of her subjects like a champ.  I got my first shot at using the slow cook feature on our Crock Pot for a rack of ribs, which turned out amazingly moist and tender (if I do say so myself).  It's not the neatest thing to throw together, but as long as you've got some soap and a sponge it'll all turn out ok. 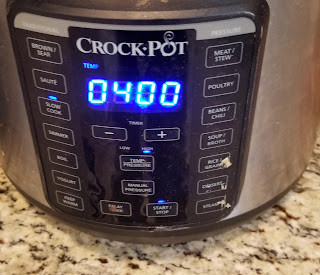 Tuesday - For the first time, I didn't go inside the studio to watch Whirly's martial arts class.  After handling a couple of chores, it seemed best to wait outside and enjoy the sunshine while I tried to avoid being a distraction to the students inside.  For science class, we're running a little growing experiment on the back porch where one little pot of seeds gets water and sunlight, while the other gets water but must grow in the dark.  Both pots sprouted on this particular day, but would you care to guess which one is taller?  Once the big girls were home from school I got Curly ready for her virtual clarinet lesson and headed out the door for dinner and rehearsal with Girly.  The orchestra decided to have a dress-up contest, so I put on some boots, a vest, and cowboy hat (and with a "bandana" included, I think I may have been the bad guy).  Paige dressed as a scarecrew, including makeup.  We didn't win any prizes, but enjoyed the fun they were having, as well as a few sugary treats.  After getting home I was glad to have that extra sugar in my system because I needed it to crank out some work requests and stay up past midnight with Whirly to prep for what was coming the next morning. 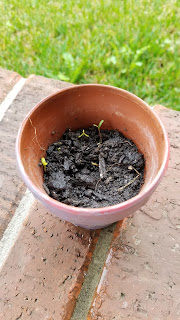 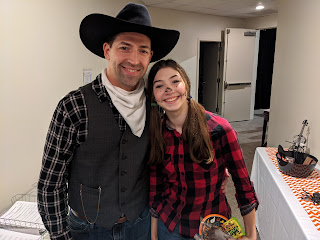 Wednesday - A 5 am alarm comes much too soon when you've been up well past midnight.  But it was necessary, as Whirly needed to be sleep deprived.  After having her help me cook up some biscuits and gravy for everyone, I had her pack up her school books before we headed out the door to the Texas Medical Center.  Whirly had an EEG performed to diagnose some "staring episodes" she's been having, and part of the test involved a nap.  I only wish I could've had one, too!  She handled the proceedure beautifully and then got to watch dad give someone a jump in the parking garage on the way out.  After snagging lunch and getting an unexpected tour of the SE side of Houston (including an up-close view of UH's football stadium) we headed east to drop Whirly off with her grandparents for a couple of days.  Along the way she got a lens cover from off my dash cam stuck on her finger like a ring, which had to be cut off.  I guess the EEG won't diagnose what's wrong with that part of her brain!  Once home I had tons of work to get to, as we're trying to get plenty of projects done either before the election or before the end of the 4th quarter, so it was another late night. 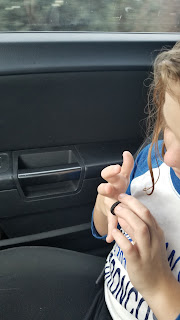 Thursday - Curly was the only one of the kids that needed to be dropped off this morning, as Girly and I were headed to say farewell to her teacher and my friend, Alex.  The funeral was held at an Episcopal church just west of downtown, and considering the state of the world right now the attendance was sizable.  The service itself was quite long but beautiful and very fitting for the man we all loved.  Afterwards we all headed to a reception at an outdoor restaurant to share stories and catch up with several friends we hadn't seen in months or even years.  I even ran across a cellist that I'd played with some 22 years ago!  After heading home and picking up Curly from school, it was necessary to change clothes quickly in order to get her to a piano lesson.  Since I'd had personal time with the other two girls, I decided Curly needed a date with Daddy.  She chose La Madeleine for dinner, followed by Dairy Queen for dessert.  I offered to take her to a pawn shop to help me scope out a new gun but she didn't go for it.  And once again, it was back home to put in a decent work day that didn't happen while the sun was up. 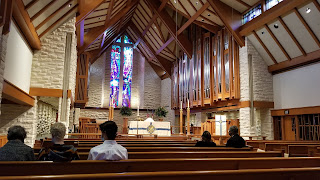 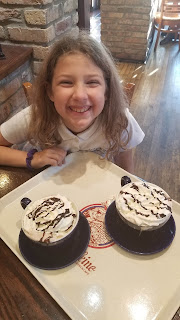 Friday - After having put in the time at night to make sure all of my coworkers were caught up with their projects, I had some time to enjoy breakfast with the orchestra director of our adopted musical group to the north.  Getting to know someone over biscuits and sausage at a Cracker Barrel isn't a bad thing!  Once that was done I swung by my in-laws' house to drop off some pictures and cards the girls had made for their great-grandmother (Mrs. Geo's grandma) who turns 90 years old on October 31.  Had a brief chat with my father-in-law, and then headed out east to retrieve Whirly from my parents.  She'd nearly finished all of her work for the week, which seemed like a pretty good accomplishment for such a crazy few days.  Once we got back home, I wrapped up the last of my work for the week while Mrs. Geographist ordered some TexMex.  We sent the kids off to go be quiet elsewhere in the house and we got set up in our dining room to have a virtual dinner party with our 5th grade teaching team from church.  It was so fun, and a great way to make up (at least somewhat) for not being able to host everyone for dinner early in the quarantine.
Saturday - Whether it's Halloween or Reformation Day, the end of October is great for having some fun.  In Texas the fall weather is finally starting to beat back the heat, football is on TV, and folks around the neighborhood seem to be ready to get outside and meet one another.  I started off the day with some yard work since there's no sense in having a jungle greet our guests.  Whirly had a makeup martial arts class for the Thursday she'd missed, and her instructor gave her the new stripe on her belt that she'd earned this month.  Each color means something different, and right now she's got a black stripe for focus and a white stripe for speed.  I swung Girly over by the school for a color guard practice before their final home game next week, while the wifey headed across town to leave Curly at a friend's house for festivities and a sleepover.  Her parents swung by for a very brief visit, but her sister and brother-in-law spent the day with us.  After enjoying some sports and dinner at the local wing place, we all got ready for trick-or-treating.  I stuck with my train bandit theme, while Mrs. Geo channeled her substitue teacher muse, Viola Swamp.  Girly went to a high school party at a friend's house dressed as Sandy from Grease, and Whirly put on everything she had with unicorns on it.  It was nice to see that nobody appeared to let world events slow them down! 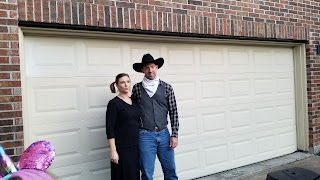 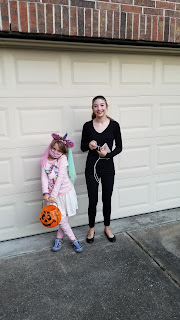