Diary of a Homeschool Dad: Week 9

- October 12, 2020
The final week of the first quarter is upon us.  Hard to believe we're already halfway through the first semester!
Sunday - My last time playing the cello on stage for a few weeks was also my first time to attempt playing with a face shield instead of a mask during church.  I found the results to be better physically, but it was necessary to shift it around to the right to keep from running the thing into my fingerboard.  Once we returned home it was time for our final online-only Bible study with our 5th grade class - next week we go back to teaching in-person for the first time since March 1.  The older two girls are heading into exam week, which turned out to be a great time to have Curly practice her clarinet for us in advance of her playing test.  I love hearing these kids make music! 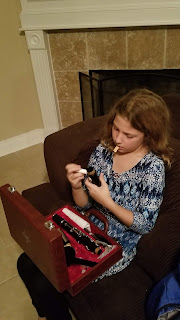 Monday - There always seems to be an extra bit of early morning chatter among the girls when big tests are in queue (especially Girly when she thinks high school is out to get her) and today was no different.  It was just too pretty a day for Whirly and I to stay inside, however, so we took a couple of our subjects out onto the back patio for a while.  Having hurt my foot over the weekend by jumping a fence, I found the opportunity to prop my feet up and read a bit of The Fellowship of the Ring was an enjoyable respite while my pupil focused on her work.  Alas, the many distractions of outdoor life proved too much for my little girl, and so we were forced back inside after a while in order to make sure she'd finish at a decent time.  Oh, and it was also important to get back inside so that I could catch the local nine start their playoff series with a win! 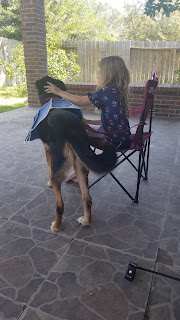 Tuesday - If martial arts teaches Whirly anything, it will be how to do a proper pushup.  There is a fair amount of physical exertion planned into each lesson, not to mention the "punishments" meted out to those who won't pay attention or follow instructions.  I really have to give her instructor credit, though, he's great with the younger kids.  So far it seems like this is going to be exactly what our girl needs.  Girly was free from her drill team obligations (nobody is travelling with the team to their neutral-site game on Friday, so the kids get to have more study time) but Curly still had her virtual clarinet lesson.  I'm starting to get curious about when those will start being in person again, since just about everyone seems to be getting around to standard operating conditions. 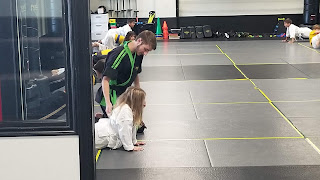 Wednesday - Last day of school for the week!  Because the school where the older girls go applies a protective coating that doesn't last the entire semester (and because it apparently takes two days for them to go through all of the buildings on campus), they've built a Fall Break into the schedule.  So if two kids are home on Thursday and Friday, the third is not going to be the only one with her nose to the grindstone.  For a new kitchen adventure I found yet another recipe for marinating chicken (another first for me) that got rid of some food in our fridge that might not have otherwise been used.  I gotta say, it didn't look all that appetizing at first but this is the most tender chicken I've ever worked up so we'll need to keep this recipe for future use.  I'll just have to make sure we stay well-stocked on mayonnaise and lemon juice (for when the fruit isn't ripe on the plants outside)!  After dinner it was off to orchestra rehearsal for me, but Mrs. Geographist skipped choir practice to make sure she got her classroom grades into the system before her midnight deadline.  By the time I returned home from practice we had visitors - my parents had come into town to hang out and enjoy a few days while the girls were free!
Thursday - A few days without school doesn't mean we're without lessons.  Martial arts continued and piano persists.  Curly was supposed to have a friend come over to play, but since the kids never got the parents involved in their planning it never panned out.  She was pretty bummed, but having the grandparents around to chauffer the sisters to the nearby craft store (not to mention provide an awesome breakfast of kolaches!) hopefully softened the blow.  Speaking of "blowing", a new hurricane decided to make its presence known - Delta took aim on the western Louisiana coast, so my parents thought it would be best to stick around closer to us for an extra day to make sure they didn't return home to no power.  We had cause to celebrate as well, as our baseball team successfully completed a series win and advanced to the league championship series.
Friday - I had to take the dog to the vet early in the morning, as he would not leave a foot wound alone despite several days in a soft cone.  He'll have to deal with a hard cone and a routine of medical treatments for a while now...the frustration and expense of dealing with an animal who doesn't know what's best for himself.  The younger two girls spent most of the day playing while I did work and Girly worked on her homecoming mum with grandma.  This time we didn't tune in to the Weather Channel like the last couple of storms.  We wound up having a lot more wind from Delta than either Laura or Beta provided, but mercifully the water never showed up.  After Mrs. Geo finally got home from what was supposed to be a half day in the classroom (before the administration planned an end-of-day meeting to stymie her plans) we decided to eat out for dinner.  It turned into a fairly unique experience as the power went out shortly after we ordered and we had to eat by the light of our cell phones.  I grabbed some Blue Bell on the way home (still the best ice cream in the country) and we played a movie trivia game before calling it a night. 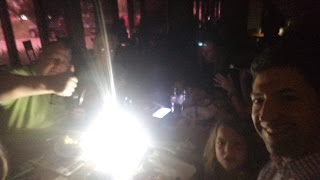 Saturday - Girly had her cello lesson canceled for the day and will instead be recording her region orchestra audition at home.  After my parents treated us to donuts for breakfast, I signed some copies of my book for them to send out to some family and their church friends.  They headed back home to find a few more shingles gone and a little more of their fence down, but apparently nothing that will change what the adjuster determined for insurance repairs.  The two gimpy males (me and the dog) tried to stay off our injured feet for most of the day, so I got to watch nearly an entire college football game for the first time in what seems like forever.  Mrs. Geographist finally got the haircut she's been wanting - we never can agree on how long she should keep it, but she reminds me that it's her head so she's the one who has to deal with it once it gets too long for her liking.  She's super cute with the new trim, so I won't complain "too long".  Girly headed off to a friend's house for a birthday party, so the rest of us just threw a freezer pizza in the oven and relaxed.
Next week promises to have a few new beginnings as we hit our tenth week of school.  Double digits already!