Diary of a Homeschool Dad: Week 8

- October 04, 2020
In the greater Houston area, there's one day that seems to get people excited and in a good mood like no other.  That's the day after a long, hot summer when we finally walk out our front doors and get a chilly breeze.  And this was the week it finally happened! 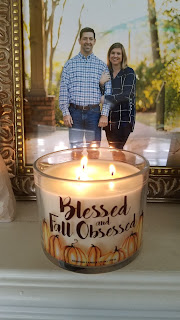 Sunday - Mrs. Geographist started off the week on stage at church, singing with our choir.  After a Texas Roadhouse lunch, during which I tried to catch some football but without much success, we headed home to meet virtually with our students.  Coming off a very successful 5th grade retreat we had pretty solid attendance at the weekly Zoom meeting.  At our church, the 3rd grade and 5th grade classes are vying for the unofficial title of largest class, and our crew has been pretty active so far in their limited time at the summit of the elementary school pile.
Monday - Everybody was back to school for the beginning of the week, and Curly would finally get another five-day school week like she'd been hoping.  Not only that, but with activities beginning to pile up again, it turned out to be significantly busier than many of the rest.  Whirly had several tests in queue, and both of the older girls are approaching their quarterly exams, so the timing has turned out to be interesting.  After the school day was done, I decided that a little something sweet might help everyone make it through the week.  Originally I wanted to make use of some citrus fruit that Whirly has been picking from various plants in our yard, but then something caught my eye in the pantry.  On a recent shopping trip, I made the mistake of getting self-rising flour instead of the normal stuff (and to be honest, I didn't know the difference at the time).  So it seemed like this was as good a time as any to start using it up, and the package had a recipe on the side that seemed like it just might do the trick.  Voila - my first attempt at coffee cake, courtesy of an errant grocery purchase. 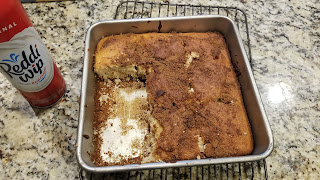 Tuesday - Behold the joy of a cool, crisp morning!  As we all began to mosey out to the car for the second school day of the week, it was obvious that the first attempt at fall had finally reached us.  The temperature read below 60 F for the first time in months, so once the littlest princess and I returned home the A/C got shut off and I began opening up the windows to air out the house.  A drizzle that began less than an hour later sent me scrambling to close most of them, but it was brief and we were committed to getting some fresh air.  Soon it was off to martial arts for a second individual lesson, where Whirly was awarded a black stripe for focus on her white belt (each color represents a separate discipline).  Given her history of struggling to pay attention at times, that was a major win!  We arrived home right as the baseball playoffs got going, so like any good sports fan I got her started on some self-directed work and settled in to catch some of the action.  By the time everyone was home from school and was getting ready for homework and dinner (or, in Curly's case, to have a clarinet lesson), our team had a victory under their belt.  Celebrate, but don't start counting chickens. 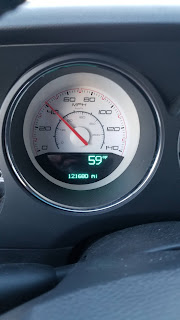 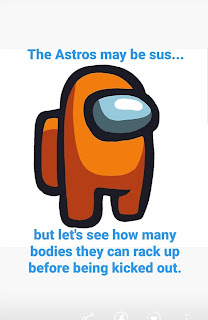 Wednesday - Two days of cool weather in a row calls for more open windows and a bit of fall treatment.  Mrs. Geo had already whipped up some pumpkin spice coffee to enjoy, so I thought it was time to light up one of the new candles (yes, the one in the picture at the top of the page).  Whirly and I ran into a bit of a snafu on her handwriting, as I was unable to print practice sheets.  The cyan ink cartridge was empty, but why should that affect black and white copies?  After her first test of the week, which happened to be English, she was able to kick back and watch a little playoff action with me.  Hooray, it was another win!  On to the next round.  And for Mrs. Geographist and I, it was on to church for rehearsal.  Practice is scaled back and we have protocols to follow, but it was good to be back.  The last thing I did before Spring Break was to play a pops concert at our church the night before our flight out of town, and by the time we returned everything was in lockdown.  That means the gap between rehearsals had reached 7 months.  And because it's now only 3 months until Christmas, guess what kind of music we've started!
Thursday - This has become the "everybody has something to do" day of the week.  It started off with Whirly heading to her first group lesson for martial arts, followed by lunch at a nearby fast food joint (and get this - the dining room was open!).  Girly hasn't gotten her permit to drive yet, but her car was due for a new sticker anyway, which meant I needed to swing it by the shop for an inspection before picking her and Curly up from school.  As the big girls grabbed a snack and changed clothes, I got Whirly set up with a math test - she was a bit behind schedule due to our chores - and then we headed back out.  Girly was back at school for color guard practice, and Whirly was heading to a piano lesson.  A busy day like this deserves a good dinner, so I started some tenderloin filets on the grill while Mrs. Geo made garlic mashed potatoes.  And remember my earlier comment about citrus fruits in dessert?  I finally got to use them - lemons, oranges, and a small lime-like fruit that I think is a calamansi - as I massaged an online custard recipe to make a pie.  If you like lemon bars, you would've loved this one. 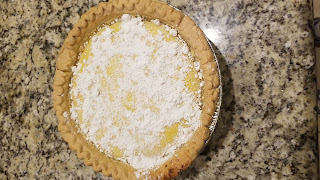 Friday - This was an extra-special day for our little homeschooler, as she has really been missing some of her friends from last year.  Play date!  The mom of another little girl who is also learning at home this year hosted us, and it was great watching two little girls enjoy the carefree joy of playing together with a friend they'd missed for too long.  No traveling to away games this season meant no color guard for Girly on this night, so we all hit a local Tex-Mex spot to welcome the weekend.  We made it through a complete week with no schedule interruptions, so that is certainly something to celebrate!
Saturday - This week we started getting our girls to come up with Christmas wish lists because we know their grandparents like to get an early start on planning.  Combined with the dip in temperatures and the start of practicing Christmas music at church, my wife was apparently starting to get her seasonal juices flowing.  We used to be members at Moody Gardens in Galveston and have enjoyed their Christmas celebrations, so she decided we should get another annual pass.  After Girly's cello lesson we hit the road down to Galveston Island and made our way to the iconic pyramids.  The Aquarium Pyramid has been redone since we last visited, and the Discovery Pyramid had just opened for the first time since the start of quarantine.  Mrs. Geo got to see her favorite animal - she loves penguins because they're so derpy.  Makes me wonder what she saw in me...  A quick drive down the Galveston Seawall brought us to the Rainforest Cafe for dinner to cap off a nice day of fun. 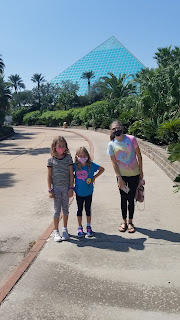 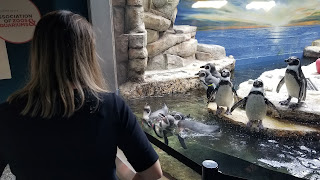 Exam week and fall break are upon us, so there will certainly be some fun adjustments to the normal flow of things.  At least that's what we're all hoping once the pressure of all these tests finally passes!