Diary of a Homeschool Dad: Week 11

This turned into quite a musical week, and not just for me.  It seems like more and more around our house is revolving around music - lessons, rehearsals, band, and choir.

Sunday - I really do enjoy teaching 5th grade, especially during years like this one as Curly and her friends have all made it into our class.  These kids are something else, and I'm glad the adults in charge have allowed me to stick around this age group for the past seven years.  Now that we're back in person, I was finally able to pull out one of my favorite lessons - "What does the Bible say about itself"?  Each year during the first few weeks it's my goal to share a memorable lesson that'll serve to ingrain something into their minds while also helping establish raport with the group.  This topic is perfect - I bring a backpack full of items that Scripture compares itself to, including a hammer, lighter or matches, honey, silver, flashlight, and seeds.  But the one thing they love best is the sword.  Yep, I'm the teacher who brings a short sword to church and unsheaths it to make a point in class (pun intended).  Of course, the minor detail that I brought everything in a pink sparkly backpack owned by Whirly is of no consequence.  The afternoon was unfortunately taken up with the heartbreaking news of a friend's passing, as I mentioned at the end of last week's blog.  I spoke with a few friends on the phone, as well as Alex's daugher, as we each began processing the sadness and grief. 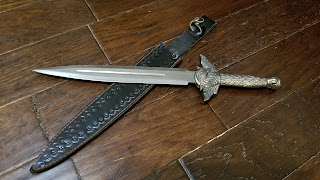 Monday - This week was slightly difficult because of the amount of work requests I had to answer while still teaching the little miss.  But the good thing about homeschooling is that, in addition to being pretty flexible about how and when we get our subjects completed, Whirly is also becoming better at being self-directed.  Once everyone was home for the day, we had to discuss dinner plans that had been thrown a curve.  Originally, Mrs. Geographist and I were going to join other leaders from our Bible study class for a virtual dinner party, but we had to delay it at the last moment.  It's rare that I volunteer to visit Cracker Barrel, even though it's just at the end of our road by the freeway, but it just seemed to be a perfect idea to everyone so that's where we went.  After dinner, it was time for this dude's head of hair to get a trim while I watched my fantasy football team edge out a narrow victory to take over first place in the league.  Ever notice that roughly the same amount of clippings that falls down the neck of your shirt after a haircut also winds up in your mask?

Tuesday - The week was about to get full of activities, so this was another day I needed to focus on office emails.  In addition to having a solid martial arts lesson, Whirly handled the rest of her work like a champ.  Obviously she's not doing everything perfectly, so there's lots of opportunities to go back and rework some of the concepts, but it was nice to be able to fill up a board with assignments and let her run with them.  Curly had her clarinet lesson shortly after school, but Girly and I couldn't stick around for either that or dinner at home.  We were off to the north side of town to practice with another church's orchestra (where my in-laws attend) in preparation for their musical Christmas program.  Their director was gracious enough to let us participate, even though we're not members are aren't joining in their weekly services, and I'm super excited about being able to make music alongside my kiddo.  Plus I got to see some musicians that I used to play with when I was in high school who also attend that church! 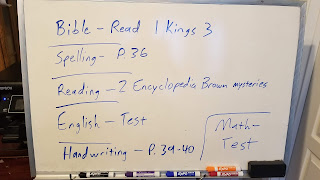 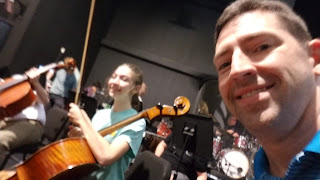 Wednesday - Familiar refrain: lots of work from the office, Whirly knocks out her work like a champ, and then we do music.  Today we also inserted a doctor visit for Whirly for her annual well check, which is a bit more of a chore considering the current state of health considerations in the world.  But fortunately there were no shots!  Everyone else in my house participates in children's choir, which happens an hour before my usual orchestra rehearsal time (and this week we had a delayed start to accomodate wind and brass), so I spent a fair amount of time in conversation with a younger member of our church's choir who I've gotten to know better since the beginning of quarantine life seven months ago.  He's contemplating a lot of things from work to relationships, and we had an opportunity to just sit around and share ideas back and forth.  Then it was on to practice before heading home to call it a night (oh, and handle a few more work requests).

Thursday - After three straight late nights I took advantage of a lull in work to sleep in a bit.  Whirly didn't seem to mind, and after she'd done so well throughout the week I was perfectly fine with giving her some free time.  Too bad her martial arts instructor wasn't feeling as generous, because when kiddo accidentally left her gloves at home that meant she'd had to start the class with 20 pushups before borrowing someone else's.  On the way out the door, she noticed they were advertising a
"Parents Night Out" the next day, so since a date with the wifey sounded like a great idea I signed her up.  Curly and I cruised over to her piano lesson after school, while Girly stayed on campus to do guard practice.  We tried a new pizza and burger joint for dinner, which had an ambiance similar to a British pub, and I was relieved for once to not have a stack of work waiting for me at the end of the day.

Friday - Throughout much of the year, the last day of a full 5-day week has been very light on workload.  We did this for a few reasons, including providing flexibility for any incomplete work and giving us time for an unscheduled activity or field trip.  This week, however, I thought it was important to step up the number of lessons for some of the subjects (especially Math and English) to make sure we weren't left with a bunch of unfinished material by the time school ended.  But I made sure there wasn't enough to make the day run too late - after all, I had a date to enjoy!  Whirly got on a superhero costume for her fun evening while Curly and Girly planned out how to spend their Friday night together.  Mrs. Geographist and I hopped in the "cool car"and headed up to a nice steak place to enjoy really good food and wonderful company.  I always tell people to make sure you can marry someone that you enjoy sharing hours of conversation with!  We're also hoping it's a premature celebration for good job news, as she found out her long-term sub position has been extended and may finally become permanent if she's picked from the pool of candidates.  Since she has the classroom, I'd like to think she has the edge! 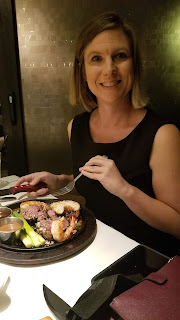 Saturday - A great fall chill was in the air, and since my foot has finally stopped bothering me I decided it was time to get out in the yard and finally cut back the bushes in front of the house.  This was also the day of the big neighborhood garage sale, so quite a few folks were roaming around our cul-de-sac.  I took Girly across the street to meet some neighbors who want her to handle some holiday pet-sitting (which seems a fitting high school activity for someone who wants a career around animals), and we ended up having a long chat about a ton of life experiences while strangers came and perused their wares.  After a brief trip to the park I hit the grocery store with Girly before heading home to try my hand in the kitchen once again.  This time the baking experiment would utilize the orange tree in the yard (or maybe they're satsumas?) which has had quite the abundance of fruit produced this season.  Unfortunately the bundt cake hadn't cooled enough by the time we had to put the younger girls to bed, so the decision was made to convert this particular baked good into breakfast for the following morning. 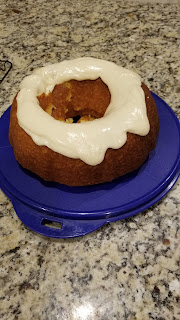 On to a new week that promises to have its share of schedule interruptions and fall temperatures.  Take a deep breath...