Diary of a Homeschool Dad: Week 7

Routines are starting to be beautiful things once again around our house.  Activities are picking up and, other than the two of us who sit at the house during the weekdays, our lives are now quite similar to the way they were in February.  Except for the tropics, that is...

Sunday - It was an early morning back at church once again, although since neither Mrs. Geographist or I were taking part in the music this week (and therefore no pre-service rehearsal or sound check) we could at least wait a little later to head out.  Plus our local kolache joint was open by the time we passed by!  The morning was bright, but the trip home gave us a glimpse of what was coming.  Tropical Storm Beta was menacing, and as we headed through downtown Houston we said goodbye to the sun for the last time in a few days.  By the time we grabbed pizza for lunch near our house, the crew was having to run through a solid drizzle falling on the parking lot.  Bible study on Zoom was a success, however, probably because everyone else was avoiding the wet stuff as well.  The wife and I decided to start watching a new TV series (for us) - Cobra Kai.  I thought the story line was superb and it was nice catching up with our old friends from the '80s (along with their relevant-but-dated pop culture references, which were awesome). 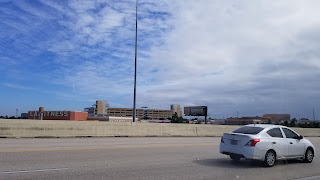 Monday - So much for the schedule!  The local ISD where Mrs. Geo works decided to close for inclement weather, but the private school where our oldest two girls go remained open.  That gave my wife the opportunity to teach Whirly for the day, which was a bit of diversion that I think they both enjoyed.  For Girly and Curly, however, it was business as usual.  I was able to focus all of my attention on work requests, which have been picking up lately.  It's nice that my company has managed to perform at a high level in spite of the challenges of separation and economic turbulence.  By the afternoon it was apparent that the oncoming storm was definitely going to head our direction and the girls' school opted to close in preparation.  So for the second time in a month, we entered "hunker down" status - but at least this time we have a new game to play. 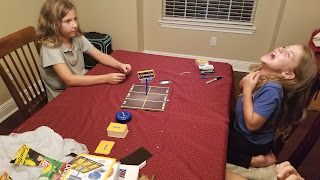 Tuesday - What do you do when you're in a coastal county and a tropical system decides to visit?  Turn on the Weather Channel and make frequent trips to the creek!  It was pretty obvious early in the game that the water levels were going to rise much higher than they did with Laura.  The rain outside didn't outpace the downpour of work requests, however, so I was locked in front of my laptop for the bulk of the day and into the evening.  Whirly was supposed to have her first lesson in martial arts but, as with a number of things recently, that had to be postponed for a later date.  One thing that doesn't stop with the rain, however, is Zoom - and therefore Curly was still able to have a clarinet lesson. 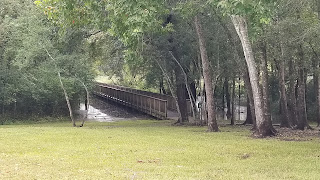 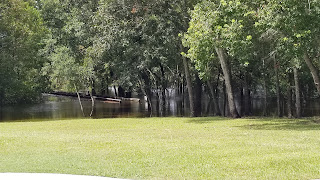 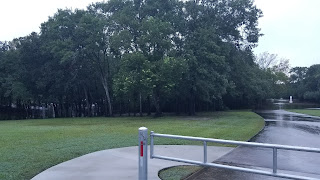 Wednesday - Beta had made landfall on Monday night, and we kept an eye on water levels as the rain bands continued and runoff came down from our upstream neighbors.  Obviously taking a walk on the path beside the creek wasn't an option, as you can see by the images (taken one each on Monday, Tuesday, and Wednesday).  Typically that boardwalk stands a couple of feet above the creek where it crosses, but it spent the better part of three days submerged.  More than one animal was displaced, as Girly and I caught sight of a fawn trying to figure out the best option to avoid us without going for an unpleasant swimming lesson.  We all took turns getting caught in sudden cloud breaks, as our best efforts to only leave the front door during a lull proved unsuccessful.  But at the end of the day it was apparent that we weren't going to deal with any sort of property damage from this storm, and the schools all decided to reopen on Thursday.
Thursday - Back to the grind, as Mrs. Geo, Girly, and Curly each hit the classroom and I tried to salvage a weekly lesson plan for Whirly.  She seemed pretty motivated and knocked out quite a few subjects early in the day, although we had to first wade through a mess of corrections from her Monday math worksheet.  At noon we hit the martial arts studio (dojo?) and Whirly went through a one-on-one lesson with one of the leaders there, who we discovered has recently reached the level of 5th degree black belt.  Our goals for our youngest princess are pretty simple - develop character and a good mentality, enjoy physical fitness with potential new friends, and improve discipline.  She came home eager to do the homework they assigned, which included memorizing a portion of their class motto, as well as performing tasks that would build self-discipline and exhibit respect around the house.  Girly had to stay at school for an all-evening practice prior to the first "Friday night lights" gameday, but the rest of us were able to take Curly to her piano lesson together.  Her teacher hosted a Zoom recital of hymns, and we were able to come inside to hear her live while her grandparents logged in from their homes.  Kiddo did a great job and this was cause for celebration, and BJ's Restaurant (and their delicious Pizookie desserts) made the perfect setting. 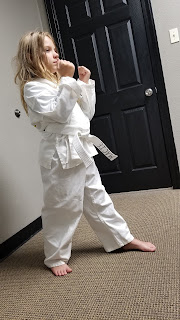 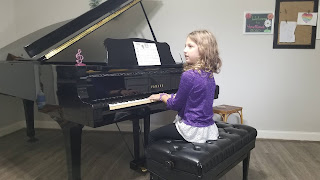 Friday - Typically the last day of the week carries a lighter workload, but since we'd already lost a pair of days to the weather it was important to knuckle down.  I was very proud of the effort Whirly showed, and she managed to catch up and get everything done shortly after Curly got home.  As soon as Mrs. Geographist got home from school, however, we had to rush out the door to cross town in time for our church's 5th grade retreat.  Typically we'll take the kids on an overnight camping trip during their final year of elementary school, but with protocols being what they are (and most camps not allowing anyone) we opted for a split of in-person and remote sessions.  This is the best time we usually have to get to know our new class well, but fortunately we already have good relationships with many of the kids...including our own Curly.  Outdoor eating and teaching, along with games that allowed for distance (such as pool noodle tag and a water balloon fight) made for a great evening, topped off with shaved ice treats.  After we were done, we again had to rush across town as Girly was texting us that the football game was nearing its conclusion.  Our school pulled out a close win over a team from up north that's always beat us down pretty handily, and in spite of such limited practice (and no band camp) the musicians and guard did a great job.  We had to catch the performances on recordings, but are certainly looking forward to attending our first game live!
Saturday - While I kicked off the day taking Girly to her cello lesson, Mrs. Geo and Curly got started on the "boys vs. girls" games of the second day of 5th grade retreat.  I came home to a bunch of cheese balls strewn about the back patio, which the birds and ants must have appreciated greatly.  My wife seemed to be in need of some retail therapy, so we hit the mall.  Clothes, candles, and cosmetics are popular with the ladies, right?  After also snagging a cart full of groceries while we were out, it was back to the house for some yard work before the wrap-up virtual meeting with our 5th grade class.  The girls team smoked the boys and we had more excellent Bible study together.  This is definitely going to be a great class, and I'm looking forward to the prospect of teaching them in-person sometime soon.
Curly pointed out that she's been in school for seven weeks and has only once made it through a full Monday-Friday schedule in class.  With a midweek start, a sick day, two tropical storms, and a holiday, consistency hasn't necessarily been easy to come by.  I told her this week is her best shot at getting a second one under her belt - let's see how it goes!