Diary of a Homeschool Dad: Week 5

Labor Day is such a weird holiday - "Hey, let's celebrate labor by not working!"  Yes, I know the history and know what it's about.  No, I still don't think it's a very good excuse for a day off.  Be that as it may, we still have a three day weekend so we might as well use it for something good.  Let's see how this week turned out.

Sunday - I tried something new at church: a face shield.  Several folks use them there, and I like the fact that it lets others see your face.  I told my wife, who let me borrow the thing from among her school supplies, that because I didn't remove the protective film from off the front it gave everything a bit of a haze which made me think I was in an 80s hair band music video (probably not the vibe the pastor was shooting for during his sermon).  Mrs. Geographist is going to take the shield back during school days, however, so I'll have to either go find one of my own or keep using the mask on weekdays.  After church we headed home to have our final Zoom meetings with our church class.  Our 5th graders are moving up into the youth group!  Finally, we took the dog and a few bags and headed east to spend the night with my parents.  My dad always makes sure the grill gets used on days like this, and then he whipped up a pumpkin pie for good measure.

Monday - I guess other parts of the country say farewell to the summer on Labor Day, although in Texas the thermometer will continue to hit 90 regularly for another month.  That's just fine by me, because it means shorts and pools are still the way to go.  Lots of games were played, there may or may not have been a big splash contest while we went for a swim, and their insurance adjuster came by to go over any hurricane damage on the property.  Whirly is staying for a couple of days to do school with her grandma, so the rest of us said our goodbyes and headed back home to start the short week.

Tuesday - What is there to do around the house when everyone leaves?  I needed to do some yard work, but the weather decided watering our plants was obviously more important.  My work folks had a few virtual meetings and some work requests, but nothing that required all of my attention.  So why not do a little baking?  That's right, yours truly is still trying to get more useful in the kitchen.  Today's experiment involved trying to clear out a few extra fridge items that I knew wouldn't make it much longer: peaches and pie crust.  It may not have been the fanciest cobbler the world has ever known (with a top that reminded me more of biscuits), but nobody seemed to complain about the taste once they got around to eating a bit.  I also decided to start a new book, and opted for a wildly popular selection I'd never taken the time to read: Lord of the Rings.  Most of my reading has been focused on self-development and history, not so much on entertainment and fiction.  But I loved the movies and my brother has always enjoyed going back to take in J.R.R. Tolkien's works many times, so why not give it a spin?  A quiet house is rarely as fun as a noisy one, even when we swear we'd like some peace, so after managing to keep myself busy for the bulk of the day it was nice to get everyone back after schools let out. 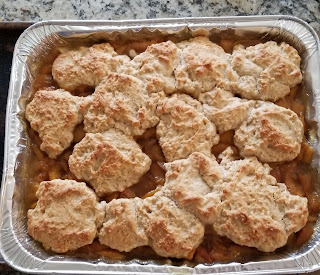 Wednesday - After getting everybody off to their respective campuses, my schedule and the rain finally agreed to let me trim the lawn back a bit.  My neighbors were likely relieved.  A little bit of work, a few household chores, and just a touch of reading filled up the remaining hours until the girls got out of school.  That was not the time to relax, however, as our calendar has started picking up lately.  I had to run east to meet my parents halfway to their house in order to pick up Whirly, while Mrs. Geographist went west to church choir rehearsal.  Back at the house, it was time for fantasy football.  I've run a league for years, which has comprised various coworkers, folks from church, and family members.  This year we had an opening for a certain 10th grader who lives in my house, so Girly gets to run a team.  She has lots of questions, but I'm optimistic she'll gravitate towards hanging out with me to watch games if she has some sort of rooting interest for particular players.  I'd say she actually did a decent job of following along during the draft and putting together a decent squad. 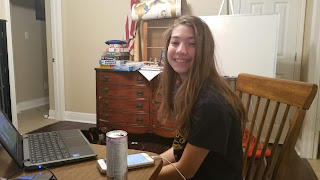 Thursday - Back to my job as a homeschool dad, so why not spend some time outdoors?  Whirly has begun to study warm-blooded animals in science, so we hit the trail to scope out some birds.  Being close to the creek we've typically got a random heron, crane, or egret attempting to reduce the fish population, plus a good assortment of wrens, cardinals, pigeons, crows, and a few other bird varieties to be seen.  Once in a while you'll catch a hawk or a vulture hanging out as well.  Once back in our friendly (and air-conditioned) confines, she hit the books and knocked out a math test.  Over lunch she decided to watch at least a dozen different School House Rock episodes while she slowly munched on her meal and some of the leftover cobbler we'd set aside for her.  After school it was time for me to take Curly to her piano lesson, while Girly went to snag a fast food dinner with friends before color guard practice.  Mrs. Geo had "breakfast for dinner" ready by the time we got home, and she headed off to our room for a discipleship group Zoom meeting while I poked around following the sports of the evening.  It certainly feels like our activity level is ramping up to a decent level. 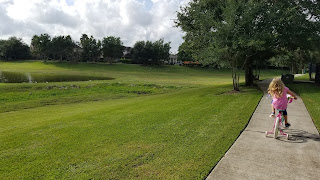 Friday - Curly tends to forget things this year.  Whether it's waiting until the last minute to do homework, not putting something in her backpack on the way out the door, or just not having us sign something that she needs for class, she's being forced to mature and own her goofs.  Today it was a nutrition label that was cut off a box of crackers, but when I saw it lying around I had to laugh.  See if you can see why in the pic below.  She was saved by a CapriSun in her lunch, which gave her the nutrition information she needed for her assignment.  Back home there were just two tests, a new spelling list, and Scripture memory left to finish up the school week, so the little one and I were wrapped up early.  So why not have lunch with Mommy?  We snagged some Chick-fil-a (just realizing we've done that in consecutive weeks now) and visited her school parking lot for a quick meal.  After school I picked up Girly and two of her friends for a short stay at our house before another long practice.  Mrs. Geo and I took Curly and Whirly to the Christian bookstore for some random supplies, followed by a trip to our favorite sit-down burger joint to celebrate the end of the week.  Since I've been reading Lord of the Rings and Curly is starting to really get into epic movies, I pulled out Fellowship of the Ring for her to start watching (although it got too late for her to see it all before we had to call it a night). 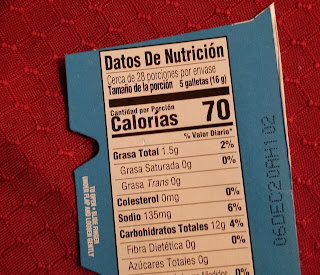 Saturday - Big morning event at church!  Since the next day was promotion Sunday, our children's ministry hosted a parking lot meet-the-teacher so they could say goodbye to their old classes and see who would be taking the reins for the coming year.  We were happy to see several of our crew from last year, and the new 5th graders were very well represented.  By the end of our hour we only had one give-away bag left, so hooray for good planning!  Once back home it was necessary to pick up some pet supplies (one dog and two turtles) as well as electronics accessories, and then finally to catch the end of our movie.  It was best that we avoided the Rockets game, as they got eliminated from the playoffs, but unfortunately none of us stayed around late enough to watch the Astros post a nice 5-run 9th inning to win their contest in comeback fashion.  At any rate, it was a nice win to salvage an otherwise brutal sports week for the home teams.