- July 07, 2020
First of all, happy Independence Day!  I hope you had a chance to celebrate "liberty and justice for all" this past weekend.  Second, my apologies because I am on vacation and do not currently have access to the maps that I usually use to supplement the posts on this site.  I'll be sure to add a map when I am able, just so you can find out a little more about the site we are discussing today: the John J. Smith house.
On the south side of Pinckney Street, just down the street from the Phillips School that we discovered last week, sits the home of John J. Smith.  His first stint in Boston was short-lived, as he arrived in town in 1848 but quickly left for California in search for riches during the Gold Rush.  It was probably to many people's benefit that he never found riches, because upon his return to Massachusetts he not only opened up a barbershop in his neighborhood but also began making positive changes within his community.  In 1850, he supported Benjamin Roberts as he attempted to get his daughter into the Phillips School, and also began to shelter fugitive slaves who had made their way to Boston.  In 1851, he joined a group of protesters that freed a fugitive slave named Shadrach Minkins who was being held in the Boston court house.  Several men and women were sheltered, freed, or assisted in their escape to freedom along the Underground Railroad by John J. Smith and his friends.
The neighborhood barber soon became more.  Bettering himself by going to night school, Smith became involved in politics.  As one of Massachusetts' first Republicans, he attended the party's first state convention.  During the Civil War, abolitionist Governor John Albion Andrew appointed Smith to a position to recruit officers for the state's "colored regiments", and he was later moved to Washington, DC to recruit for the all-black 5th Cavalry.  Once the war was over, he was elected to the Massachusetts state legislature, becoming the third African American to serve there, and the first to serve multiple terms.  In 1878 he moved into the house on Pinckney St. and was elected to the Boston Common Council, where he hired the Boston Police Department's first black officer.
John J. Smith and his wife, Georgianna, raised six children together - one of whom was likely the first black teacher in an integrated Boston public school when she started teaching at the Phillips School.  He co-founded the Bay State lodge of the Odd Fellows and, like his neighbor from the other side of Pinckney St., George Middleton, joined the Prince Hall Masons.  His legacy has lasted far beyond his lifetime, which ended in 1906 at the age of 86, and is symbolized today in the simple brick home.  You can find out more about the man and the home at the National Park Service site here: https://www.nps.gov/boaf/learn/historyculture/john-j-smith-house.htm
UPDATE: 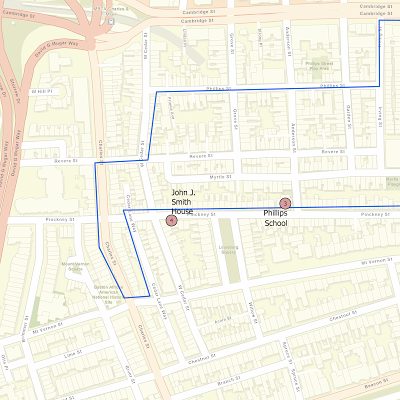