- June 16, 2020
At the edge of Boston Common, directly across Beacon Street from the Massachusetts State House, stands a bronze memorial set in marble.  The image depicts a single mounted officer alongside his marching troops - the men who, at this very location, marched into history on May 28, 1863.  It is Colonel Robert Gould Shaw leading his men to war, and those troops are the 54th Regiment Massachusetts Volunteer Infantry. 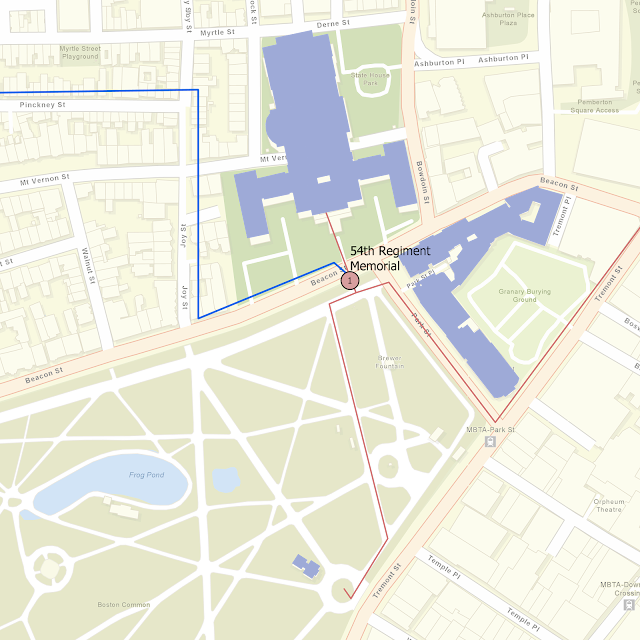 The Civil War began in the spring of 1861, and within a week of the first shots being fired at Fort Sumter, SC, a young man from a wealthy Boston family had enlisted to serve in the Union army.  Within 18 months, young Robert Gould Shaw had fought in several battles (including Antietam), been wounded twice, and had been promoted from private to second lieutenant to captain.  Any cause for celebration that his upward mobility provided, however, would likely have been tempered by the relative lack of success for the Northern troops.  A war that both sides originally believed would be quickly resolved had become a bloody struggle with no obvious conclusion.  Desertion was rampant, and drafts were either avoided or violently opposed.  Abolitionists in the Union, desperate to see victory for their cause to end slavery, recognized an opportunity to provide credibility and respect for those of African descent, and by 1863 they successfully lobbied Abraham Lincoln's Secretary of War, Edwin Stanton, to allow black men to enlist.  Thus, the first regiment of African Americans was formed.
Union leadership recognized the risk.  For all the desire in the North to end slavery, many still had low opinions of the members of other races.  A military unit entirely comprised of black men, whether or not they had ever been slaves, was believed by many to be inferior to their white counterparts and subject to a lack of discipline and professionalism.  As such, a special leader was required to lead the new recruits who looked upon them as equals while overseeing their training and development into a legitimate fighting force.  Massachusetts Governor John A. Andrew believed Captain Robert Gould Shaw was the man for the job.  The young officer arrived in his hometown of Boston on Feb. 15, 1863 to take command, and within three months had been promoted first to the rank of major and finally to that of full colonel.  He was just 25 years old.
On May 28, 1863, the 54th Regiment marched through the streets of Boston to awaiting ships which took them south into combat.  Less than two months later, on July 18, they would participate in an assault on Fort Wagner in an attempt by the Union to capture Charleston, SC.  The 54th Regiment sustained heavy losses during the attack, and Colonel Shaw was killed while rallying his troops onward.  The Confederate commander, General Johnson Hagood, returned the bodies of all fallen Union officers with the exception of Shaw, who was thrown into an unmarked common grave alongside his troops.  Intended as an insult to the man who led black men into battle, it instead became a point of pride for the Shaw family back home in Boston.  Frank Shaw, Robert's father, wrote in a letter that "We can imagine no holier place than that in which he lies, among his brave and devoted followers, nor wish for him better company – what a body-guard he has!"(1)
The Second Battle of Fort Wagner, while a loss for the Union, was a victory for the recognition of black soldiers.  One of the 54th's own, Sergeant William Carney, became the first African American recipient of the Congressional Medal of Honor for saving the American flag despite being wounded three times during the fight.  The actions of Shaw, Carney, and the rest of their regiment became the impetus for increased use of all-black corps and the enlistment of approximately 180,000 black men over the remaining two years of the war.  Their refusal of pay for 18 months of service until granted equal earnings as their white counterparts insured that both they and those who followed in their footsteps would be recognized as being equivalent in all aspects.  On the back of the monument, just above the names of the 62 men of the 54th Regiment who died at Fort Wagner, are the words of tribute by Harvard's President Charles W. Eliot:

The White Officers taking life and honor in their hands cast in their lot with men of a despised race unproven in war and risked death as inciters of servile insurrection if taken prisoners besides encountering all the common perils of camp march and battle. The Black rank and file volunteered when disaster clouded the Union Cause. Served without pay for eighteen months till given that of white troops. Faced threatened enslavement if captured. Were brave in action. Patient under heavy and dangerous labors. And cheerful amid hardships and privations.

Together they gave to the Nation and the World undying proof that Americans of African descent possess the pride, courage and devotion of the patriot soldier. One hundred and eighty thousand such Americans enlisted under the Union Flag in MDCCCLXIII–MDCCCLXV.