- May 19, 2020
This week we cross the water where the Charles River empties into Boston Harbor, much as Paul Revere did all those years ago.  Our destination is the oldest commissioned naval vessel in America (and oldest currently afloat in the world), USS Constitution - a ship that was built, interestingly, using fastening bolts and copper sheathing provided by Revere himself!  She resides in the Charlestown Navy Yard as the namesake of the USS Constitution Museum, and is still crewed by naval officers to "preserve, protect and promote" both her and the U.S. Navy. 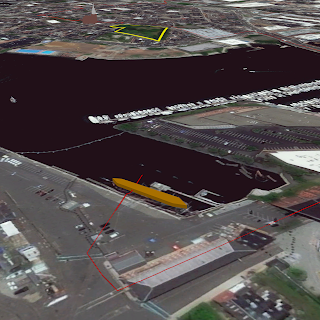 When Americans finally achieved independence, it became clear that a naval presence would be necessary to protect the assets and interests of the fledgling nation.  After the Continental Navy was disbanded following the war, the remaining ships had been sold to help pay debts (although only 11 of the original 65 boats had survived the war).  Launched in 1797 from Edmund Hartt's shipyard in Boston, USS Constitution represented one of six warships that were built in six different ports along the Atlantic coast as a response to Mediterranean and African disruptions to American merchant shipping.  The so-called Barbary Coast nations of Algiers, Tunis, and Tripoli engaged in piracy against American ships, as neither the British nor French navies were willing to come to their aid.

USS Constitution saw its first action, not against the pirates, but against America's old ally: France.  Due to the overthrow of France's monarchy the United States declared that repayment of debts was no longer necessary to the new regime.  An undeclared series of hostilities at sea in the West Indies resulted, and the new naval strength of America acquitted itself well.  After successfully capturing the French vessel Niger in limited service and finally seeing an end to fighting between the United States and France, USS Constitution was finally able to cross the Atlantic to participate in the First Barbary War that finally put the pirate activities to rest.  The peace treaty was signed on her deck.

It was during the War of 1812, however, that USS Constitution realized lasting acclaim.  During a battle against HMS Guerriere, a sailor noted that British cannon fire had little impact on the strong oak timbers by shouting, "Huzza!  Her sides are made of iron!"  The name stuck, and after capturing or destroying seven British ships by the end of the war, "Old Ironsides" served for another 40 years before being retired from active military service in 1855.  Today she resides alongside her more modern sister from WWII, USS Cassin Young, and both are maintained as a partnership between the U.S. Navy and the National Park Service.  You can discover more about the ship's history and modern mission at each entity's website: https://www.navy.mil/local/constitution/ and https://www.nps.gov/bost/learn/historyculture/ussconst.htm